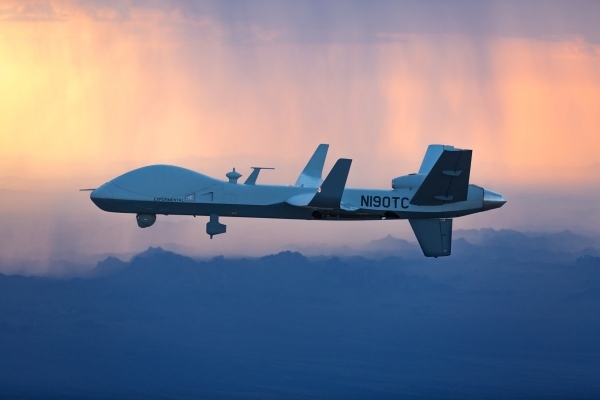 The MQ-9B recently set an endurance record of more than 48 hours of continuous flight. (Photo GA-ASI)

The aircraft will then be on static display July 13 to 15 for the Royal International Air Tattoo (RIAT) airshow being held at RAF Fairford. The flight and display will help commemorate the RAF’s centenary celebration (RAF100).

“GA-ASI is proud to have supported the RAF over the past decade with our MQ-9 Reaper. In honour of the RAF100 celebration, and to demonstrate a new standard in RPA flight endurance, we will fly SkyGuardian across the Atlantic,” said Linden Blue, CEO, GA-ASI. “Given the distinguished 100-year history of the RAF, we believe that this flight is an appropriate way to celebrate the RAF’s position as a leader in innovation.”

In 2017, GA-ASI and the RAF marked the 10-year anniversary of RAF MQ-9 operations, which coincided with the RAF completing 100,000 flight hours with its Reaper force. The entire Reaper fleet has completed over two million flight hours to date and is comprised of over 300 aircraft within the NATO alliance. The RAF is acquiring MQ-9B SkyGuardian as part of its PROTECTOR RG Mk1 program.

MQ-9B is the latest evolution of GA-ASI’s multi-mission Predator B fleet. GA-ASI named its baseline MQ-9B aircraft SkyGuardian, and the maritime surveillance variant SeaGuardian. MQ-9B is a certifiable (STANAG 4671-compliant) version of the MQ-9 Predator B product line.

The company explains its development is the result of a five-year, company-funded effort to deliver a RPA that can meet the airworthiness type-certification requirements of various military and civil authorities, including the UK Military Airworthiness Authority (MAA) and the U.S. FAA. GA-ASI explains type-certification, together with an extensively tested collision avoidance system, will allow unrestricted operations in all classes of civil airspace.

Several important MQ-9B milestones were achieved in recent months, explains the company, including the first FAA-approved flight for a company-owned RPA through non-segregated civil airspace without a chase aircraft, and an endurance record of more than 48 hours of continuous flight.

As part of the transatlantic flight, GA-ASI has partnered with Inmarsat, a provider of global mobile satellite communications (SATCOM) services. Inmarsat’s SwiftBroadband SATCOM will be used by the MQ-9B’s ground control station to communicate and control the aircraft and also will be used in the RPA’s final configuration for capabilities such as automatic takeoff and landing.