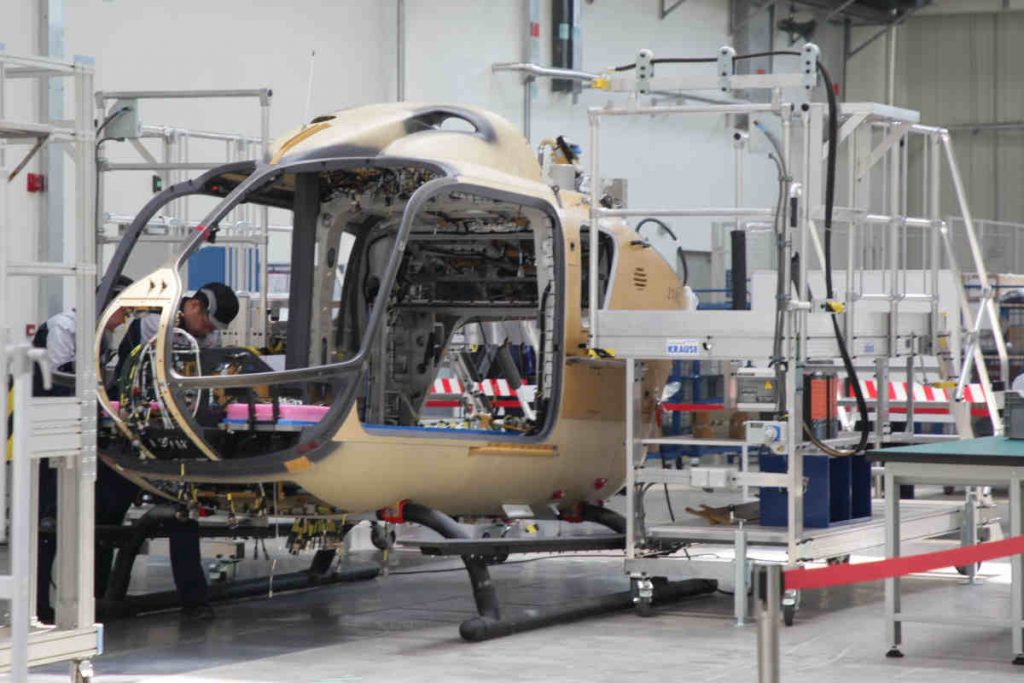 Airbus estimates China has a potential demand for 600 light twin-engine helicopters over the next two decades. (Photo: Airbus)

“Beginning to manufacture H135s in Qingdao marks the start of a new chapter of Sino-European collaboration, as we become the first foreign helicopter manufacturer to open a manufacturing facility in China,” said Marie-Agnes Veve, general manager of Airbus Helicopters China.

Opening of the FAL in Qingdao follows a cooperation agreement signed between Airbus Helicopters and China in 2016 for the purchase of 100 H135s destined for the Chinese market. Ninety-five of these 100 helicopters will be assembled on this FAL from 2019 onwards.

Primary helicopter components, including the main fuselage, main gearbox kits and rear fuselage, will be shipped to Qingdao from Donauwörth, Germany, and Albacete, Spain, for H135 final assembly.

The Qingdao plant is composed of four working stations, a paint booth, ground and flight test areas, and a delivery centre. The site will employ around 40 people, including 23 employees who received on-the-job training in Donauwörth.

The first H135 aircraft to be completed in Qingdao is expected to take place in the second half of 2019. Operations will start with an annual capacity of 18 helicopters, which Airbus states could be doubled to accommodate future growth.

Airbus describes the H135 as one of the most-popular light, twin-engine helicopters in China, mainly operating in helicopter emergency medical services (HEMS), search and rescue, law enforcement, firefighting and tourism. To date, around 1,300 helicopters from the H135 family are in operation around the globe, having achieved more than 5 million flight hours.

Airbus has had a presence in China for more than 50 years, which the company points to as a main reason for why it holds the leading position in China’s civil helicopter market with around 300 helicopters in the country, serving 83 customers. Airbus estimates China has a potential demand for 600 light twin-engine helicopters over the next two decades, based on the country’s development of the HEMS, public services and offshore wind industries.