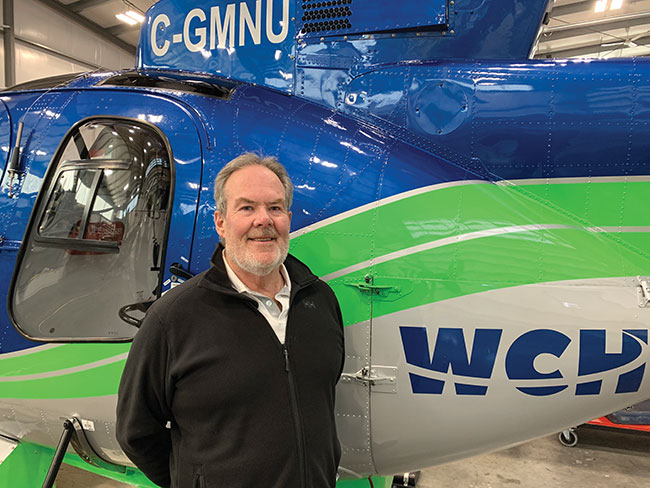 At West Coast Helicopters’ office in Port McNeill, Mike Aldersey and his team are excited. Aldersey has been named as the recipient of the Agar/Stringer Award – a coveted award bestowed by the Helicopter Association of Canada on select few Canadians for their outstanding contribution to the industry.

In his 42-year long career, Aldersey holds an impeccable record of over 30,000 accident-free-hours as pilot in command. But that didn’t stop him from being “shocked” when he found out he was getting an award.

“I didn’t even know I was nominated,” said the 65-year-old pilot, who lives in Courtenay, BC, when he is not at his Port McNeill office. “The past recipients of this award are some pretty impressive people in the Canadian helicopter industry so I feel quite humbled and quite proud to be considered to be in that league.”

But even for an industry giant like Aldersey, excitement comes along with existential troubles that online conventions bring along. As he prepared to accept his award – which was presented virtually on Dec. 1 – he had a few lingering questions.

“How are they going to do this online? Will they just announce my name? Do they expect a speech from me? I don’t know.” Either way, the 65-year-old kept a speech ready, just in case.

Aldersey grew up with aircraft zooming overhead in Trenton, Ontario. Living near an air force base was a strong influence on him as a 10-year-old boy. Even then, Aldersey knew that he wanted to fly in a bush environment as opposed to airline routes. And he got his wish. Aldersey has flown for air ambulance services, forest firefighting across the country, logging industry operations, tourism charters and heli-skiing adrenaline junkies.

He’s been a part of many exciting journeys, including wildlife surveys in the high Arctic, rescue missions, and medical evacuations among others. But forest firefighting is an experience that has been the closest to his heart.

“Supporting the forest firefighting industry is one aspect that I have quite enjoyed in my career,” he said.

That’s also because he can put to good use his specialty in vertical referencing – also called long-line work, which includes slinging loaded 50- to 200-foot length long lines from place to place.

In 1978 he got his helicopter license from Canadore College in North Bay, Ont., and since then he has had the opportunity to work across provinces. But that also meant remote locations and 16 years of being away from home for almost 240 days a year.

His wife Paula was “extremely supportive,” and Aldersey makes it clear that without her, they wouldn’t have gotten far in his career at all.

Their family of five moved to Vancouver Island in 1993 and since then Aldersey has been the Port McNeill base manager with Prism and West Coast Helicopters. “I was able to spend more time with my family.” Now, apart from being home, BC’s coast has become the most soothing sight from up above for Aldersey. With bases in Port McNeill, Campbell River, Nanaimo and Bella Coola, he gets to see a lot of the coastline.

“I never get tired of the B.C. coast. It’s pretty spectacular and although it’s my daily routine, I still have to pinch myself sometimes.”

Along with mind-blowing hawk-eye views from the sky, his career also gifted him some of the most “interesting experiences.”

Aldersey has had the opportunity to meet and work with various people who do different types of profound work.

“With this type of work – helicopter support – you’re transporting a lot of different industries and people. And it’s like my career, I mean, I’m involved in many many other different careers,” he said.

“That’s the beauty of it! It’s a fairly exciting job because you get to see and experience a lot of different jobs along with your own.”

A lot has changed in the past 42 years – Aldersey is a grandfather to five, his favourite chopper Hughes 500 is now an MD 500D and the helicopter industry reflects the passage of time, too.

But even then the adrenaline rush that floods him when he powers his MD 500D for a take-off is still the same. And that’s a feeling that Aldersey is not yet ready to hang up.

“Flying has been my passion for 42 years, I still quite enjoy it and I don’t have plans on retiring anytime soon, he said. “We’ll see how much longer I can keep up it.”

2020 Agar Stringer Award Winners
Two trail blazing icons, founders of Okanagan Helicopters, inspired the creation of the Carl Agar/Alf Stringer Award for outstanding contribution to the Canadian Helicopter Industry. From time to time HAC bestows that Award upon someone who has followed their lead, including this year’s three recipients.

Mike Aldersey graduated from Canadore College in 1978, and started his career with Ontario Helicopters in Thompson Manitoba. Since then, he worked with Northern Mountain, Prism, Lakelse, and most recently with West Coast Helicopters. In 2020, he passed 30,000 accident-free hours. He has extensive  long-line  experience, mostly in the mining and logging  industries, but he also  has experience in the heli-skiing and forest protections sectors.

Tony Walker has provided safety awareness courses through his career on his own to important helicopter users. He trained as an AME at BCIT in 1987 and apprenticed with Delta. He learned to fly at Alpine with Jim Davies and started his flying career with Canadian. He’s flown in a variety of places including the Arctic, BC, Kuwait, and Iraq after the Gulf War. But most of his career was spent in BC’s coastal mountains. Walker was inspired him to start his own business and he designed a program to transfer safety knowledge between adults to teach recurring helicopter passengers the fundamentals of Crew Resource Management. He still flies as a contract pilot for CHL, but is primarily involved with his own company called Advanced Crew Solutions.

Terry Dixon started his helicopter career in the 1970s as a flight instructor before joining Okanagan, CHL, Western and Frontier, focusing on heli-logging, firefighting, heli-skiing, aerial construction. In 1984 he received the prestigious Start of Courage Award for conspicuous courage during the helicopter rescue of the survivors of a plane crash near Chilliwack, BC. Today, Dixon runs his own successful independent safety consulting service primarily for the BC and Alberta governments. He has now accumulated roughly 11,000 hours.

Binny Paul writes for the Campbell River Mirror. Her reporting is funded by the Canadian government through its Local Journalism Initiative.