Hayes Helicopter Services Ltd. has been making a name for itself in British Columbia aviation for some time. But for the Duncan-based company, a subsidiary of Hayes Forest Services Ltd., a slowdown in its mainstay helicopter logging work is forcing corporate decision makers to explore new markets and services... 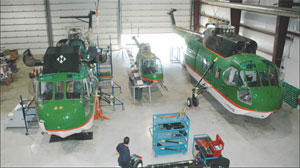 Hayes Helicopter Services Ltd. has been making a name for itself in
British Columbia aviation for some time. But for the Duncan-based
company, a subsidiary of Hayes Forest Services Ltd., a slowdown in its
mainstay helicopter logging work is forcing corporate decision makers
to explore new markets and services, and to set up operations across
the rest of Canada and around the globe. In addition to securing
additional hours for its fleet of three Sikorsky S-61N heavylift
helicopters and four Bell 206 JetRangers, the company is aggressively
seeking aircraft maintenance and repair work worldwide.

“We
are one of only a handful of facilities globally with the expertise to
repair and overhaul Sikorsky S-61N helicopters,” explains company
president Donald Hayes, who readily admits that a self-professed love
of helicopters has motivated him to drive the aviation side of his
family-owned business forward. “We started out as a logging company on
BC’s coast, and initially helicopters were just another type of
equipment or tool for us. Right now, the coastal logging industry is
facing some challenges and that has impacted the amount of helicopter
logging we were able to secure here at home, so we started to look
outside of BC’s borders. We have found the heavy-lift market to be very
active around the world and that has not only been good for that part
of our work, but it has also resulted in our component and new engine
shops having a steady stream of business, both internally and
internationally.”

For Hayes, the foray into foreign markets
doesn’t come as a surprise. “We always knew that at some point we would
have a need to start operations outside of BC,” he says. “The current
malaise in the BC coastal forest industry has motivated us to broaden
our operations on the international scene. For heavy-lift work, we
already have several international projects penned, and we have others
that are in the works. We expect to have fully functional international
heavy-lift operations by the end of this year.”

Hayes has a lot
of confidence in all of his team, but especially in Glen Golbeck,
vice-president of operations for Hayes Helicopter Services. He says the
long-time senior member of Hayes Forest Services is an expert in
heavy-lift operations. “Heavy-lift operations are made or broken on how
skillful the operation is, and Glen is an expert in this field,” he
says. “Our focus is on selling our expertise and our ability to ensure
jobs go extremely well due to our operating skill. Glen comes from an
operations background and is leading our efforts in a market that is
filled with some very good lift operations companies. We can
differentiate ourselves by offering proven organizational and
logistical skills, but of equal importance, we have the administrative,
maintenance and operations facilities needed to back up the field work
and succeed at the large jobs.”

Asked about the types of jobs
the company has done, Hayes responds that “We are meat and potatoes. We
have done pole work and ski lift projects. We have righted flipped-over
seaplanes in the Queen Charlotte Islands. But for the most part, we
like to take on jobs that require a lot of repetitive turns, and we do
them well.”

Hayes’ outstanding reputation and track record in
the forest and aviation industries has earned the company a number of
prestigious business acclamations. It was recognized for the first time
in 2001 as one of Canada’s 50 best-managed private companies in a
national competition sponsored by what was then accounting giant Arthur
Anderson Canada and is now Deloitte & Touche, Canadian Imperial
Bank of Commerce, the National Post and Queen’s University School of
Business.

That honour was repeated several times and then in
early 2006 at a gala event in Toronto, Hayes was awarded the same
prestigious title, but this time as one of Canada’s 50 best-managed
public and private companies, not just private companies. The
organizations up for this award are looked at for durability, meaning
they are judged for the ability to perform and manage well in tough
times as well as good times. According to Hayes, other common best
practices among this year’s winners include “a strong emphasis on
culture and people, a commitment to innovation and strong financial
results.”

“Culture” and “people” are two words that have been
the cornerstone of the company’s success. In many ways, it is the
“little things” that make the Hayes culture what it is. It is the
almost seamless enlarged watercolour print by Victoria, BC, illustrator
Russ Willms that covers most of the warm and inviting rotunda entrance
lobby at the corporate headquarters; the etched glass nameplates on
offices and cubicles; the fully-equipped employee gym; and the employee
lounge with leather couches, a gas fireplace, a full kitchen and a
fancy espresso machine, which Hayes says was “a payback to the
employees for giving up their lunchroom for five years when we needed
space and outgrew our previous facility.”

These “little things”
add up to what Hayes strives for – making his company an exceptional
place to work. “We have built a corporate culture around our people,”
he maintains. “What this has done is allowed our employees to create an
environment where they want to excel and outperform our competition.
Many years ago, we discovered that if you set the standards high on the
things that seem superficial, your employees will expect and deliver
those same high standards on things that are important. If you set
standards that dictate an organized office and a building that is clean
and tidy, you are setting the stage for higher standards when it comes
to things that are important to our customers.”

In the
helicopter repair and maintenance side of the business, that stage has
become a showpiece, with meticulously organized storage and inventory
systems for parts, a clean work area for the technicians, and
management systems that ensure efficiency in terms of cost and time.
Hayes says he is “extremely proud” of these management systems. “We
have developed these systems over a long period of time and they have
become crucial to the success of our business. They include integrated
management teams, customized computer information systems, and
financial management systems that address each of the primary operating
functions of our business.”

With a firm commitment to management
systems and quality, Hayes has been successful in achieving ISO
(International Organization for Standardization) designation in several
areas including environmental management, and quality management
systems (QMS) for forestry and engineering. On the aviation side,
Deloitte & Touche completed a registration audit in 2004 of the
Hayes office and shop facilities and Hayes Helicopter Services. That
audit resulted in the company being granted an ISO 9001 registration
certificate. Hayes is now seeking ISO 9002 certification for its
component shop.

With an increased percentage of Hayes’ overall
business coming from the Helicopter Services subsidiary, the company
has invested heavily in the Duncan facility. Today, it runs a component
and airframe overhaul shop that is both Transport Canada and European
Aviation Safety Agency approved for the Sikorsky S-61N and Bell 206
series helicopters. The fly-in facility includes a 3,200-square-foot
component shop; 3.200 square feet for heli parts storage; a
6,720-square-foot hangar; 7,200 square feet of conventional shop space;
and a 1,250-square-foot engine shop. At the facility, Hayes can handle
the overhaul of all dynamic components on the Sikorsky and Bell
aircraft. It can also complete heavy maintenance inspections, has level
II inspection capabilities and can handle non-destructive testing
through fluorescent magnetic particle inspection (MPI) and fluorescent
liquid penetrant inspection (FPI). For cleaning components, the
facility is equipped with plastic recoverable air blast media (PRAM)
and glass bead media, along with a 20×8-foot walk-in blast cabinet and
Varsol degreasing booths and vapour degreasing.

Hayes has an
extensive inventory of parts and has developed aircraft- specific
inventory control software and custom maintenance tracking software,
providing a preventive approach to maintenance for its own fleet and
customers’ aircraft, while minimizing downtime and maximizing
helicopter and component life.

“On the service side, a large
percentage of the business we are receiving from the rest of the world
is component work,” Hayes notes. “We are always having components flown
in from various regions for rebuilds and servicing and we have
developed an excellent reputation for on-time delivery and quality.”

Hayes
says that to be successful a company must also have a goal. “We know
that through our company culture, we have a group of employees that is
obsessed with standards and quality and getting things done. However,
over the past few years, we have been a little more introspective and
have formulated a clear focus on what we are trying to achieve. We have
set goals for Hayes Helicopter Services, and with the culture and the
people we have in place,