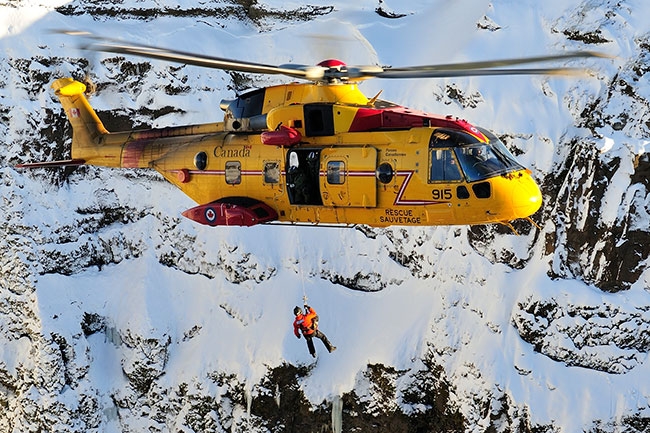 The two-day event is the largest and most important defence industry event in Canada and it serves as an opportunity for defence companies to strut their stuff when it comes to new innovations, platforms and products, and new collaborations which are oriented primarily for the Canadian market. Hosted at the EY Centre, this year’s show attracted more than 11,000 registrants from 61 countries with some 700 booths.

Cormorant Mid-Life Upgrade proposed
The biggest helicopter story during CANSEC was that of Leonardo Helicopters re-establishing “Team Cormorant” as an effort to position itself to secure a contract for a CH-149 Cormorant Mid-Life Upgrade (CMLU) and conversion project. Team Cormorant comprises of Leonardo Helicopters, the Original Equipment Manufacturer of the EH101/AW101 helicopters; IMP Aerospace, the Prime Contractor for Cormorant In-Service Support; and other key Canadian companies who will supply and support aircraft components, technology, systems, simulation and training.

The Royal Canadian Air Force (RCAF) began operating the CH-149 Cormorant in 2000. Like most platforms these aircraft have had their share of challenges, however fleet reliability and mission availability have steadily increased over time. That persistent mission, search and rescue (SAR), is deemed by the RCAF to be a “no-fail” mission. The 14 CH-149 helicopters are very capable aircraft, however they are noticeably deficient with regards to modern sensors which have become ubiquitous in SAR operations; key among these are electro-optical infrared (EO/IR) sensors and search radars.

Sean McElliott, senior product marketing manager at Leonardo Helicopters spoke with Helicopters magazine about the CMLU. “We’ve looked at the Cormorant fleet and realized there are some challenges regarding obsolescence and through-life cost of ownership, so we put an unsolicited bid to the Canadian Government last year to say we’ve got technologies on the aircraft that we’re manufacturing today for our export customers, like Norway, which we believe would benefit not only cost of ownership but also give much greater capability to the SAR fleet,” McElliott said. “What we’ve done is leverage the package that we have on the Norway aircraft, packaged that with bits that we think are pertinent to Canada, and offered that in our proposal.”

Team Cormorant proposes to leverage the fleet of VH-71 Kestrel helicopters which the Canada acquired from the U.S in June 2011 for $164 million. These aircraft were originally meant to be used as spare parts and are being housed at IMP facilities in Halifax.

If successful in its bid, Team Cormorant proposes to modernize the VH-71 fleet into an upgraded Cormorant configuration, which will allow existing CH-149s to enter the CMLU without any interruption of SAR service. Once all aircraft are upgraded and harmonized to a common standard, the RCAF will have the additional aircraft required to re-populate CFB Trenton, which is currently fielding smaller and shorter range CH-146 Griffons in a SAR role.

The common fleet of upgraded Cormorants would incorporate a new Rockwell Collins glass cockpit, new aircraft management system, new communications systems, new navigation systems, FADEC engines, EO/IR sensor, a surveillance radar, advanced vision enhancement, and more.  “With the upgrade and enhancements that we’re proposing, the Cormorant will be optimized for continued SAR service out to 2040 and beyond,” McElliott said.

CHC proposing SAR service during Cormorant Mid-Life Upgrade period
Also in attendance at CANSEC was CHC Helicopter, a global firm well known for providing offshore transportation to the oil-and-gas industry, flying SAR and emergency medical missions and delivering maintenance/repair/overhaul and support services. The company is keen to position itself as a provider of helicopter SAR in Canada while the proposed Cormorant Mid-Life Upgrade takes place.

“The Cormorant Mid-Life Upgrade will likely take two or three aircraft off front-line service over a six year period,” Mick Fry, director of sales and commercial, SAR/EMS at CHC Helicopter said. “A potential option which we’ve suggested to the government is that they put a temporary commercial solution in to backfill that capability loss. We’re proposing to backfill Cormorant bases with our S-92 or AW189 aircraft, which would take pressure off the SAR system during the CMLU.”

CHC is currently providing SAR service for the Australian military, Irish Coast Guard, and others.

Swirling Cyclones
As our regular readers know, the CH-148 Cyclone Maritime Helicopter was grounded after a flight control incident occurred earlier this year. Sikorsky identified that the root cause of the incident was isolated to the software in the Flight Control Computer (FCC), and that there were no external or aircraft-specific contributors to the event.

The FCC software where the root cause was isolated is common across all CH-148 aircraft. According to a company spokesperson: “Given that we understand the FCC software, we were able to define a safe operating envelope for the aircraft to resume flight operations. A software modification is in progress to eliminate the issue and return to the full CH-148 flight envelope. A software modification that eliminates the issue will be in place prior to Block 2 deliveries. The overall impact to the schedule is still being assessed and we are working closely with Canada to mitigate the impact to the CH-148 schedule.”

Sikorsky Flight Test aircraft resumed flights April 27, and aircraft at Shearwater resumed flights May 16. Aircraft initially started flying with conservative flight limits as the investigation progressed. Now that the investigation is complete, there is a flight envelope in place that ensures safe aircraft operation while allowing the RCAF to progress training and initial operational test and evaluation. Six Block 2 aircraft are on track for delivery in June 2018.

The remaining aircraft will deploy to their respective bases once pilots complete their type certification training in Ottawa, after which they will ferry aircraft to their new home bases. All seven Coast Guard Bell 412EPI aircraft are expected to be in service by October.

“The 412EPI gives us faster speed, and because it has more internal fuel we can get cabin volume back since we don’t need to fly with auxiliary tanks all the time like we used to,” noted David Weir, chief pilot – rotary wing for Transport Canada. “The single-engine performance on the EPI is magnificent. There’s a lot of things that we do in the coast guard, like putting towers up, so if we were to lose an engine that that time, we can still hold the piece of equipment up on one engine. That’s a really big deal for us.  The other advantage of the 212 is we have completely new avionics with full glass, stabilized, AFCS – we didn’t have any of that in the 212.  The platform is also capable of doing day, night, and single pilot IFR.”

“Our goal is to optimize situational awareness for our commercial and military customers and ensure their mission success.”

Unmanned helicopters – no pilot, no problem!
Unmanned systems are becoming more prevalent at defence and security exhibitions like CANSEC. Two systems were displayed prominently this year: the QinetiQ Mosquito and the Schiebel/MDA S-100 CAMCOPTER.

The Mosquito is a cost-effective unmanned helicopter target designed primarily for use in military weapons training exercises. The Mosquito can simulate
rotary-wing threats for ground-based air defence, air-to-air pilot engagements or naval ship defence systems. It is also an ideal target for satisfying test and evaluation requirements for new weapon systems.

The Mosquito can be delivered as a system with the QinetiQ Universal Target Control Station.

On display at the MDA booth was a Schiebel S-100 CAMCOPTER Unmanned Air System (UAS). The Vertical Takeoff and Landing (VTOL) UAS needs no prepared area or supporting launch or recovery equipment.

It operates day and night, under adverse weather conditions, with a range out to 200 km, both from land and at sea. The S-100 navigates automatically via pre-programmed GPS waypoints or can be operated directly with a pilot control unit. Missions are planned and controlled via a simple point-and-click graphical user interface, and high-definition payload imagery can be transmitted to the control station in real time.

The S-100 was on display as a potential option for an anticipated Royal Canadian Navy UAS requirement.

The rotary footprint factored prominently at CANSEC 2017. This trend is sure to continue as the RCAF will eventually seek to upgrade or replace its CH-146 Griffon helicopters.