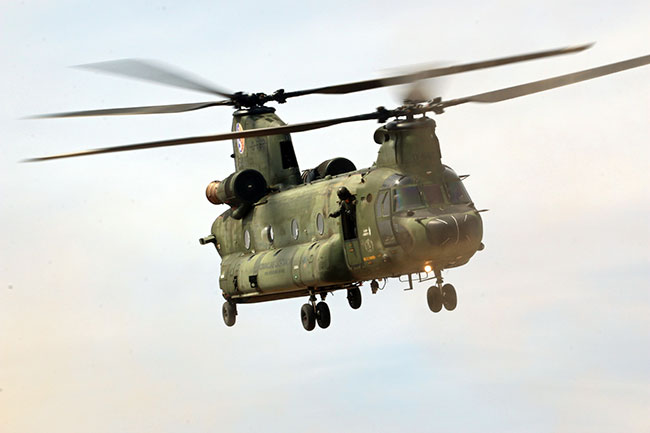 Across the Netherlands multiple low flying areas exist in which crews can train with brown-out landings, being performed here by Chinook D-662 Lady Liberty.

April last year marked the 75th anniversary of the Royal Netherlands Air Force’s 298 Squadron, which at the time was operating 10 CH-47D Chinooks that were previously owned by the Canadian Armed Forces, as it waited for delivery of 20 replacement CH-47F MYII CAAS Chinooks. The first two CH-47Fs arrived in The Netherlands in December 2020 through Boeing Philadelphia. Fifteen of the CH-47F MYII CAAS helicopters will be assigned to 298 Squadron at Gilze-Rijen Air Base and five will remain with 302 Squadron at Fort Hood in the United States.

The 298 Heavy Rotary Squadron is one of four flying squadrons that are part of the Defense Helicopter Command (DHC). Since the establishment of the DHC in July 2008, 298 Squadron transferred to Gilze-Rijen Air Base from Soesterberg Air Base. The purpose of the DHC is to integrate all of the helicopter units of the Royal Netherlands Air Force – AH-64Ds, AS532U2s, CH-47D/Fs and NH90s – under one central command structure across two airbases to save costs. Only the NH-90 fleet of 860 Squadron is based at Naval Air Station De Kooy in the northern part of The Netherlands. The other three units reside at Gilze-Rijen.

The 298 Squadron’s heritage dates back to April 16, 1945, when it was operating at Gilze-Rijen as No. 6 Dutch Auster Squadron with six Austers. Soon after the end of World War II, the Squadron was transferred to the Dutch West Indies. On March 1, 1950, 298 AOP (Air Observation Post) was established. Over the years, 298 has flown various types of aircraft and helicopters. The Austers were replaced by L-18C Piper Cubs and L-21B Super Cubs to support the role of artillery spotters. Its first helicopter arrived in 1955, a H-23B Raven. The Alouette II followed in 1959 for search and rescue. These were replaced by Alouette IIIs from 1964 onwards. Twelve Bo-105C (Bolköw) helicopters were also part of the 298 from 1975 to 1979.

In early 1993, the Dutch government signed an agreement with Canada to acquire seven Boeing CH-147 C-models that were in use by the Canadian Armed Forces between 1974 and 1991. In December 1993, a contract was signed with Boeing for the purchase of 13 modern CH-47D Chinooks with a digital Honeywell Avionics Control and Management System (ACMS) cockpit, as well as improved T55-L-714 engines.

Seven were remanufactured ex-Canadian C-models, delivered between 1995 and 1996, with the other six brand new aircraft, featuring a one-piece-machined airframe structure, delivered to the Royal Netherlands Air Force (RNLAF) between 1995 and 1996. Ten of the CH-47Ds were still on strength in 2020 having lost two Chinooks to accidents in 2005 during operations in Afghanistan, while the oldest CH-47D (D-661) was withdrawn from service in late 2019.

“The accidents in Afghanistan made us realize we had to further improve and hone the training and capabilities of our crews,” explains Captain Roël Boezen “Booze”, Liaison Officer for 298. “Both lost helicopters suffered from a hazardous mountainous and brownout landing during reduced visibility operations, where wind and loss of engine power due to the thin air conditions had impact on the performance of the Chinook. Circumstances we do not encounter when operating in The Netherlands.”

Captain Boezen explains, that as a result of the accidents, RNLAF implemented a new training program consisting of High Blaze exercises, for dedicated mountain flying, and Hot Blaze, for practicing operations in a hot, high and dusty environment. “One of the most challenging conditions to fly in [is] snow, in which you can easily lose your reference orientation,” he says. “Therefore, we have cold weather operations in snowy conditions in the Nordics trained during Cold Blaze… The fourth training (segment) is TAC Blaze with a focus on tactical maneuvers and electronic warfare.”

To cater for the loss of the two CH-47Ds, and for the additional demand for Heavy Rotary Capacity, the Dutch Ministry of Defense signed a new contract with Boeing in 2007 for the delivery of six CH-47Fs, equipped with updated ACMS cockpits (Block6 with partly colour displays), improved self-protection kits, and CHASE (Chinook Aircraft Survivability Equipment). The main purpose of the CH-47F fleet is to serve as a platform for Special Forces Operations.

The configuration includes fast-rope capabilities, new attachment points for on-board weapons, a long-distance communication radio and a Forward Looking Infrared System (FLIR) under the nose. With the latter system, the pilot has improved situational awareness of the surroundings under poor visibility conditions.

The F variant has GPS navigation connected to a radar altimeter. Initially, 298 Squadron had three CH-47Fs (D-890/891/892). To complement 302 squadron in Ford Hood, CH-47F D-891 was transferred to the U.S. during 2015. The remaining two F models were shipped back to Boeing in March 2019 in support of the current RNLAF Renew Program.

Two of the CH-47Fs (D-894/895) assigned to 302 Squadron were ferried to Boeing in April 2020, with the last two (D-891/893) following in early June 2020. In anticipation of the arrival of the new CH-47F MYII CAAS fleet, 300 hours of base maintenance inspections are diminishing for the existing CH-47D fleet, but will continue until Initial Operation Capability of the new CH-47F fleet. It is currently uncertain what the fate will be for the remaining CH-47Ds. Two are foreseen to be used as instructional airframes and one is planned to be delivered to the National Military Museum at Soesterberg. 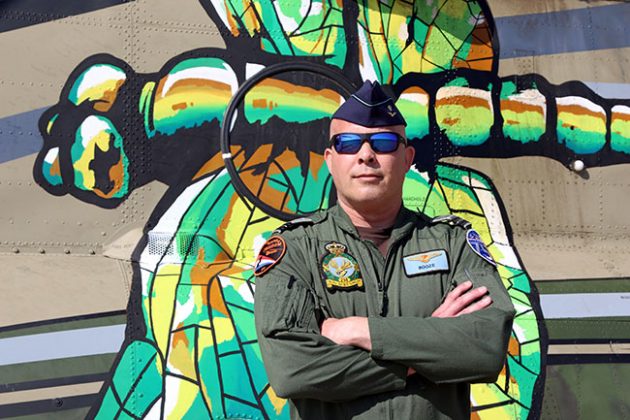 In the period from 2010 to 2015, The Netherlands prepared for the replacement of the ageing D-models, as well as the expansion of the Chinook fleet with three helicopters. After extensive deliberations, the standard U.S. Army MYII CAAS configuration was considered to be the most efficient choice as a successor. The Netherlands was able to utilize options in the existing MYII production contract between the U.S. Army and Boeing. For that, the Letter of Offer and Acceptance with the U.S. Army for 14 new CH-47F MYII CAAS Chinooks was signed on November 12, 2015.

On April 14, 2016, the U.S. Department of Defense awarded Boeing a contract to build 12 CH-47Fs followed by an additional order on April 28, 2017, for the remaining two new CH-47Fs. In order to prevent a mixed fleet of CAAS and ACMS Chinooks, which would have been costly during the sustainment of the fleet, it was then decided to renew and modernize the six ACMS F-models. On December the 14, 2017, The Netherlands and Boeing signed the Direct Commercial Sales contract for the Renew Program, converting the six ACMS F-models into the exact same configuration as the 14 new Chinooks.

Operating the standard MYII CAAS Chinook will allow for further optimization of operations, training and maintenance. “We have had a lot of contacts with the U.S. Army and the Australian MOD being existing operators to understand potential challenges we might encounter when fielding the new Chinooks,” says Colonel Koen van Gogh, Senior Project Manager Defense Material Organization (DMO), who is responsible for the replacement and modernization program. “When we deliver them to the RNLAF, we want to make sure that there are no obstacles and that they will be able to operate and sustain the helicopters during the first three years. This period will allow the RNLAF to become self-supporting when it comes to in-service support.

“Around 2,500 parts of the legacy CH-47Fs will be reused. These parts will be overhauled (zero hours status) before being installed on brand-new MYII CAAS airframes,” adds Colonel van Gogh. “This option turned out to be more efficient and affordable than modifying the legacy CH-47F fleet. The first idea was to just replace the ACMS cockpit of the legacy Fs by a MYII CAAS cockpit. We concluded the risk was too big in terms of certification and costs. The legacy CH-47Fs are now sent to Summit Aviation who is tasked by Boeing under the Renew contract to remove the usable parts from the helicopters and have them delivered into the overhaul process.”

The new CH-47F MYII CAAS Chinook comes with the short nose, which differs from the current F version in appearance. This meant there is no room for our current Weather Radar. Also, the FLIR system under the nose will not be implemented. Another striking difference is the Woodland Desert Sage Color Scheme, instead of the current grey scheme. Additional Dutch requirements include Crashworthy Crew Seats with ballistic protection, leading to modified Multi-iFunctional Control Units, a LH removable escape hatch, a Hook Load Measuring System, an Ice Detection System, a Pitot Heater Failure Indicator, Fast Rope Ingress and Egress System, and a minor change to electrical.