Canada’s hot spot got a little hotter last week. Lytton, B.C. routinely clocks in with the highest daily temperature in the country every summer. The village lies at the junction where the clear blue waters of the Thompson River system join the muddy flow of the Fraser River northeast of Vancouver, 156 kilometres as the crow flies or 260 kilometres if you follow the highways. As you drive up the 100 kilometers on Highway 1 from Hope to Lytton, the scenery gradually changes from the temperate rain forest of the coast to the dry and dusty land of sagebrush and tumbleweeds. Temperatures commonly soar into the 40s through the summer months and the heat can be more intense as it is radiated by the steep slopes of the river valley. 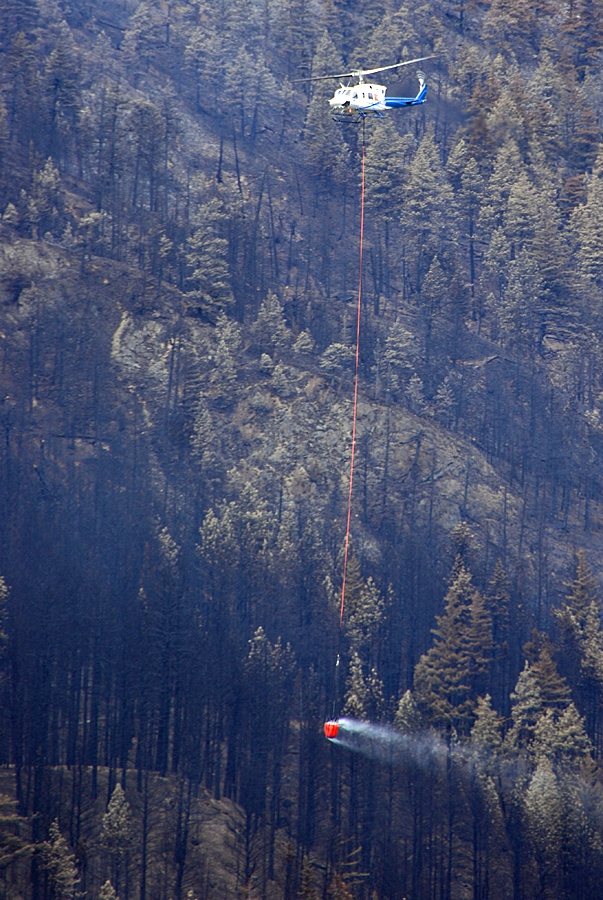 Last Thursday afternoon, a CN track maintenance crew was conducting grinding operations along the mainline about five kilometers west of town. At some point, sparks ignited nearby undergrowth and despite the best efforts of the crew, the fire exploded up the slope, quickly covering 400 hectares. Initial firefighting efforts were hampered by winds that gusted to 80 km-h in the region, driving the fire to Rank 5. A change in weather in the region on Friday, including a light rain, had little appreciable effect on the fire, which grew to a reported 1,300 hectares by Saturday.

More than 100 firefighters were on the ground by Saturday, supported by 10 helicopters, working to contain the fire. Crews on the ground were working on steep slopes in temperatures that ranged up into the mid-30s.

When Helicopters visited Lytton on Monday afternoon, the winds had died down to a bare breeze and crews were racing to solidify their perimeter around the fire to allow it to burn itself out. Viewing the fire from shoulders of Highway 1 on the opposite side of the Fraser Canyon had become a spectator sport. Local residents, passing tourists and B.C. Wildfire officials alike stood in small groups and discussed what had happened in the preceding days and what was happening before their eyes.

Helicopters was fortunate to meet Kayla Pepper, information officer with the B.C. Wildfire Management Branch, just as she was updating information on a temporary bulletin board that had been erected at roadside. At that time, around noon on Monday, it had become a waiting game. Crews were hard at work, out of sight on the other side of the canyon, trying to consolidate their fireguards. The question that weighed on everyone’s mind was when the wind would start to blow, how strong would it be and which direction would it blow.

In the meantime, crews were conducting controlled burns around the fire. A helicopter could be seen drip-torching high up on the mountain, while a second helicopter was proactively bucketing around a controlled burn area on the opposite end of the fire. Pepper said that it had quickly been decided that the terrain in the area of the fire dictated that it was not feasible to used fixed-wing tankers. The steep canyon, coupled with gusting winds in the initial phases of the fire made it too dangerous for tankers and could hamper helicopter operations as well.

Talking with locals, their first question is, “were you here on Thursday?” followed by “well, you should have seen it on Thursday!” when the whole side of the mountain appeared to be on fire. The fire had significant impact on CN rail operations, with the closure of their main line, which sees upwards of 30 trains a day. Homes immediately adjacent to the fire area are on the Lytton First Nations reserve, some of which is still under an evacuation order while residents still in their homes are under an evacuation advisory, meaning they should be ready to evacuate immediately if the situation changes. One subject of conversation from both local residents and fire officials speaks to the changes in weather patterns – “this is only June, we usually don’t expect to see it like this around here until August.” Which makes you wonder what August will look like.