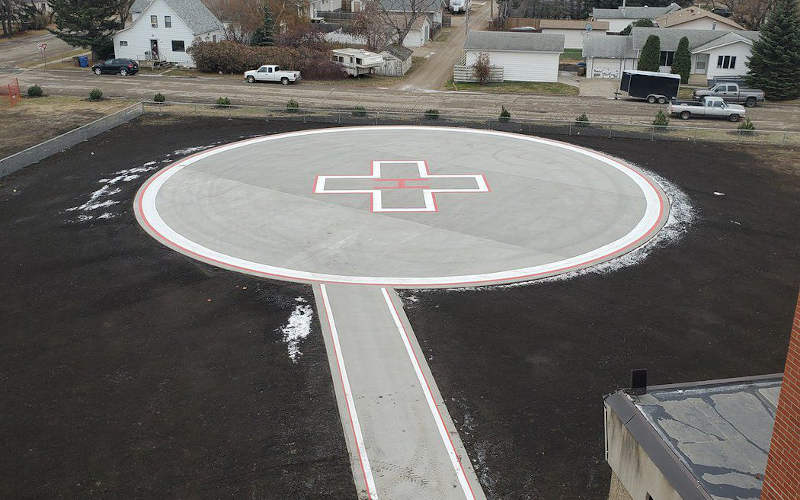 The Heliport at Melfort Hospital in Saskatchewan, which will primarily cater to STARS Air Ambulance aircraft, has been certified by Transport Canada. (Photo: Submitted, The Battlefords Regional News-Optimist)

With Transport Canada finishing off their inspection at the end of November, the helipad at the Melfort Hospital in Melfort, Saskatchewan, is now open to receive STARS Air Ambulance right to the hospital.

Brent Lutz, Melfort’s director of development, planning and community relations, said they are pleased to have the project completed. When they first started discussing the possibility of a helipad in Melfort, it was a rather daunting project, he said, especially the past nine months with COVID-19.

While there are still some final costs coming in for engineering work and consulting fees, the construction alone was going to cost around $600,000. With the collection of over $750,000 in donations to the project, Lutz said they are confident that the total cost of the project will be covered with no unexpected expenditures coming in.

“A sizable amount of money that will be able to be transferred to the North Central Health Care Foundation for other health-related causes.”

While the plans for a celebratory barbeque or pancake breakfast has been put on hold due to COVID restrictions, Lutz said they will be acknowledging donors on social media and with a donor wall which will hopefully be placed in the link between the Melfort Hospital and the Wellness Centre.

The contributions and cooperation of people throughout the Melfort district, both in the City of Melfort, neighbouring communities, and the rural area has made this project completion possible, Lutz said.

City staff, council and members of the fundraising committee were on hand on July 29 to break ground on the project with construction starting shortly after. This was the first time constructing a helipad for contractors, Contech Construction out of Saskatoon, and Lutz said there were few surprises and the finished project has certainly met their expectations.