Rotary-Wing Renewal in the Canadian Forces 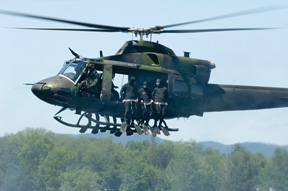 The past several years have brought significant – even fundamental – organizational change and operational enhancement to the Canadian Forces in a process that still has years to run. Prominent among the areas of CF transformation is the Air Force’s rotary-wing fleet, which is in the midst of an exciting and far-reaching expansion of its capabilities.
Here’s a fleet-by-fleet rundown on what’s happening in the world of helicopters that carry the maple leaf roundel:

CH-124 Sea King
While much has been written about the age and related mechanical/ serviceability deficiencies of this venerable aircraft (Canada’s Sea Kings were acquired between 1963 and 1969), outstanding maintenance standards have succeeded in keeping these aircraft mission-capable far beyond what was originally envisioned. Nevertheless, they are at last soon to be replaced by the CH-148 Cyclone (described separately).

There are 27 Sea Kings still in CF service, of which 22 CH-124As retain the traditional equipment for all-round maritime helicopter duties, including shipboard or land-based antisubmarine warfare (ASW) operations. In November-December 2006, however, the five CH-124B aircraft were converted to support the Integrated Tactical Effects Experiment – a project to investigate creation of a heliborne troop lift capacity from amphibious assault vessels into a beachhead or beyond. This involved removal of the passive acoustic suite, and installation of an increased number of troop seats, a multiband radio, and various other supporting modifications. A combat troop lift capability will be a feature of the new Cyclone.

The Sea King carries a four-person crew (two pilots, one navigator/tactical co-ordinator, one airborne electronic sensor operator), and is powered by a pair of 1,500-hp General Electric turbofan engines. These give it a cruising speed – depending on mission profile –  of 90 to 120 knots (167 to 222 km/h), a maximum speed 151 knots (280 km/h), and a maximum range (without auxiliary fuel tanks) of 300 nautical miles (556 km). The standard weapon for the Sea King is the Mk 46/Mod V antisubmarine homing torpedo, and search systems include a forward-looking infrared (FLIR) module, a passive/active sonar and surface-search radar.

As the relatively black-and-white realities of the Cold War have evolved to more diverse security threats, so too have the applications of the hard-working CH-124. Canada’s Sea Kings have participated in many ‘pointy-end’ operational missions in recent years. The CH-124 has done everything from monitoring suspicious small vessels, aiding boarding parties on large freighters and tankers and doing visual searches for mines in the Persian Gulf during Operation Friction (1990-91) before and during the Gulf War to overland reconnaissance during Operation Deliverance in Somalia (1992-93). During one such nighttime mission on Feb. 21, 1993, a Sea King came under small-arms fire from Somali clan gunmen over the beach at Kismayu. It also conducted surface surveillance and fleet-logistics duties in both the Adriatic Sea during UN/NATO peacekeeping operations related to the former Yugoslavia (Operation Sharp Guard, 1993-96) and in the Persian Gulf and Gulf of Oman as part of Canada’s maritime commitment to the campaign against terrorism (Operation Altair, 2001 to February 2007). Domestically, CH-124s are periodically called upon to help with search and rescue, disaster recovery, counter-narcotics, fisheries/pollution patrols and other operations.
As the CH-148 Cyclone enters service, the CH-124 will be phased out. It’s estimated that this will occur in 2010-2012.

CH-148 Cyclone
Intended to fly farther, faster and with more payload than the CH-124 Sea King it will replace, the Cyclone is a military maritime version of the Sikorsky S-92 civilian medium-lift transport/utility helicopter. In November 2004 the Government of Canada signed two contracts with Sikorsky: one valued at $1.8 billion for 28 aircraft, and a second worth $3.2 billion for 20 years of maintenance and logistical support, and a simulation and training package. The first aircraft is scheduled for delivery to the Air Force at Shearwater, NS in early January 2009 with the rest of the order following at a one-per-month rate.

The basic specifications for the Cyclone, in the government’s State-ment of Operational Requirement, included an all-weather, day/ night mission capability; flight endurance of 2 hours 50 minutes plus 30 minutes reserve; a cruise speed of more than120 knots; flight capability in light to moderate icing conditions; service ceiling of at least 10,000 feet; accommodation for a crew of four plus a modern suite of avionics and weapons systems to include sonar, radar, antisubmarine torpedoes and a machine gun. The aircraft also had to be capable of accommodating a six-person ship-boarding team, or one stretcher plus two attendants.

As noted in the Sea King section, the definition of a ‘maritime helicopter’ function is being expanded from the traditional ASW and maritime patrol (i.e., surface-ship surveillance) roles to include a significant troop-carrying capability to transport infantry (or cargo) from an amphibious-assault or similar auxiliary vessel into a beachhead. In support of this, the Cyclone’s ASW suite in the main fuselage can be relatively quickly removed and troop seating installed for the airlift mission.
CH-149 Cormorant Originally intended to be the search-and-rescue (SAR) component of a larger purchase of the British/Italian-designed EH-101 medium-lift utility helicopter back in the early 1990s, which would have also included a Sea King replacement for maritime-helicopter duties, the Cormorant is the result of a later severing of those two requirements and the reissuance of separate Statements of Operational Requirement. The CH-149 is essentially the same aircraft as the original EH-101 SAR version, and was selected in 1998 as the replacement for the long-serving twin-rotor CH-113 Labrador, when a $790-million contract for 15 SAR-configured aircraft plus certain in-service support was approved.

The Cormorants were delivered between October 2001 and July 2003, and the Labrador was officially retired in June 2004. A large and powerful aircraft powered by three GE T700-T6A1 turbine engines, the CH-149 has a maximum takeoff weight of 14,600 kg (32,187 lbs), a cruise speed of 152 knots (278 km/h), and a range of 1,018 km (633 miles). Special systems allow auto-hover, flight into light icing, and operations in higher winds than the Cormorant’s predecessor could handle. The standard crew consists of two pilots, one flight engineer, and two (or more) SAR technicians. Up to 12 casualties on litters can also be accommodated.

Currently handling about 600 SAR taskings each year, the Cormorant fleet has logged more than 25,000 hours on training and operational flights. In December 2002, a Gander-based CH-149 flew a 1,600-km round-trip rescue mission to retrieve an injured crew member aboard a Norwegian bulk carrier in the North Atlantic. The mission involved refueling twice from a Hibernia oil rig. As with any new aircraft, teething problems have cropped up. The most significant of these has involved cracks in the tail-rotor hub, and more frequent inspections have been mandated while a permanent fix is being developed.

In July 2006, the first serious Cormorant accident occurred when a CH-149 participating with a Canadian Coast Guard Auxiliary vessel in a routine nighttime training exercise off the East Coast crashed alongside, and three of the aircraft’s crew members lost their lives. The cause of the tragic incident is still under investigation.

CH-146 Griffon
Budget constraints of the mid-1990s resulted in the decision to retire four CF helicopter fleets – the single Huey and Twin Huey utility tactical transport helicopters (UTTH), the Kiowa light observation helicopter, and the Chinook medium- to heavy-lift helicopter – and replace them with a single, versatile, light  UTTH helicopter capable of supporting a majority of the roles and missions required by the CF. The CH-146 Griffon is essentially a modified version of the Bell Helicopter 412EP civilian variant.

Between September 1995 and February 1998, 100 CH-146s were delivered. The key modifications made for CF requirements were installation of a defensive electronic warfare suite (DEWS) and instrument-panel lighting compatible with use of night vision goggles (NVGs). The Griffon’s roles were envisioned as specialized troop lift, slinging of cargo, command and liaison, reconnaissance/control of fire, aeromedical evacuation, and secondary search and rescue.
The CH-146 has a maximum takeoff weight of 5,398 kg (11,900 lbs), a maximum cruise speed of 140 knots (260 km/h), and a range of 656 km (408 miles).

Since entering service, the CH-146 has proven a valuable workhorse and been employed in a wide range of operations, including domestic disaster relief (1996 Saguenay floods, 1997 Manitoba floods, 1998 ice storm in Eastern Canada, etc.) and international deployments such as Bosnia, Kosovo, Haiti and Honduras.

CH-147 Chinook
This famed and widely employed Boeing-Vertol Chinook medium- to heavy-lift helicopter is expected to return to the CF after about a 19-year absence. Canada had purchased a fleet of eight C-model Chinooks back in the mid-1970s, and operated them until 1991, when budget pressures forced a re-think of Air Command’s core requirements.

Recent CF operations have highlighted the requirement for helicopter lift to provide tactical mobility to ground forces.  As a result, the Medium- to Heavy-Lift Helicopter (MHLH) Project was established in July 2005 with the objective of acquiring a helicopter capable of safely and effectively moving CF troops and equipment in a threat environment, to support domestic and international operations.  The High Level Mandatory Capabilities identified the internal and external lift as well as the range, environmental performance requirements for the MHLH and included the capacity to lift 30 fully equipped combat troops or a lightweight field howitzer and its equipment over a minimum distance of 100 km at an altitude of 4,000 feet above sea level at an ambient temperature of 35 degrees C (95 degrees F).

The analysis of options available concluded that Boeing’s CH-47 Chinook was the only helicopter available from industry that satisfied all of the mandatory capabilities.  As a result an Advance Contract Award Notice was posted in July 2006 advising industry of the government’s intent to procure the Boeing CH-47 Chinook as the CF MHLH.  As specified, the Chinook will provide a robust expeditionary capability that will be a key element of CF transformation.  It is anticipated that the Chinooks delivered under the MHLH project will be based on the current CH-47 F-model, with some modifications to accommodate existing technical capabilities to account for specific Canadian requirements.

Balanced Force Structure
The CF has begun a long-term transformation process to ensure the continued provision of relevant and effective operational capabilities.  In part this process has begun with the planned acquisition of new capabilities, such as the Chinook helicopter. It will also include analyses and reviews of tactical aviation capability. The goal is a balanced force structure capable of functioning effectively in the CF’s operational environments.

In summary
The Canadian Forces has a long history of active and innovative employment of helicopters that dates back to 1947. Not-withstanding all that has gone before, the surge of new acquisitions detailed in this article indicates that, indeed, the best may be yet to come.