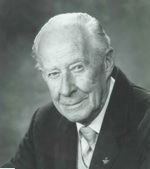 
Hugh Thomas was born May 24, 1903 in Sunset, Colorado. (5 months before the Wright Brothers flight). In 1909 the family moved to Ottawa and in 1911 moved to Vancouver. Hugh’s first encounter with airplanes, which affected his whole life, was the forced landing of the Hoffer Brothers’ seaplane in 1912. He towed the aircraft with his punt to the beach in front of his house. Hugh attended King Edward Technical School in Vancouver. In 1919 he moved to Wichita Falls, Texas where he made his first Solo flight in a JN 4 D Jenny.

In 1921 Hugh designed and built a prototype for an air-cooled, eight cylinder, radial engine. The Engine was installed in a Kenner Byplane and it flew for over 160 hours. The engine was designed for anti-submarine work, which could fire a 75-mm cannon through the propeller shaft giving it ideal ballistics and was subsequently approved by the Secretary of the U.S. Navy. In 1922 he moved to Los Angeles where he operated a body shop and pursued his flying activities. At this time he took the Boeing School of Aeronautics Instrument Flying Course in a Boeing 40 B4 biplane. This was the first instrument course available to the industry anywhere.

Hugh moved back to Vancouver in 1934 to head up the maintenance division of T.C.A. (Air Canada) When T.C.A. moved their operations to Winnipeg a short time later, he became the Chief Engineer and Chief Instructor for Brisbane Aviation that was later taken over by Boeing.

During WWII Hugh went back to the U.S.A. working for Sperry Gyroscope. Here he obtained authority to overhaul their equipment. He returned to Canada in 1948 as Chief Engineer for B.C. Airlines and in 1951 moved to Sidney as Chief Engineer for the B.C. Government Air Services. He developed an overhaul facility for airframes, engines, propellers, radios, etc. and also modified several Beech 18s for aerial photography mapping and surveying aircraft.

When he retired in the 1970’s he really only ‘changed jobs’. After retirement Hugh personally rebuilt two wrecked aircraft and then his main activity was designing and building a four place canard type amphibian constructed of composite materials. In June of 1991, Mr. Thomas was granted a U.S. patent for a ‘Pitch Control Trimming System for Canard Type Aircraft’.

Awards – In 1988 Hugh received the Pacific AME Association ‘Robert Hope Pursuit of Excellence Award’ and in 1992 the ‘Romeo Vachon Award’ in recognition of an outstanding display of initiative, ingenuity and practical skills. Honorary Member of the Victoria Flying Club.

Mr. Thomas was active in aviation both as a pilot and engineer for over 70 years. Unfortunately
the AME Hall of Fame was not established in time for Hugh to see it.