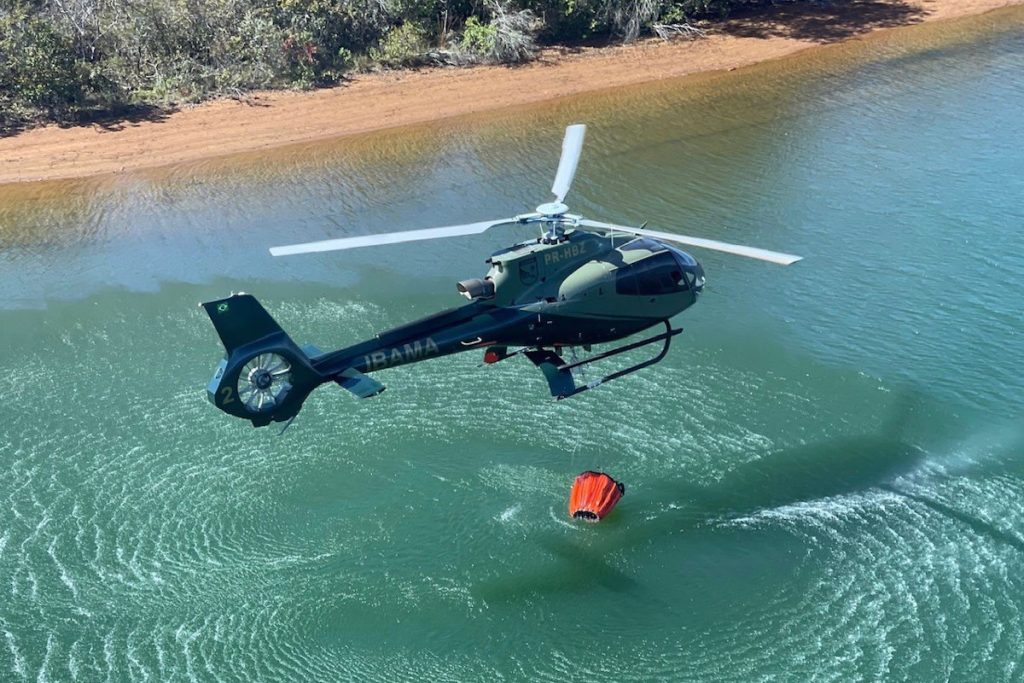 The Brazilian Institute of Environment and Renewable Natural Resources, or IBAMA, every year conducts an annual large-scale Forest Firefighting Training program held in Brazil’s capital city of Brasilia at the National Park. The program and includes both theoretical and practical elements.

This year’s IBAMA training program introduced SEI Industries’ Sling Dragon technology, which the Canadian company describes as an important device for the integrated management of controlled burns. The Sling Dragon went through extensive testing and received Technical Release in time to train IBAMA pilots with the new aerial ignition equipment. IBAMA’s three Sling Dragon units are the first to be used in South America.

SEI developed the Sling Dragon to increase safety and performance by removing the machine from inside the aircraft and slinging it from the helicopter cargo hook with a set of SS suspension cables. Safely operated by the pilot with a hand control switch, SEI explains the ignition occurs outside the aircraft and separate from the helicopter flight deck, eliminating the need of a crew operator.

With an increased capacity of 5,000 spheres and seven speed setting, the Sling Dragon is equipped with a GPS tracker that records the drops coordinates on a MicroSD card, allowing users to easily view a map of their burn area.

“The Sling Dragon will exponentially increase our prescribed burning capability, which is a fundamental element of IBAMA’s preventative program to reduce the severity of wildland fires – especially in large, protected areas such as indigenous and conservation lands,” said Everton Almada Pimentel, Environment Analyst – Aerial Operations, IBAMA.

Pimentel continues to explain that the addition of the Sling Dragon to IBAMA’s toolbox will bring more efficiency and safety to the aerial ignition operations allowing quick access to unreachable and risky areas for the ground crews.

The annual Forest Firefighting Training program is a weeklong event, repeated twice during the month of July), and coordinated by Prevfogo, Brazil’s National Center for the Prevention and Combat of Forest Fires, which is a division of IBAMA responsible for policy, prevention and fighting forest fires in Brazil. The program is also led by COAER, the Institute’s Air Operations Coordination.

“Every year IBAMA performs multiple operations in Brazil to fight and prevent forest fires. Due to the aircraft multi mission’s requirement the Bambi Bucket is the ideal firefighting tool,” said said Commander Robinson Bordin, Director of Operations, HELISUL. “It is flexible, light, and easy to install and remove from the helicopter, providing flexibility for the pilot to support other operations and quickly return to firefighting without shutting the engines down.”