Features EMS
Inside the Firehawk 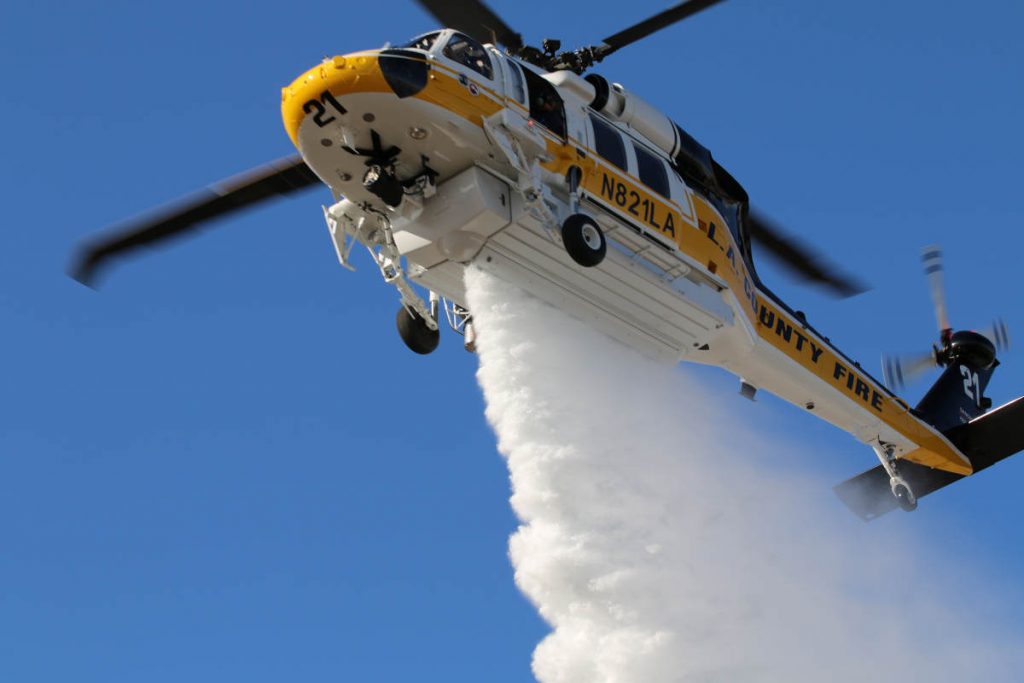 Three Sikorsky S-70A Firehawk helicopters operated by the Los Angeles County Fire Department virtually flew non-stop during the first 48 hours of the most-destructive wildfire in the county’s history – each operating for about 40 hours over those first two days, stopping only for maintenance and safety evaluations. Santa Ana winds, sustaining 50 mile per hour force, quickly fueled the Woolsey Fire into a 14-mile fire line and grounded all other aircraft for the majority of those critical first 48 hours.

Woolsey was one of several wildfires to ignite in California on November 8, 2018, including the Hill Fire, which was contained in eight days, and the devastating Camp Fire in Northern California, which killed 86 people, burnt 153,336 acres and destroyed 18,804 structures. The towns of Paradise and Concow each lost about 95 per cent of their structures in the Camp Fire, recorded as the deadliest and most destructive in California history.

After prompting the evacuation of more than 295,000 people, the Woolsey Fire killed three people, burned 96,949 acres and destroyed 1,643 structures. There is no discernible data to account for how the Firehawks suppressed the outbreak of the Woolsey fire, but few would argue their effectiveness in those early hours. Collectively, over the first seven days, the Firehawks accumulated a total of 120 flight hours and 350 water drops from their 1,000-gallon external water tanks. Born a UH-60 Black Hawk helicopter, the modified Sikorsky Firehawk leverages its proven military design to endure the unrelenting physical stresses demanded of initial attacks in aerial firefighting.

“With the military design of this aircraft, for that tactical mission in a variety of terrain and environments worldwide, an ability to do many things very well, the needs are almost exactly the same if you look at our mission. We’re just not in a combat environment,” says Mike Sagely, senior pilot, Air Operations, Los Angeles County Fire Department (LACoFD), who has been flying the Firehawk since 2009. Sagely began his military career in 1986 flying Black Hawks for the U.S. Army, including a few years with the 160th Special Operations Aviation Regiment. “The aircraft is designed to carry heavy loads, to be maintainable in the field, and it’s performance characteristics are very good across that environmental spectrum – in the systems design and on the safety side, which is for the soldiers and the pilots to survive.”

Sagely was one of the first pilots to get airborne and attack the Woolsey Fire at just after 3:00 pm, recalling how well the aircraft performed: “Even with 160th, which probably flies the heaviest of the Hawks, we never did 100 cycles of 23,500 pounds in a six- or seven-hour period… You might have done 10 or so, but never 100 cycles of max gross weight.” He points to the Firehawk’s unique external water tank – manufactured by Kawak Aviation Technologies and integrated by United Rotorcraft – as a critical component of LACoFD’s firefighting capabilities.

LACoFD has been flying the Firehawk S-70A since 2000 and in late-2019 received its first new-generation Firehawk S-70i – with a second machine scheduled to arrive in 2020. (The State of California’s Department of Forestry and Fire Protection will eventually fly 12 S-70i models. The City of San Diego Fire-Rescue also added an S-70i in late-2019). The S-70i brings more power, greater 4g maneuverability and lift when fully loaded, enhanced flight safety, new snorkel system, wide-chord rotor blades, four-axis flight controls, and an integrated digital cockpit. A true multi-mission aircraft, the S-70i can be reconfigured in flight for search and rescue, hoist rescues and medical transport, even with the water tank still attached. The unique Firehawk tank system required the aircraft to be elevated 20 inches to fit it under the belly with a retractable snorkel system, which allows pilots to maximize the speed of the platform.

“The VH on [the Firehawk] right now, configured, because we have all kinds of drag on this thing, is about 140 knots,” says Sagely, who notes the team will generally cruise to a scene at 130 to 135 knots. This speaks to the importance of Firehawk’s retractable snorkel when compared to an aircraft with a fixed snorkel that might be able to travel at a top speed of 80 to 90 knots. “Our world is about initial attack, getting water on the fire as rapidly as possible, buying precious time for resources to get there. That’s what the helicopter does best, especially when things are remote.” The Firehawk is rated to carry up to 11 firefighters and their gear. “If you can buy 10 or 15 minutes to get people on the ground you’ve done something. If the fire gets too big, you’re not going to stop it. Keeping it small is really the name of the game, tactically.” 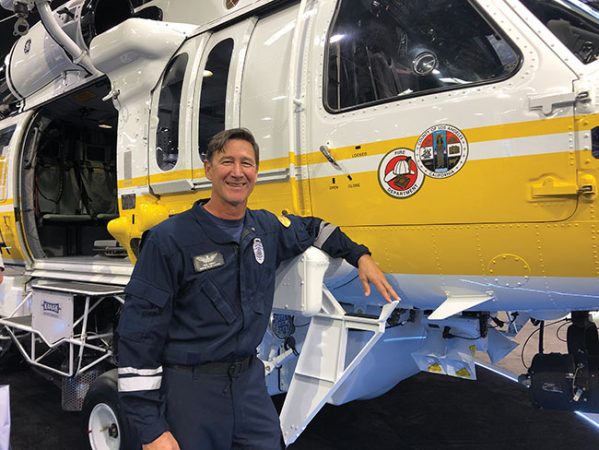 Mike Sagely has accumulated more than 10,000 flight hours and is qualified in over 30 aircraft.

A graduate of Embry-Riddle Aeronautical University, with a Bachelor of Science degree in Professional Aeronautics and a minor in Aviation Safety, Sagely spent the latter part of his military career (before retiring in 2007) in a unit focused on aviation R&D, where he flew both helicopters and airplanes. He has accumulated more 10,000 flight hours and is qualified in more than 30 different makes and models of aircraft – experience he leverages to assess the cost-benefit of aviation platforms.

Sagely describes key advantages of the Firehawk S-70i’s subtle V-shaped tank design with centre doors running the length of the system. Whereas most other systems feature side-by-side doors that open outward without control, the Firehawk’s actuated doors – holding back as much as 8,000 pounds – allow the water or retardant to accelerate out of the system with incredible accuracy; and operators can release specific gallons per foot as needed.

“It allows you to vary the effectiveness of your drop with speed and altitude to a point; and then you can use the door settings based on the [wildfire] fuel that’s under you or based on the length of the fire drop,” explains Sagely. “When you have it on max, we are literally digging a hole in the dirt because it comes out with so much velocity.” Sagely notes there is a lot of heavy brush in southern California and water needs to reach through the fuel to saturate the bed. “This tank is very special.”

Sagely explains the LACoFD Air Operations team made slight tweaks to the tank for the S-70i aircraft to improve maintenance and the ease of snorkel changes, as well as how water flows into the tank. “It flows faster, so we don’t have to sit there exposed over water,” he says. The team now has a display to show what water load is being taken on, greatly reducing the amount of manual calculations needed based on the environmentals of the mission. “It ensures we are within performance capabilities of the aircraft and within structural limits, because if you’re hovering in 13 knots of wind taking on water, you can overload the helicopter. It allows us to shift what that weight is going to be, so you can do it safely.”

Sagely explains these advances help alleviate pressures of working a fire, when there is a tendency to load as much water as you can, as fast as you can. Advances of the S-70i allow for better performance planning, which adds even greater value to the multi-mission Firehawk platform in constant use by LACoFD. With a price tag of anywhere from US$19 million to US$22 million, depending on configuration, the Firehawk is a major financial commitment for public agencies that must balance benefit with the cost for their taxpayers.

“Yes – it is a big investment and a hard pill to swallow for taxpayers… For the money of a helicopter, they could buy 50 or 60 engines, open stations, any number of investments, but the impact of the Firehawk is amazing,” says Sagely. “The reliability and quality of this machine is really, really special – its manufacturing process, how easy it is to work on for the most part, to maintain, its safety systems, the stability systems. If you were to ride with me in this helicopter and I’m on the run with this thing, you would be blown away with how fast I can decelerate, how fast I can accelerate and how well I can climb up the side of the mountain with a massive load – things that most people never have a chance to understand about a helicopter.”