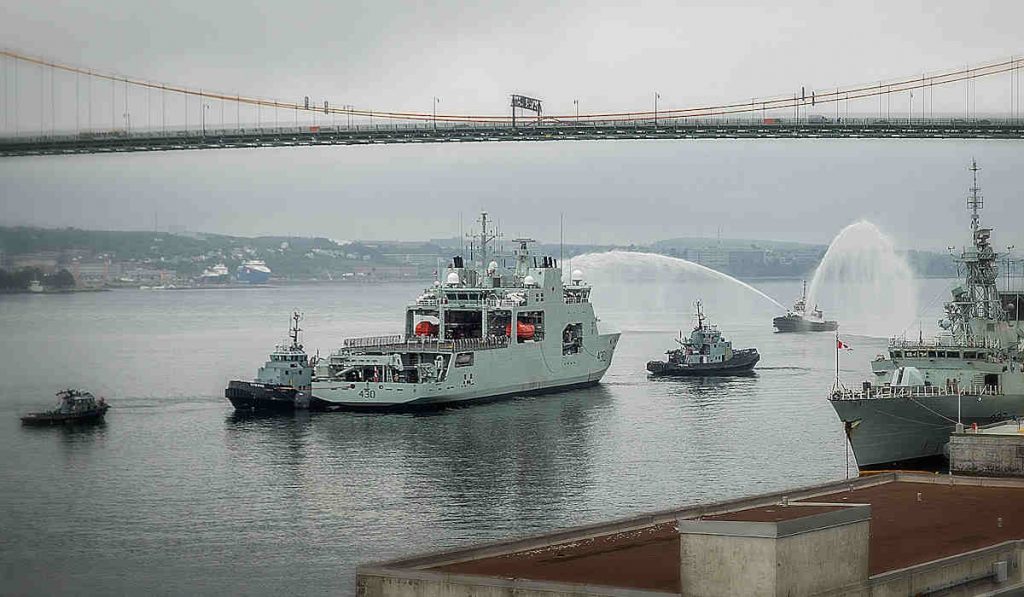 Irving Shipbuilding Inc. at the CFB Halifax Dockyard on July 31 officially delivered the HCMS Harry DeWolf, Hull Number 430 and the lead vessel in Canada’s new Arctic and Offshore Patrol Vessel class, to Canada and the Royal Canadian Navy. The new vessel holds the ability to operate and hangar a CH-148 Cyclone or small utility helicopter.

Irving Shipbuilding explains HMCS Harry DeWolf was built by Canadian shipbuilders in what it describes as the most modern and largest indoor shipbuilding facility in North America.

“This is a historic day for our 2,000 shipbuilders and Halifax Shipyard, as we successfully delivered the first-in-class HMCS Harry DeWolf, the lead vessel in Canada’s next-generation fleet,” said Kevin McCoy, president, Irving Shipbuilding. “This brand-new class of Arctic and Offshore Patrol Vessels is the most modern in Canadian history and will provide decades of outstanding service for the men and women of the Royal Canadian Navy.”

The vessel was moved on the morning of July 31 from Halifax Shipyard to the CFB Halifax Dockyard, where it will be based. An official Acceptance Ceremony was held on the Dockyard NJ Jetty, where ownership of the vessel was signed over to Canada and the Royal Canadian Navy. Irving explains on the instruction of Vice Admiral Art MacDonald, who signed the acceptance on behalf of Canada, the ship’s company then marched on board to assume command of the vessel. The formal Commissioning Ceremony for HMCS Harry DeWolf is scheduled to take place in 2021.

The HMCS Harry DeWolf is the first of six Arctic and Offshore Patrol Vessels for the Royal Canadian Navy, with the next three already under construction: the future HMCS Margaret Brooke was launched in November 2019 and continues construction in the water at Halifax Shipyard; the future HMCS Max Bernays is in the Assembly Hall at Halifax Shipyard preparing for a move to land later this year, and the future HMCS William Hall entered the Assembly Hall last November and will soon have the keel laying. First steel on the fifth Arctic and Offshore Patrol Vessel will be cut in the coming months.

HMCS Harry DeWolf was launched on September 8, 2018, completed successful Builder’s Trials at sea in November 2019, and then completed a series of Sea Trials (also known as Acceptance Trials) earlier in July, followed by crew training for the members of the Royal Canadian Navy.

“Congratulations to the world-class shipbuilders at Halifax Shipyard on delivering HMCS Harry DeWolf to the Royal Canadian Navy,” said Stephen MacNeil, Premier of Nova Scotia. “This milestone adds to the long, proud history of shipbuilding in Nova Scotia. The industry is an important part of our provincial economy, and I look forward to more success in the future.”