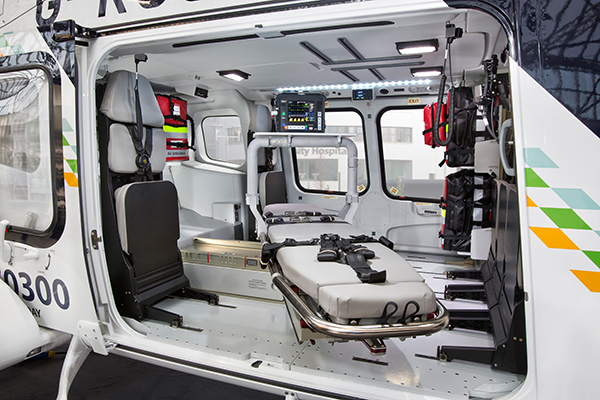 In a modern and effective system of urgent response and medical emergency, helicopter intervention is, in fact, all the more effective as it allows the doctor to reach the patient with all the necessary equipment before the situation deteriorates irreversibly.

Today, Emergency Medical Services (EMS) helicopters are true “flying hospitals”. Their crews can start medical treatment on patients with the equipment on board, stabilize medical conditions in flight and send clinical parameters in real-time via datalink to the most suitable destination hospital, which may not necessarily be the closest. This way the awaiting ground medical team will have all the information to act immediately after landing, saving time and ensuring patients a better chance of survival or avoiding permanent damage.

Over the years we have moved towards ever-larger helicopter platforms to meet the needs of doctors and patients. The capabilities of the helicopter have also changed: It must be able to fly and perform missions in all weather conditions, in any environment, over the sea or in high mountains, seven days a week, 24 hours a day. These developments include changing requirements for medical cabin interiors due to the global trend towards increasing weight and height of the population. In addition the technological advances that are impacting our daily lives have also changed everything that revolves around assistance in emergencies and, consequently, on board EMS helicopters.

Leonardo’s competitive position in this sector is due to helicopters capable of both responding to today’s needs and anticipating future requirements, designed in the knowledge that medical systems and rescue missions are constantly evolving. Leonardo helicopter cabins are very regular in profile, with plenty of room for medical equipment. Good examples are the AW139 and the AW169, which feature large and regular cabins where the patient is placed at the centre, allowing doctors and paramedics 360-degree access and the possibility of using all available space for the patient’s care and the housing of medical storage and equipment.

The cabin design also allows for greater and more rapid reconfigurability, with setups which can be quickly changed according to mission and which, above all, can be equipped with the latest medical devices. For example, it is possible to install extracorporeal membrane oxygenation (ECMO) technology, required in some patients with severe heart or respiratory failure, or the aortic counterpulsor or intra-aortic balloon pump (IABP) which allows the heart to pump more blood and oxygen to the body’s tissues.

The transport and rescue of newborns is also facilitated by the possibility of installing on-board neonatal incubators. Work is even underway to develop, for the not-too-distant future, a portable CT scanner that can be used to give a more complete clinical picture of the patient before arrival at hospital. Leonardo helicopters have also recently contributed to the biocontainment transport of patients affected by Covid-19, exploiting the aircraft’s designed-in ability to transport patients suffering from contagious diseases.

The cabins were designed by Leonardo with the help of professionals working on board helicopters. For example, Soccorso Alpino, which supports mountain rescue missions by checking ground conditions before landing; the Association of Italian Hospital Resuscitators Association – Critical Area Emergency (AAROI-EmAC), which by law provides at least one doctor, preferably an anaesthetist-intensive care specialist, for critical situations; the Italian Society of Anaesthesia, Analgesia and Intensive Care (SIAARTI), which is engaged in medical activity as well as in the validation of procedures and definition of guidelines for ground and helicopter rescue activity; and, finally, the Italian Red Cross, which provides doctors and nurses for rescue missions and which, at its headquarters in Bologna, hosts the cabin of a Leonardo helicopter for use in the training of doctors and flight crew.

Training is key to helicopter rescue activities. Leonardo invests a lot in Crew Resource Management (CRM) to support integration between all crew members. At the Sesto Calende site, Leonardo is developing a simulator to train all personnel engaged in missions: doctors, crew and pilots. It’s called the Helicopter Rescue Operations Simulator (HeROS), occupies an entire hangar and is divided into three sections. The first part is on the ground: The cabin of a helicopter equipped with EMS equipment for familiarisation exercises and interaction between doctors, pilots, and coordination activities required during actual in-flight operations. The central part is a cabin suspended on a crane, for the safe simulation of flight activities. Finally, a wall system simulates winch recovery missions on a rocky mountainside.

Last but not least, the AW109 Trekker deserves a separate mention. Its EMS interior was recently certified by both the Federal Aviation Administration (FAA) and European Aviation Safety Agency (EASA). Many of the activities described so far can also be carried out on board this helicopter, despite its relatively small size. The Trekker is mainly used in markets where the need for larger helicopters is not as strong, such as the United States, where the priority is “scoop and run”, that is: on-site patient recovery and transport to the nearest hospital. The Trekker cabin, however, also gives medical personnel complete access to the patient, allowing them to perform procedures such as ECMO, IABP or cardiac massage, unlike other helicopters of the same class which have less spacious cabin configurations.