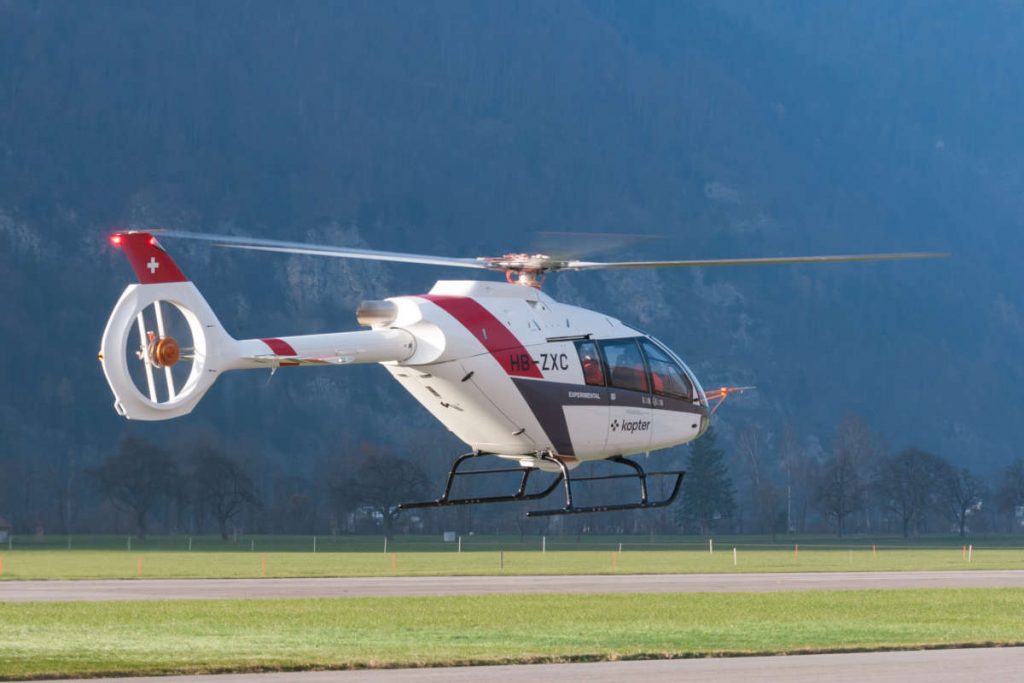 Kopter launched its new single-engine SH09 helicopter program in 2017 and by December 2019 was flying a third protoype of the aircraft in what the Swiss company described as its final design. (Photo: Kopter Group)

Leonardo today at Heli-Expo in Anaheim, California, announced it has reached a deal with Lynwood (Schweiz) AG to acquire 100 per cent of Kopter Group AG for US$185 million ($243.8 million in Canadian funds). Established in 2009 as Marenco Swiss Helicopter, the Swiss helicopter manufacturer in 2018 was rebranded as Kopter Group AG in 2018, removing its name association with founder Martin Stucki – principle of Martin Engineering and Consulting – who started the venture in 2007 in his family’s farmhouse.

“With this acquisition we will bring on board innovative skills and technologies that will complement our own and will also contribute to keeping us at the forefront of innovation and competitiveness whilst maintaining our financial solidity,” said Alessandro Profumo, CEO, Leonardo.

Kopter in 2017 launched its new single-engine SH09 helicopter program, which made its first flight on November 22, 2018, from the company’s primary facility in Mollis, Switzerland. In December 2019, Kopter announced, as it was flying with the third SH09 prototype in Pozzallo, Sicily, it was freezing the design of the SH09, which would flow into the Pre-Series 4 (PS4) aircraft scheduled for assembly by mid-2020.

“Lynwood is very proud to have strongly supported the development of Kopter and its SH09 program over the past 10 years,” said Marina Groenberg, CEO of Lynwood. “It is now the right time for Leonardo to take over as they are a perfect match for Kopter at this stage of development.”

In announcing its acquisition of Kopter at Heli-Expo, Leonardo described the single-engine SH09 as a perfect fit its product range and offers opportunities for future technological developments – pointing to hybrid/electrical propulsion solutions. Leonardo states the acquisition will replace its planned investment aimed at developing a new single-engine helicopter. Within the Helicopter Division of Leonardo, Kopter is to operate as an autonomous legal entity and competence centre.

Leonardo explains the purchase price, on a cash and debt free basis, consists of the US$185 million fixed component, plus an earn-out mechanism linked to certain milestones over the life of the program, starting from 2022. The closing of the transaction is expected to take place during the first quarter of 2020.

In March 2019, Kopter Group on March 9 marked its full-scale entry into North America with a ribbon-cutting ceremony at its new 84,700-square-foot facility at Lafayette Airport in Louisiana. In July 2018, the Swiss company had formed a U.S. subsidiary, Kopter North America LLC, to be led by Christian Gras.

At the time, Kopter expected the Lafayette facility to create 120 jobs by 2025 for the annual production of around 100 aircraft, targeting assembly of its SH09 helicopters. The company is leasing the facility from Lafayette Airport Commission, which owns the helicopter assembly buildings. The State of Louisiana initially funded construction of the US$25.3 million Lafayette facility on a 14.7-acre airport site.