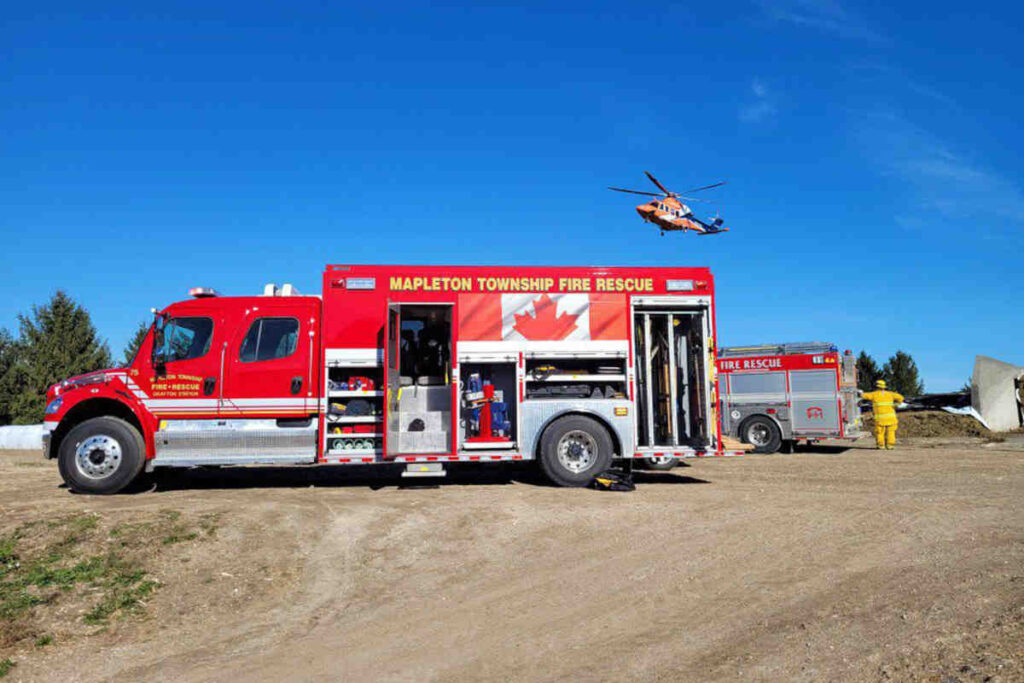 MAPLETON — Mapleton Fire and Rescue is receiving praise for how it handled a situation earlier this month that saw a man lose his legs in a farm accident.

Wade Durham, head of the Ornge air ambulance service that was also involved, sent a letter to fire chief Rick Richardson for helping save the man’s life that day.

“I am writing on behalf of Ornge … to express our appreciation for your efforts and collaboration on a complex and challenging transport of a trauma patient earlier this week,” wrote Durham.

“It soon became clear, based on the experience of our Operations Control Centre and our crew’s experience in the field, that each of the multiple agencies involved were dedicated to providing whatever assistance was necessary,” Durham wrote.

“This included fire services performing a very difficult extrication of a patient trapped by the vehicle, paramedic services providing patient care, Ambulance Communication Officers coordinating the first responders, physicians who made themselves available to attend the scene and police services transporting them there,” Durham wrote.

The accident happened on Jan. 10 in a rural part of the township.

Richardson remembered what he saw of the accident.

“It was on a farm but it was ruled as an industrial accident,” he said.

“There is a process for removing products from different containers. They squeeze this product out and the person that was in the accident got up into a place where it kind of trapped his legs inside of it.

“And he ended up losing his legs. I’m not sure if they tried to reattach them or not. I didn’t go to the hospital of course. But that’s what Ornge landed for anyways,” Richardson said.

“He was talking to a fellow worker, the thing there the whole time, so he never did lose consciousness at all,” Richardson said.

“First responders had to get a plan to get the person out safely,” Richardson said.

Paramedics and Ornge provided the person with more blood on the scene. This kept the individual alive while the firefighters did their work.

“So we had to move a bunch of mechanical equipment and get some gates up and make sure everything was safe for them and us and everybody else,” Richardson said.

That was as much detail as he could provide publicly at this point, as the Ministry of Labour is investigating.

“So as far as, what he was doing, the place he was at, all that sort of stuff, we leave that to the Ministry of Labour to figure out the why or hows.

“We just did the mechanical thing to get him separated out from the bin and try to help transport him to the helicopter,” Richardson said.

Jesse Gault is the Local Journalism Initiative reporter for GuelphToday. LJI is a federally-funded program.