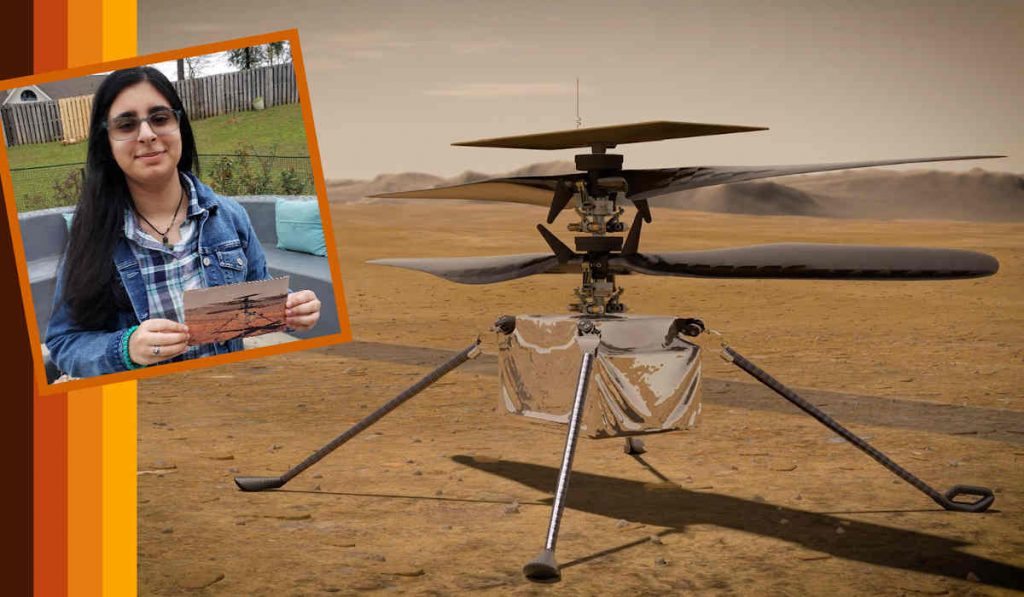 High-school student Vaneeza Rupani of Alabama is credited by NASA as providing the name Ingenuity for its Mars Helicopter (seen here as an artist’s impression) based on the U.S. space administration’s Name the Rover essay contest. (Photo: NASA/JPL-Caltech/NIA/Rupani Family)

The Mars Helicopter, which will be the first aircraft to attempt powered flight on another world, has been named Ingenuity by Vaneeza Rupani, a high-school junior from Alabama, who won an essay contest organized by NASA. The 4-pound Ingenuity test vehicle will be stowed in the belly of NASA’s Perseverance rover that is part of the Mars 2020 mission scheduled to launch in July 2020 – arriving at the Red Plant in February 2021 under the current timeline.

This timeline is an optimum – cost-saving – launch window based on the relative positions of Mars and Earth, which has driven NASA to stay on schedule despite the coronavirus pandemic.

“The ingenuity and brilliance of people working hard to overcome the challenges of interplanetary travel are what allow us all to experience the wonders of space exploration,” Rupani wrote in her contest submission. “Ingenuity is what allows people to accomplish amazing things, and it allows us to expand our horizons to the edges of the universe.”

NASA describes Ingenuity as a high-risk, high-reward technology demonstration, which will not impact the overall mission. If the helicopter does take flight, future Mars missions could enlist second-generation helicopters to add an aerial dimension to their explorations.

“Since our helicopter is designed as a flight test of experimental technology, it carries no science instruments. But if we prove powered flight on Mars can work, we look forward to the day when Mars helicopters can play an important role in future explorations of the Red Planet,” said JPL’s MiMi Aung, Ingenuity project manager. At the end of March 2020, NASA was completing final tests on Ingenuity before launch. 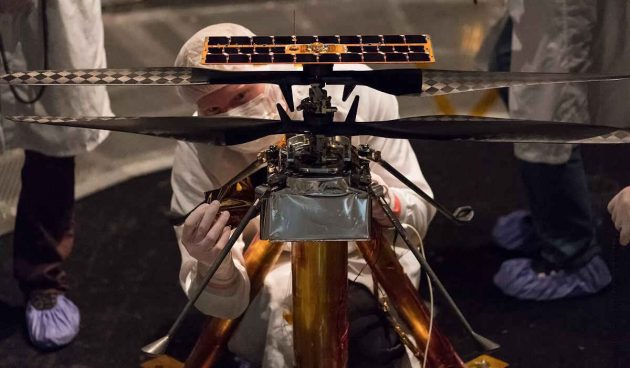 Ingenuity employs twin, counter-rotating blades rotating at almost 3,000 rpm, a rate that is about 10 times faster than a helicopter on Earth in order to bite into the Martian atmosphere. “Getting our helicopter into an extremely thin atmosphere is only part of the challenge,” said Teddy Tzanetos, test conductor for the Mars Helicopter, back in mid-2019. “To truly simulate flying on Mars we have to take away two-thirds of Earth’s gravity, because Mars’ gravity is that much weaker.”

To put the planned helicopter demonstration into perspective, NASA explains a helicopter on the Martian surface is already at the Earth equivalent of 30,480 metres in altitude – with the altitude record for a helicopter flying on Earth at about 12,192 metres. “NASA has a proud history of firsts,” said NASA administrator Jim Bridenstine, in August 2019 as engineers were testing the attachment of Ingenuity to Perseverance. “The idea of a helicopter flying the skies of another planet is thrilling. The Mars Helicopter holds much promise for our future science, discovery and exploration missions to Mars.”

Ingenuity will be deployed a few months after landing on Mars as the Perseverance rover finds a suitable location to place it on the ground. NASA explains the rover then will be driven away from the helicopter to a safe distance and begin to relay commands. Its batteries will then be charged, tests performed, and controllers on Earth will command the first flight on another planet.

NASA is planning for a 30-day flight test campaign with up to five flights of incrementally farther distances, up to a few hundred metres and durations as long as 90 seconds. On its first flight, NASA explains Ingenuity will make a vertical climb to about three metres, where it will hover for approximately 30 seconds.