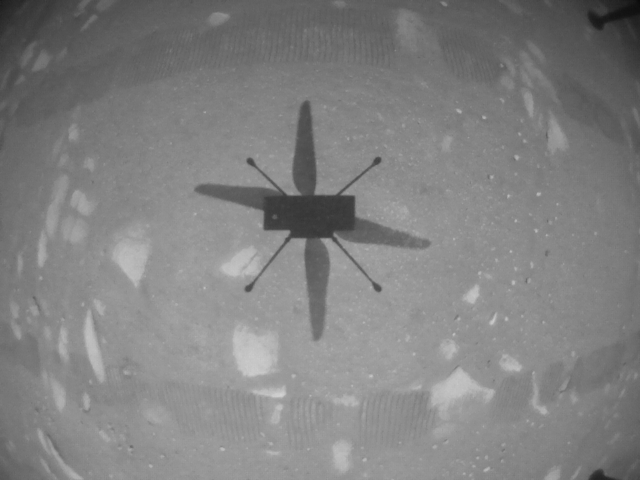 NASA’s Ingenuity Mars Helicopter captured this shot with its navigation camera as it hovered over the Martian surface on April 19, 2021, during the first instance of powered, controlled flight on another planet. (Image: NASA/JPL-Caltech)

NASA’s Ingenuity Mars Helicopter Team, primarily based at the Jet Propulsion Laboratory, has been named the recipient of the 2021 Robert J. Collier Trophy for the first powered, controlled flight of an aircraft on another planet – “Thereby opening the skies of Mars and other worlds for future scientific discovery and exploration.”

Since 1911, the Collier Trophy has been awarded annually by the National Aeronautic Association (NAA) to recognize what it sees as the greatest achievement in aeronautics or astronautics in America. Last year, Garmin Autoland was awarded the prize for what the company describes as the world’s first certified autonomous system designed to activate during an emergency to safely fly and land an aircraft without human intervention.

“While NASA’s Ingenuity Mars Helicopter team expanded the flight envelope by 100-million miles, we know we didn’t do it alone,” said Larry James, Interim-Director of NASA’s Jet Propulsion Laboratory in Southern California. “For it was the efforts and ingenuity of those women and men who developed and tested cutting-edge vehicles before us that helped make powered-controlled flight on another planet possible. That our Mars Helicopter name will now appear on this iconic trophy alongside so many of these air and space giants is an honor, and fuels us to continue exploring the skies over the Red Planet.” 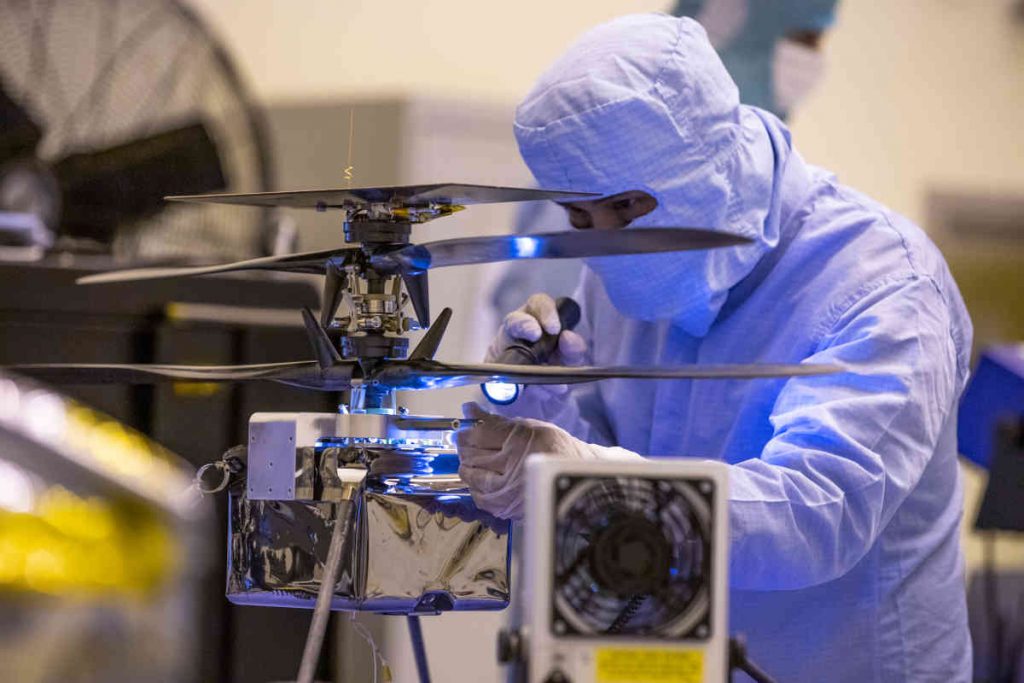 Ingenuity is inspected at the Kennedy Space Center in Florida for the final time before it is attached to the Perseverance rover in preparation for launch. (Photo: NASA/Cory Huston)

NAA notes 117 years after the Wright brothers succeeded in making the first powered flight on Earth, the Ingenuity Mars Helicopter performed this amazing feat on another world. On April 19, 2021, Ingenuity lifted off from the surface of Mars, climbed to the prescribed altitude of 10 feet, and maintained a stable hover for 30 seconds. It then descended, touching back down on the surface of Mars after logging a total of 39.1 seconds of flight, thereby becoming the first aircraft in history to make a powered-controlled flight on another planet.

Since its first flight, NAA explains Ingenuity has accomplished all of its technology demonstration goals and successfully transitioned into service as a science scout for the Perseverance rover, investigating promising science targets and safe routes of travel for its companion. NAA notes the helicopter’s colour camera has also been used to collect high-definition imagery to assist the science team in identification and assessment of intriguing, and in some cases previously unknown, geologic features.

To date, the mission’s official logbook has entries for 24 flights and a cumulative flight time of over 43 minutes, focused on the 45-kilometer-wide Jezero Crater on the western edge of Isidis Planitia, a large impact basin just north of the Martian equator.

Stands 22 inches tall, the 1.8-kilogram Ingenuity aircraft employs twin, counter-rotating blades running at almost 3,000 rpm, a rate that is about 10 times faster than a helicopter on Earth in order to bite into the Martian atmosphere, which about 100 times thinner than Earth’s. To put the high-risk mission into perspective, NASA explains the Martian surface is already at the Earth equivalent of 30,480 metres in altitude, with the altitude record for a helicopter flying on Earth reaching just over 12,192 metres.

“I recently travelled to Kitty Hawk, North Carolina, and was in awe to be able to stand where the Wrights achieved the first flight on our planet,” said Bob Balaram, Chief Engineer emeritus and innovator of the Mars helicopter design. “It is my hope that, some day, when people travel to Mars’ Jezero Crater that they consider visiting where the first flight on that world occurred.”

Ingenuity actually carried a small, precious swatch from the left wing of the first Wright Flyer with it into the Martian skies on every flight. “The challenges of autonomously flying a helicopter in the atmosphere of Mars cannot be overstated,” expressed NAA Chairman, Jim Albaugh. “This accomplishment truly warrants and has earned this year’s Collier Trophy.”

The Collier Trophy Selection Committee, comprised of 44 aviation and aerospace professionals, reviewed presentations from four nominees and selected the NASA/JPL Ingenuity Mars Helicopter Team as the recipient of the Collier Trophy on March 31, 2022.