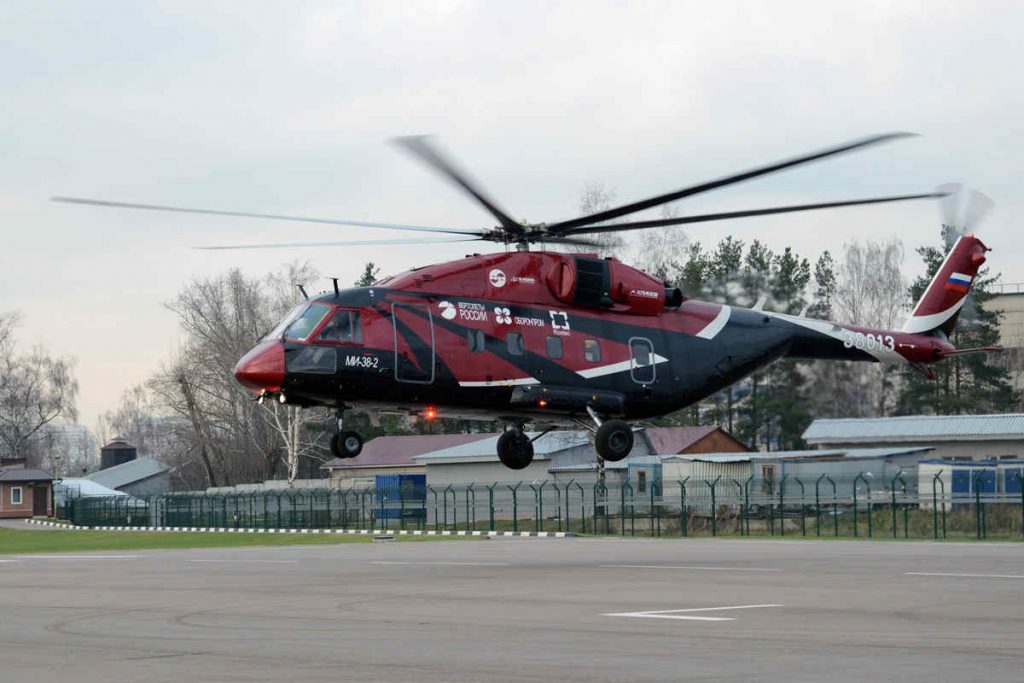 New test results confirm the Mi-38’s ability to fly in altitudes of up to 3,000 metres above sea level. (Photo: Russian Helicopters)

Russian Helicopters, part of Rostec, finished a series of Mi-38 flights conducted under the instrument flight rules (IFR), as well as in conditions of extremely high temperature and high altitude. Test results were delivered to the Federal Air Transport Agency Rosaviatsiya to make additions to the helicopter’s type certificate.

The helicopter made more than 50 flights in the city of Astrakhan, explains Russian Helicopters, confirming the possibility to operate at ambient temperatures of up to +45 degrees Celsius. High altitude tests were conducted at Mount Elbrus. The company states test results confirm the Mi-38’s ability to fly in altitudes of up to 3,000 metres above sea level. In addition, the helicopter made a series of 50 flights, during which the possibility of piloting and navigation was evaluated in the absence of visual visibility of landmarks and the horizon.

“Considering there’s high interest in the helicopter from both Russian and foreign customers, we’re trying to test and document the its capabilities to the maximum,” said Andrey Boginsky, director general of Russian Helicopters. “In particular, we are planning to test a new surveillance system and certify new hardened main rotor blades [to be used in Mi-171A2] in the near future.”

The Mi-38 is equipped with new Russian-made TV7-117V engines, an integrated digital flight-navigation system with data display on five LCD displays, and an protected explosion-proof fuel system. The helicopter also comes with additional supports for the landing gear for soft ground and snow landings.

Russian Helicopters explains Mi-38’s IBKO-38 integrated set of on-board equipment provides the crew with high-definition information necessary for ensuring a high level of flight safety. The helicopter cabin has seats which are easy to remove, removable sanitary facilities and rollers to transport cargo.

The company states the Mi-38 helicopter can be used for transporting cargo and passengers, search-and-rescue operations, and VIP transportation – operations that can be conducted in a range of climates, including maritime, tropical and cold environments.