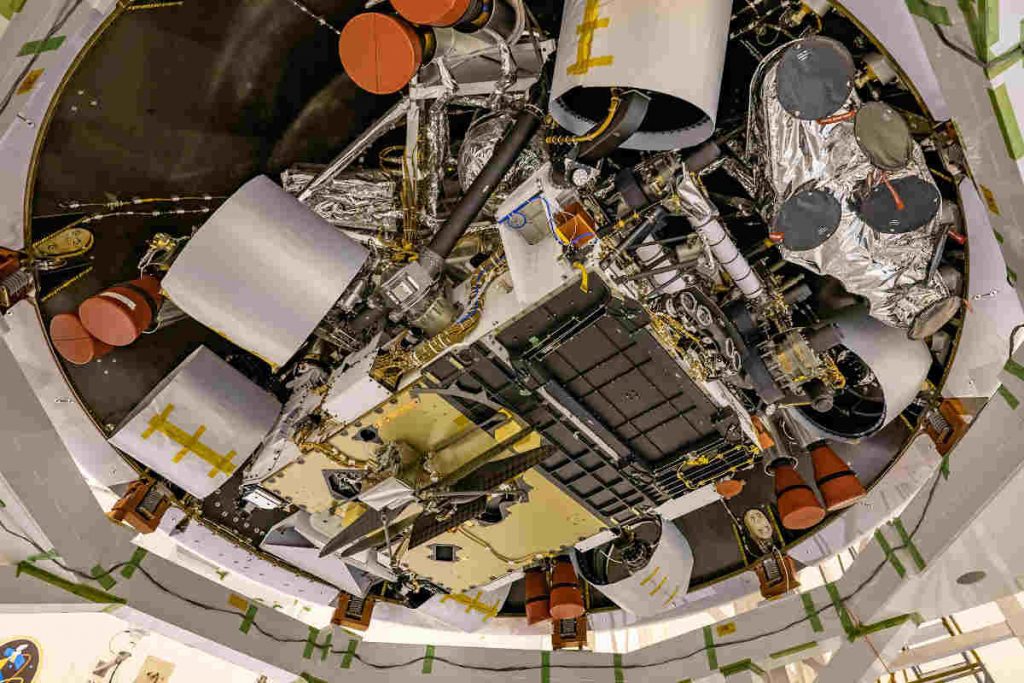 In this image taken on April 29, 2020, the descent stage of NASA’s Perseverance rover is stacked atop the rover, with both sections placed in the back shell for protection during the journey to Mars. Here, with underside of the rover visible, the Ingenuity helicopter – noticeable by its twin carbon-fibre blades against the gold background – is attached in the lower centre of the image. (Photo: NASA/JPL-Caltech)

NASA, at the end of business day on July 29, was still a go to launch one of its most-important scientific missions in years toward Mars, targeting a rocket lift-off for 7:50 am EST on July 30. A United Launch Alliance Atlas V is being prepared to launch the Mars 2020 Perseverance rover from Space Launch Complex 41 at Cape Canaveral Air Force Station in Florida.

The July 30 launch window is approximately two hours, with a launch opportunity every five minutes. It is an optimum – cost-saving – window based on the relative positions of Mars and Earth, which has driven NASA to stay on schedule despite the COVID-19 pandemic. Tucked away in the belly of Perseverance rests Ingenuity, a technology experiment originally known as the Mars Helicopter (before it was renamed by an Alabama high school student), which aims to become the first aircraft to achieve controlled flight on another planet.

Based on their July 30 launch timeline, Perseverance and Ingenuity are scheduled to arrive at the Red Plant’s Jezero Crater on February 18, 2021. After a weeks-long period of its own scientific study and reconnaissance, Perseverance will deploy Ingenuity onto the surface of Mars. Ingenuity is expected to attempt its first flight test in spring 2021.

Jezero Crater is a 45-kilometer-wide crater on the western edge of Isidis Planitia, a large impact basin just north of the Martian equator. NASA explains the crater was a possible oasis in its distant past with evidence suggesting a river there flowed into a body of water the size of Lake Tahoe, between three and four billion years ago. The Perseverance science team, according to NASA, believes this ancient river delta could have collected and preserved organic molecules and other potential signs of microbial life.

The 1.8-kilogram Ingenuity aircraft is described by NASA as a high-risk, high-reward technology demonstration, which will not impact the rover overall mission. It carries no scientific instruments, but, if Ingenuity does take flight, future Mars missions could enlist second-generation aircraft to add an aerial dimension to their explorations.

Ingenuity employs twin, counter-rotating blades running at almost 3,000 rpm, a rate that is about 10 times faster than a helicopter on Earth in order to bite into the Martian atmosphere, which about 100 times thinner than Earth’s. “Getting our helicopter into an extremely thin atmosphere is only part of the challenge,” said Teddy Tzanetos, test conductor for the Mars Helicopter, back in mid-2019.

To put the planned helicopter demonstration into perspective, NASA explains a helicopter on the Martian surface is already at the Earth equivalent of 30,480 metres in altitude – with the altitude record for a helicopter flying on Earth at about 12,192 metres. The Ingenuity team leveraged JPL’s Space Simulator, a 7.62-metre-wide vacuum chamber, for its flight testing. NASA explains the team created a vacuum to remove all of the nitrogen, oxygen and other gases from the air inside the Space Simulator’s cylinder and then injected carbon dioxide, the chief ingredient (about 95 per cent) of Mars’ atmosphere.

“NASA has a proud history of firsts,” said NASA administrator Jim Bridenstine, in August 2019 as engineers were testing the attachment of Ingenuity to Perseverance. “The idea of a helicopter flying the skies of another planet is thrilling. The Mars Helicopter holds much promise for our future science, discovery and exploration missions to Mars.”

After Perseverance finds a suitable location to place Ingenuity on the ground, NASA explains the rover then will be driven away from the helicopter to a safe distance and begin to relay commands. Its batteries will then be charged, tests performed, and controllers on Earth will command the first flight on another planet. The aircraft will need to survive and function in cold temperatures, including what NASA pegs as nights reaching as low as minus 90 degrees Celsius (minus 130 degrees Fahrenheit). Ingenuity contains a heating mechanism to keep it warm during the Martian nights, in addition solar cells that charge its lithium-ion batteries.

NASA is planning for a 30-day flight test campaign with up to five flights of incrementally farther distances, up to a few hundred metres and durations as long as 90 seconds. On its first flight, NASA explains Ingenuity will make a vertical climb to about three metres, where it will hover for approximately 30 seconds.