Hey Matt. What does it look like on your side? Can you see any fish down there?” 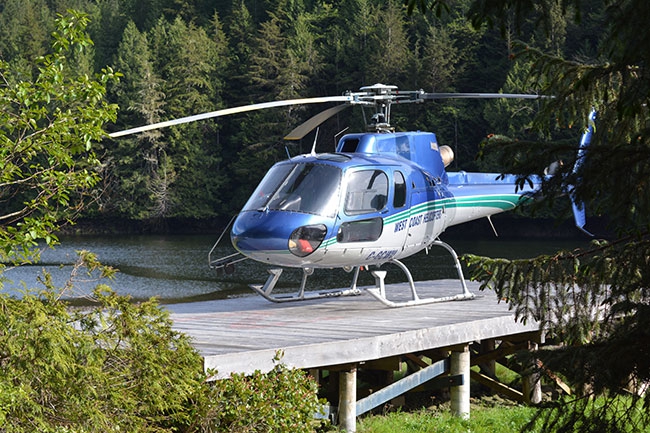 Nimmo Bay Resort remains a very important client for West Coast Helicopters. Hey Matt. What does it look like on your side?

I’m sitting in one of West Coast Helicopters’ immaculate Airbus Helicopters’ AS350 B2s and my good friend Peter Barratt, the enigmatic vice-president, accountable executive and co-owner of this creative B.C.-based operation is deftly meandering our machine through a narrow mountain canyon along one of the many rivers that dot the pristine landscape in the province’s Great Bear Rainforest on B.C.’s Pacific coast.

Barratt and I, two self-professed fishing fanatics, are scanning the river for this spring’s most sought-after prize – steelhead. It’s a little after ice out and the bigger fish may not be active in the rivers just yet, but we’re determined to give it a try just the same – it’s what real anglers do after all. Since meeting one of the industry’s most personable and successful operators, I am finally joining Barratt for a little fishing, relaxation and a glimpse of not only the West Coast base in Port McNeil, but one of his operation’s most prized clients – Nimmo Bay Wilderness Resort.

Heli-toursim is one of the most important and growing elements of West Coast’s business and Nimmo Bay is its prized jewel. Like many resourceful Canadian operators, West Coast continues to diversify operations to capitalize on the growing revenue opportunities in heli-tourism. The company now lists not only heli-fishing as a distinct vertical, but heli-skiing, and heli-hiking as tourism options.

With four bases on the B.C. coast, West Coast continues to be an active player in a variety of sectors including aerial delivery, construction, agriculture (seeding and fertilizing), fire suppression, crew movements, hydro support, medical transport and evacuation, aerial photography and more. With a mix of mostly AStars and Jet Rangers, the company boasts a diverse fleet that can handle a variety of tasks.

Nimmo Bay Wilderness Resort was founded by Craig and Deborah Murray in October 1980 and is still owned and operated by the family. The resort is one of the world’s first and most successful eco-lodges. Nestled in old growth forest and surrounded by waterfalls, secluded beaches, majestic trees, granite peaks and glaciers, it is an outdoor adventurers dream.

Nine tastefully-decorated two-bedroom chalets dot the premises and spa facilities, a hot tub and much more are available for guests. It’s just a short walk from the chalets to the main lodge, where hearty meals, the finest wines and culinary masterpieces tempt the taste buds of the most discerning visitor.

Fishing was the original calling card of the lodge and indeed world-class angling opportunities abound. With some 50 isolated lakes and rivers within a 50,000 sq. km. area of the lodge, anglers can test their skills for several species of salmon and trout. But there are other activities for guests. Kayaking, hiking, whale watching, ecotours and more make this truly a unique outdoor experience. And for the more adventurous visitor, unforgettable helicopter adventures touring the soaring mountain peaks and glaciers in this part of B.C. are simply spectacular. My mountain trek with Barratt after our fishing excursions was truly awe-inspiring. “That’s one of the reasons I haven’t retired,” Barratt said as we sat perched on a mountain top having lunch. “This is my backyard – and I get to share it. It’s all about people and it’s my job to help them have a great experience.”

Nimmo Bay Resort is in some very elite company. It is one of only two Canadian properties on National Geographic’s Unique Lodges of the World list and has been a favourite spot of many celebrities with plenty of star power. Actress Michelle Pfieffer and her husband David E. Kelly (an American writer and producer of Ally McBeal, Boston Public, Boston Legal and more) have been regular guests at the lodge, as have many former politicians and athletes. They’ve even had the Stanley Cup on site (also on top of a nearby mountain). And yes, Barratt has kissed the Cup.

“It’s a special place and it represents a unique and very important part of West Coast’s client base,” Barratt told Helicopters. “And now the property gets some pretty high rollers. Since Fraser has taken over (Craig and Deborah’s son), the lodge has taken on a high end feel. Consequently, revenues have started to climb.” Increased activity has also meant a bump in flying hours for West Coast.

When Opportunity Knocks . . .
One of the messages that surfaces quite frequently at Helicopter Association of Canada (HAC) conventions each year is the need for operators to recognize opportunities and be willing to craft their operations to take advantage of potentially lucrative situations. It was Barratt’s love of fishing, people and an entrepreneurial spirit – the ability take a chance and seize an opportunity – that spurred him on to help out with the development of the property in the early 1980s.

“At the beginning, Craig had a float there, a boat, he did some salt water fishing,” Barratt said. “I got to know him and he said, ‘can you bring that helicopter out and help me sling the cement up the hill because he was building this pipeline . . . I said no, it’s too much work, let’s go fishing,” he said laughing. Eventually, that job and many others were completed, but both men started looking around at what was there and what might be. “We concurred that we can market this.”

Market it they did – at fishing shows, tourism conferences and more. Soon, partners were added, more helicopters were bringing visitors to the property and much more activity was in the works. As Barratt accurately points out, at the core of the successful development of the project was a belief, commitment and vision that something substantial could be attained.

“It’s all about relationships in the helicopter business,” Barratt said. “And business relationships also start with respect. If you lose respect, you lose everything. So, you need to keep the relationship going. Stuff does come along . . . it just does. You have to learn to deal with it.

“Take Fraser at Nimmo Bay. If he gives us grief about a pilot, I say, ‘Fraser, you are absolutely right, I can see it from your point of view. What you don’t know is our point of view. Let me tell you about it.’ I say this to my customers all the time. Why in the world would I purposely go out of my way to piss you off? I understand you have a problem, I am here to fix it. So, we solve it and now we have a safe operating procedure, or safe work practices, or whatever happens
to be.”

A Little Slice of Heaven
In his excellent book Fling Wing , author Jack Schofield describes the development of Nimmo Bay Wilderness Resort, West Coast’s role in the process and the development of the commercial helicopter business on the left coast. Throughout Schofield’s excellent narrative, it becomes clearly apparent that a good deal of Nimmo’s success has been driven by the professionalism and vision of Barratt, co-owner Terry Eissfeldt, the company and the open dialogue that exists between client and operator. But it goes beyond that. It’s also about Barratt’s passion for the B.C. landscape, which has left an indelible mark on his soul, shaping the person he is today.

“On most days, you are busy flying, but if it’s a nice day, you can look around . . . and pause somewhat. This is my backyard,” Barratt said. “I’m not religious but in fact I think am. And sometimes, when I am flying by myself, I think, ‘thank you . . . thank you very much. You’ve got to say thanks whenever you can.’ ”