Operators of all sizes and fleet mixes are leaving no rotor unturned in their drive to maintain operations and preferably grow them in the face of a range of obstacles. 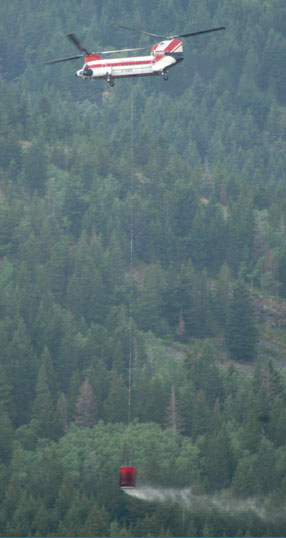 Operators of all sizes and fleet mixes are leaving no rotor unturned in
their drive to maintain operations and preferably grow them in the face
of a range of obstacles. Some have fared better than others over the
past year, but on the whole the industry is looking ahead with
characteristic optimism. About the only cloud on the horizon is the
lingering uncertainty about insurance; there is speculation that
premiums could drop from their last spike – but while several operators
have heard this, none are really taking that into account in
calculating their rates.

In
British Columbia, home to 80 of the country's more than 200 operators,
Aberdeen Helicopters Ltd. of Prince George is probably archetypal.
Company president Pete McGill and two other pilots keep a pair of Bell
206B JetRangers busy and he has no plans "at this point" to expand. He
apparently is happy to be doing a fairly conventional mix of work,
including a small amount of tourism flying – alpine hiking and the like
– in the interior mountains, and while he's hoping to expand that face
of Aberdeen, concedes that it's highly competitive.

As with many
operators, last summer's forest fires in south-central B.C. provided a
lot of work for Aberdeen. "We started off the summer fairly busy and
then it got quiet, but all of a sudden we were on the fires until
September." While the fires were a body blow to many sectors, they were
a boon to helicopter operators. "Everybody I talked to there said that
either they were going to sell a helicopter or more or they would've
been closing their doors if that hadn't happened," McGill said.

On
Vancouver Island, Campbell River-based E&B Helicopters Ltd., in
business for 14 years, has expanded its fleet with a Hughes 500D and,
more recently, a Bell 407. The company also is the B.C. dealer for
Robinson. "I can't complain," said Ed Wilcock, president and operations
manager, who flies "all over the place" as needed. "We're just getting
busier." Reflecting that, the company also has increased its number of
pilots to nine from six and its other staff proportionately, a mix of
full-time employees and contractors. The 500 will be used for forestry
work and the 407 generally will be tasked for fire suppression because
of its ability to carry heavier buckets. "But you can't count on
fires," Wilcock pointed out. "Most of our business is logging and
government work."

Some 1,300 kilometres to the northwest in
Whitehorse, Capital Helicopters (1995) Inc. also operates a pair of
Bell 206Bs. Company president Delmar Washington, who also multi-tasks
as chief pilot "and janitor and whatever else," leased out one aircraft
for much of last season. Business generally was "all right" last year
after a few "soft" ones and he said "this year seems to be shaping up a
little better." Servicing "a real broad range" of clients, although
"not too much tourism stuff,” Washington expects to be doing much the
same in 2004, flying equipment and personnel for mining companies,
doing big-game surveys in Yukon and whatever fire-suppression contracts
open up there and elsewhere.

While Black Hawk Helicopters Inc.
is headquartered in Vancouver, its main base of operations is
Whitecourt, Alberta. The company is co-owned by its founders,
operations manager Brian Bartel and chief pilot Mike Tams, who maintain
a pair of JetRangers and a Eurocopter AS-350, hiring other pilots as
necessary. Both worked for Western Aerial Applications Ltd. of
Chilliwack, B.C. "for a lot of years before deciding to do our own
thing about two years ago." About 80% of their niche-market forestry
herbicide spraying is for the private sector, the rest on Crown lands.