Hermès and Eurocopter: Landmark Design Partnership
Setting out to demonstrate that the helicopter can transcend its traditional role, Eurocopter and Hermès unveiled their experiment in collaborative engineering and design – ‘l’Hélicoptère par Hermès’ – at September’s NBAA conference in Atlanta.

The baseline for the Hermès and Eurocopter partnership was a reappraisal of the helicopter’s potential as a form of personal transportation. With a determination to address even the most challenging design issues, in-cluding a complete redesign of the helicopter’s landing gear, the culmination of the undertaking is a special edition of the EC 135 helicopter.

Hermès not only reviewed the internal fitting of the aircraft, but also worked on its exterior to create true cohesion between shapes and materials. Ever conscious of technical constraints, Gabriele Pezzini, a freelance designer regularly hired by the House of Hermès for special projects, worked closely with Hermès development, craftsmen teams and Eurocopter’s engineers to bring the concept to reality. Some 50 ‘hard’ aspects of the aircraft have been redefined.

Dubbed “Elegance in Motion,” ‘l’Hélicoptère par Hermès’ represents a new approach to the business aviation marketplace. Surfaces from floor to ceiling have been covered in ‘Toile H’, a signature Hermès canvas used to manufacture the firm’s travelware since the 1920s. Seats and banquette are handcrafted and upholstered in calf leathers, naturally grained and highly resistant.

Comments Eurocopter senior executive vice president, Philippe Harache: “Helicopters, given their flexibility, are a perfect complement to business jets. While growth in business aviation is robust – with promising upside potential in both the US and other key markets – it is a segment that also places an extremely high premium on quality of design. Given its knowledge, background and expertise in addressing such demanding audiences, the House of Hermès represented the indispensable partner required to bring the project to maturity.”

Adds François Taverne, chairman of Hermès Gainier: “This is a genuine collaboration in industrial design and one that is unusual given our respective areas of expertise. By working so closely together, and combining the talent of Eurocopter’s engineers with that of our designer, Gabriele Pezzini, and our skilled craftsmen, both companies have taken a major step forward in improving the experience of travel by helicopter.”

First deliveries are scheduled for 2008, with aircraft availability worldwide.

Precision owner John Carlton says: “This is a very user-friendly system that enhances cockpit management and keeps us moving forward with new developments in avionics.” Also, in response to customer requirements, Precision Helicopters has installed Latitude Technologies Skynode GPS tracking systems in all its helicopters. 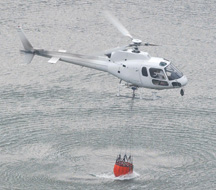 New Bambi Bucket for small/medium helicopters
SEI Industries Ltd. has announced the release of the BB2226, a 1,000 litre/264 USG Bambi Bucket designed specifically to provide an optimum balance between capacity and weight for the Eurocopter AS 350B3 Series and similar-sized small and medium helicopters.

The compact BB2226 complements the existing Bambi Bucket line, closing the gap between the 240-gallon BB2024 and the 324-gallon BB2732 Bambi Bucket. Like all Bambi Buckets, the BB2226 allows helicopter operators to access virtually any water source, and is stable and responsive in flight. The BB2226 can be enhanced with the Powerfill system to add rapid shallow-fill capability, and the Aqualanche Valve to enable variable dump capacity.

The contract has an estimated value of $10 million.The contract extension means Helijet will continue to operate two dedicated air medical helicopters for the province into September 2010. Both helicopters will continue to be based at Helijet’s hangar at Vancouver International Airport’s South Terminal and will be used primarily for critical-care patient transfers between communities and Greater Vancouver critical-care centres. The helicopters and their crew will be on call 24/7 year-round.

Every year, Helijet air ambulance pilots and BC Ambulance Service paramedics provide air medical transfers and critical care for approximately 600 adult and infant patients on Vancouver Island and in southwestern BC. Helijet is celebrating its 20th anniversary in business and has won numerous awards for outstanding customer service and safety standards.

ACROHELIPRO teams with Carson to develop S-61 ‘Glass Cockpits’
ACROHELIPRO Global Services Inc. has teamed with Carson Helicopters to outfit the first two of Carson’s fleet of Sikorsky S-61s with SAGEM Avionic’s Integrated Cockpit Display System (ICDS) retrofit. In addition, Carson has selected to work with ACROHELIPRO on an S-61 airframe rewire program for 10 helicopters, with the work taking place over the next two and a half years.

The innovative system pioneered by Carson, SAGEM and ACROHELIPRO that has previously been integrated by ACROHELIPRO into the Bell 205, 206 and 210 platforms, includes five ten-inch cockpit displays. Each system also incorporates two Primary Flight Displays (PFD) and two Multi-Function Displays (MFD); one for both the pilot and copilot. An additional centre instrument panel-mounted MFD houses a Caution Advisory Panel (CAS) to facilitate easy viewing by both pilot and copilot.

Successful ground runs for H-92 fly-by-wire
Sikorsky Aircraft Corp. has reported the successful ground testing of new fly-by-wire technology designed to improve significantly the maneuverability, safety and effectiveness of aircraft.  It will debut on 28 H-92 helicopters that the Canadian military forces will begin receiving in early 2009.
The fly-by-wire system electronically links the controls inside the cockpit with the exterior actuators, the movement of which enable the aircraft to maneuver where and how the pilot intends.  Eliminating the traditional mechanical linkage saves weight, reduces maintenance costs, adds capability and improves performance.  The new system was developed in association with BAE Systems.

The H-92 is a military variant of the Sikorsky S-92 helicopter.  The Canadian Forces will use the aircraft for search and rescue, anti-submarine warfare, anti-surface warfare and utility transport. In addition to the fly-by-wire system, they will feature the Rotor Ice Protection System, which Transport Canada certified in 2005 as enabling safe flight into known icing conditions.  Other features include a full glass cockpit, 360-degree radar, forward looking infrared system, acoustics mission equipment, torpedo armament system, full defensive protection suite, shipboard haul-down system, and automatic blade and tail fold. 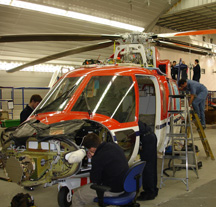 Lider Aviaçao will send various major component units to Heli-One for overhaul on an exchange basis. Main, intermediate and tail gearboxes, along with other major components from Lider Aviaçao's fleet of Sikorsky S76, Bell 212 and Bell 412 aircraft will be overhauled by Heli-One, and exchange units will be provided.

Vector Preferred Bidder
Vector Aerospace has been named by the British Ministry of Defence as the preferred bidder for helicopter rotary-wing and components businesses.

The Toronto-based aviation repair and overhaul services company said in July that the planned sale will include a repair site in Southampton and component repair facilities in Almondbank, Scotland.

Vector estimated that revenue from the businesses could total about $100 million annually. The deal still faces due diligence, consultation with representatives of relevant trade unions and a final sale agreement, the company said.

ACROHELIPRO recognized by FAA for Capstone ADS-B contribution
ACROHELIPRO Global Services Inc, a subsidiary of Vector Aerospace Corporation, received recognition from the Federal Aviation Administration as a “Partner in Safety,” resulting from the company’s substantial contribution to the Automatic Dependant Surveillance-Broadcast (ADS-B) program trial, which the FAA recently integrated into the US Automatic Dependant Surveillance-Broadcast (ADS-B) program.
On Aug. 20 ACROHELIPRO received a plaque from the FAA that reads:

AFS representatives said paperwork has also been submitted for European EASA approval of the A119 barrier filter, allowing the use of the new inlet option for all operators.

The IBF system for A119 Koalas features flat filter assemblies with an integral bypass design.  A filter maintenance aid allows for on-condition status checks between established cleaning intervals, eliminating unnecessary service. No restrictions are imposed for flight in falling or blowing snow or with visible moisture in non-icing conditions. The system is already in use by Koala operators performing law enforcement, firefighting, utility and maritime surveillance missions across the globe.

Most Powerful RTM322 Achieves Certification
The most powerful version of the RTM322 turboshaft engine to date has received its Civil Type Certificate from the European Aviation Safety Agency, reports Rolls-Royce Turbomeca (RRTM). It has been tailored specifically to operate in the NH90 helicopter in arduous ‘hot and high’ conditions.

The ‘Step 0’ engine has a 30-minute takeoff rating of 2,580 shp and has a 7% power increase over the RTM322-01/9 variant. It has been selected by the Royal Air Force of Oman to power its fleet of 20 twin-engined NH90 helicopters and engine deliveries to the helicopters’ final assembly line at Eurocopter are already under way.

In addition, an RTM322-01/9A powered helicopter is undergoing trials in Oman, operating successfully in ambient temperatures of up to 48° C.The FADEC-equipped RTM322 has been selected by 10 of the 12 NH90 nations that have made an engine selection.

Approximately 1,600 RTM322 engines, including orders and options, have been announced for NH90, WAH-64 Apache and EH101 helicopters.

Getting a handle on rotorcraft icing: DND NRC Joint Research Project
Testing a search-and-rescue helicopter under icing conditions is sometimes a risky business. Recently, when Canada's Department of National Defence (DND) tested its new Cormorant helicopter by flying it through a spray cloud generated by a specially equipped US military helicopter, as advised by NRC Aerospace, it was in for a shock. In one particular trial, ice that had built up on the main rotor broke off and struck the tail rotor where it dislodged more ice, triggering severe tail vibrations in the process – and alarm among the crew. Finding a way to prevent this from happening in real situations became a priority. It grew more acute when a search of existing ice shedding studies turned up little useful data.

NRC Aerospace and DND therefore decided to set up a jointly funded research project to study helicopter icing and then use their new knowledge to develop predictive tools. The five-year study will explore various aspects of the problem, including ice formation, ice shedding and ice trajectories.

The knowledge gained from the tests will aid in developing a predictive tool for ice shedding. NRC researchers also plan to extend the full-scale rotor ice accretion and shedding studies to supercooled large drop (SLD) icing. The knowledge generated will enable authorities to incorporate SLD conditions into their certification requirements.

Canada is internationally known for its helicopter operations, which in winter are frequently carried out in icing conditions – particularly off the east coast when sea states get too rough to safely ferry people by boat to and from oil platforms. De-icing systems exist but they're expensive to install, their weight reduces payload, and their complexity results in more frequent breakdowns. Better, more cost-effective ice protection systems are therefore increasingly being sought by helicopter operators and manufacturers.

Prism Helicopters operates a fleet of MD 500 and AS 350 helicopters used extensively in the forestry and mineral exploration industries. Iridium tracking capabilities provide Prism unparalleled oversight of its aircraft, enabling the company to efficiently manage the fleet and quickly reposition helicopters as necessary. Service over the Iridium network facilitates immediate access to two-way text messaging and secure voice communications, and the MMU supports extensive pre-programmed message and phone number storage.