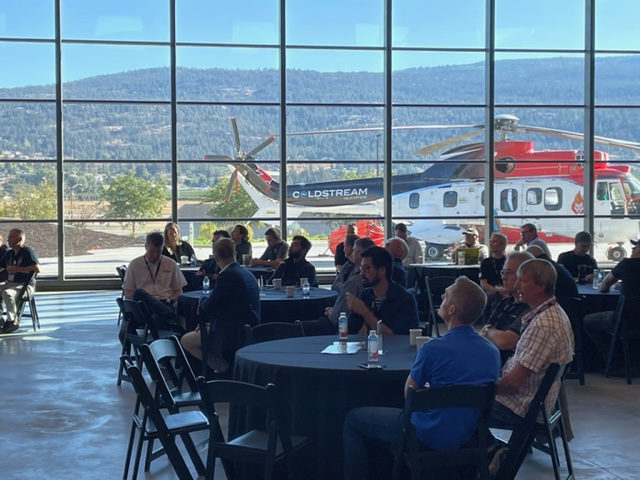 More than 140 people attended the 3rd annual Aerial Firefighting Conference, presented by Wings and Helicopters, at the recently opened KF Centre of Excellence in Kelowna, BC, on September 20, 2022. The one-day conference featured 28 exhibitors focused on the sector, as well as five mainstage presentations, including two panel discussions with operators and suppliers.

Paul Quinn, Executive Director, KF Centre for Excellence, kicked the day off discussing the world-unique facility and its goal to promote and preserve Canadian aviation and aerospace with an emphasis on developments in the Okanagan Valley. Designed to reflect the fuselage and wings of an aircraft, the 60,000-square-foot KF Centre will initially be home to a de Havilland Mosquito bomber, a newly restored Hawker Tempest MKII, and the now retired Conair Convair 580 waterbomber, among other historically significant aircraft.

Both KF Aerospace and Conair Group were among the sponsors of this year’s Aerial Firefighting Conference, along with Canadian Propeller, De Havilland Aircraft of Canada, Fire AI, Guardian Mobility, Kadex Aero Supply, Tempest Aviation Group and Spidertracks. Yellowhead Helicopters flew in a fire suppression equipped BK 117 for static display at the event, while Coldstream Group brought in one of its 10 Super Puma Firecats, along with some of the drone technology it uses in support of its wildfire fighting actitivies.

Trevor Mitchell, President and CEO, Helicopter Association of Canada (HAC), the presented an eye-opening update on the state of Canada’s helicopter industry, with an emphasis on statistics reflecting the need for the industry to focus on attracting new employees. One of the primary statistics presented by Mitchell, as sourced from public data provided by Transport Canada, showed that the number of helicopter pilot licences issued has decreased by more than 70 per cent in Canada over the past few years. Mitchell also outlined some of the program for HAC’s upcoming conference taking place from November 2 -4 in Calgary, Alberta.

The final presentation of the day came from David Thomas, Director of General Aviation, SKYTRAC, one of the world’s leading developers of flight following and flight data monitoring (FDM) technologies which is also based in Kelowna. Thomas focused on the impressive development of FDM and how it is helping companies better manage fleets, train and to fight fires. He was then joined on stage by two FDM experts, Conner Heinbuch of Guardian Mobility and Randy Langfeld of Spidertracks, for a discussion of how the technology is being employed by operators around the world and why FDM has not yet be as widely adopted in Canada as one might expect.