Cathy Press, through her company, Chinook Helicopters, has been a major player in Canada and abroad. 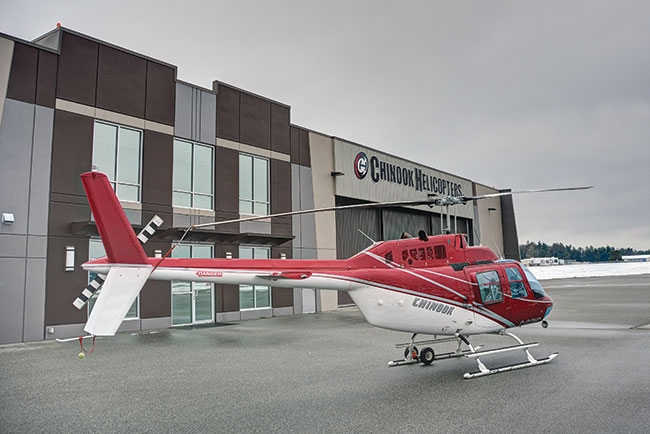 Airside at Chinook Helicopters. Bell 206 on the apron. Cathy Press

Past recipients represent a “who’s who” from all sectors of the B.C. aviation community. When I spoke with Press earlier that evening, she was excited to share a few details about her impending trip to India exploring potential new markets. We parted with a commitment to get together upon her return and talk about what the future looks like for both herself and Chinook.

We finally had that talk in mid-February, in her office at Chinook’s facility at Abbotsford International Airport (YXX) after a walk through the building, now bulging with the addition of the fixed-wing program and new simulators for rotary and fixed-wing.

PD: You’ve got a lot going on here recently — and not to mention this is your twentieth year as CEO.

PD: Why move into fixed-wing?

CP: There were several things. We saw a need in the local market, but the main objective was to support our helicopter IFR program. Then through a company in Thailand that we’ve had a long-standing relationship with supplying helicopter people, we were approached to provide fixed-wing training as part of a cadet program. The numbers were 15 [students] immediately and it has the potential for five years. It was an opportunity that was presented to us through that existing relationship and we made the decision to go ahead and invest in the aircraft to do the project.

PD: There was also a recent announcement about a partnership with the BCIT [the Airline and Flight Operations Commercial Pilot Program].

CP: We’re going to provide the helicopter training component, which is new. I probably approached Gord Turner at BCIT about five years ago and it has taken that long to get the course through all the different committees that are involved. The student starts off at BCIT for the fundamental aviation background and then they do their fixed-wing PPL (with Pacific Flying Club at Boundary Bay) and then they start their commercial helicopter license with us. It gives them a broader knowledge of the industry and when they start with the helicopter they are definitely ahead of someone coming in off the street.

PD: You’ve got a strong connection with Thailand and I know you have a long history with China as well, but when we spoke at Silver Wings you were on your way to India the week after.  Were you part of one of the provincial or federal trade delegations that have been over there recently?

CP: I did the trip personally, totally on a personal basis. I contacted trade commissioners in Delhi, both federal and provincial, and they were very helpful. In Delhi we tried to do a market scan of what existed there in terms of pilot training and what we see is that all their helicopter pilot training is sent out to foreign markets – Canada, the U.S. and Australia are the main players. We got an idea of what that market looks like and we had some meetings while we were there, made a presentation and [got to] be part of a panel at an aviation expo. The expo was quite small compared to what we would expect. We had already met most of the people at the expo through the trade commissioners. The market is just beginning.

Airside at Chinook Helicopters. Bell 206 on the apron.

PD: You are very hands-on in getting out into the foreign markets. Have you had any comments along the way about the fact that you’re a woman? I know I said foreign markets, but even in Canada there aren’t many women in similar positions in the aviation industry.

CP: In my 35 years in the business I haven’t felt any pressure about being a woman. Maybe it’s because I grew up in an aviation family and had aviation people around me all of my life. I haven’t spent a lot of time or energy being concerned about what sex I am and what people might think about it. That said, I am very supportive of young women in the business. Now, I have joined a group of women in Vancouver and this has been very helpful to me and [the] business from a leadership point of view. When I was younger and the business was smaller, it was the pilots and the mentorship around the specific job skills that I needed, but now as the business morphs, I need business skills and I don’t have them. Now, I’m able to reach out to people who are in different businesses to gain the skillset that I need. It’s sometimes easier not to be in the same business, because then you could be in competition with each other.

PD: People are apt to think that their business is unique and not like other businesses. Have you found many differences or similarities with aviation and the business community at large?

CP: I’m not seeing much difference with aviation. There are some very niche things and we have our own challenges. I’ve gone to meetings where the conversation is centered around Millennials – how they are high-maintenance, they need the world and you must make them feel good about themselves and on and on. I put my hand up and said I’ve worked with helicopter pilots for 30 years, so is this really new? (Laughs). I’m also involved with AIAC to be a voice in some areas, such as the length of time it’s taking to process pilot licenses and registration papers. We (helicopters) don’t make up a large enough part of the market to really get attention from a lot of people. Even though we think we’re important, we’re just not there in numbers. Fixed-wing takes up more than 80 per cent of the market and now UAVs are getting lots of attention. The helicopter is a small part of that, but you need such incredible skills to do all the jobs within that business itself. That’s what makes it challenging. You need such detailed skillsets.

PD: You say you’re new to these groups, but I noticed you received some recognition from that larger business community in the past year.

CP: Yes, there was the BMO Celebrating Women in Vancouver Award and there was an Enterprising Women of the Year Award. [Press didn’t mention it, but the BMO Award was in the category of Innovation and Global Growth, and the Enterprising Women award is presented to female business owners from around the world.]

PD: Can we talk about customer service, as you see it? Maybe it’s something in the water out here, but everyone associated with Chinook, whether they are students, staff or alumni, is unfailingly positive about what Chinook is doing.

CP: For me, this business is built very much on being honest with people, whether they like it or not.  Being straightforward with them and caring about where they are going with this, even if caring about them means they don’t continue in aviation. Our strength, over the last 35 years, has been in being able to have those conversations with people. Be transparent with people, right from the first day they walk in the door.

PD: With your trips to India, China and other overseas markets, are you considering taking Chinook to those markets?

CP: I’ve looked at different scenarios and at the end of the day I am a Canadian. I like my business in Canada, I enjoy the business and I like what I have. I worked hard to get to this point and I don’t see the need to create something just for the sake of creating something. I can do the best job I can do by having people come to my establishment where I can control the time, the amount, the service, the aircraft – all of it. As soon as I step into another country, I lose control of the people who work on the aircraft, test the aircraft, fly the aircraft. There would be a loss of control and we don’t know what that would look like. Provide service, first and foremost to Canadians, and secondly to the different countries.

I don’t want to work with just one country. I want to be the company that works with all countries, because we will diversify, and we will be a stronger and better company as a result. The Thai market has pushed the acquisition of the fixed-wing aircraft. The foreign market pushed towards the seven aircraft, but it’s Canadians that will maintain them. We were going in that direction, but now we’re getting there more quickly. We are building a new 18,000-square-foot facility next door to accommodate the fixed-wing program.

I’ve gone into this with my eyes open – this is what I can count on and this is what we are doing today. Even if we had a total collapse of the foreign market, we could survive in the Canadian market. Our strength has been adding on to what we already do. That has worked out very well for us.