Now in service with the U.S. Marine Corps and Air Force Special Operations Command, the V-22 is a tiltrotor aircraft with engine nacelles at the tips of both wings.  With the nacelles in the vertical position the V-22 can take-off, hover and land like a helicopter.  With the engine nacelles in the horizontal or forward position the V-22 can fly more than 300 mph with the long range of a fixed wing turboprop airplane. 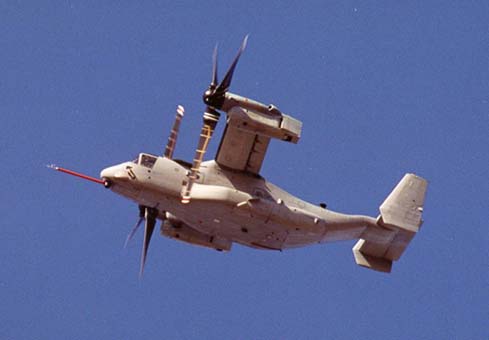 “We’re delighted and honored that POPULAR SCIENCE has chosen the V-22 for recognition this year,” said Bell Boeing Program Director Bob Kenney. “This is a tribute to the thousands of Bell and Boeing employees who work on the V-22 as well as the hundreds of young men and women with the Marines and Air Force who operate and fly the Osprey.”

Each year, the editors of POPULAR SCIENCE review thousands of products in search of the top 100 tech innovations of the year; breakthrough products and technologies that represent a significant leap in their categories.  The winners—the Best of What’s New—are awarded inclusion in the much-anticipated December issue of POPULAR SCIENCE, the most widely read issue of the year since the debut of the Best of What’s New in 1987.  Best of What’s New awards are presented to 100 new products and technologies in 10 categories.  The V-22 Osprey is part of the Aviation & Space category.

Boeing Rotorcraft Systems, a division of The Boeing Company [NYSE: BA], and Bell Helicopter, a unit of Textron Inc. [NYSE: TXT], share responsibility for production of the V-22.  At its Rotorcraft Systems factory in suburban Philadelphia, Boeing builds and ships completed Osprey fuselages to Bell’s Amarillo, Texas, facility for installation of aircraft wing and tail assemblies and delivery to U.S. armed forces customers.

The V-22 Osprey program is slated to deliver 458 tiltrotors in the next decade to the U.S. Marine Corps, U.S. Air Force Special Operations Command and the U.S. Navy.

Textron Inc. is an $11 billion multi-industry company operating in 32 countries with approximately 40,000 employees. The company leverages its global network of aircraft, industrial and finance businesses to provide customers with innovative solutions and services. Textron is known around the world for its powerful brands such as Bell Helicopter, Cessna Aircraft Company, Jacobsen, Kautex, Lycoming, E-Z-GO, Greenlee, Textron Systems Corporation and Textron Financial Corporation. More information is available at www.textron.com.