Port Metro Vancouver has donated a specialized infrared camera to North Shore Rescue. When required by North Shore Rescue the camera will be mounted to a helicopter and used as a tool to help locate missing people in challenging terrain. 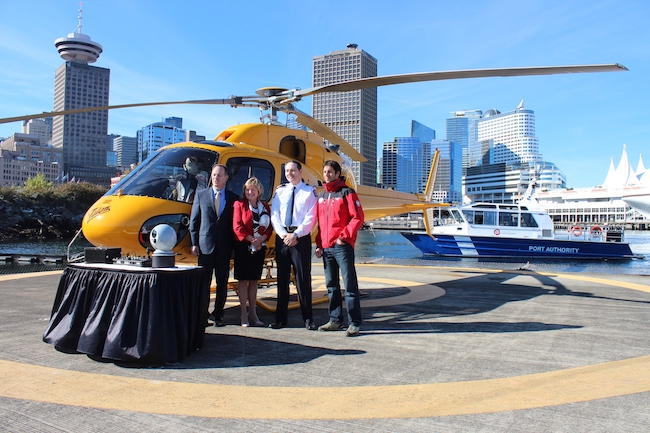 The camera, a SeaFlir II-C stabilized imaging system, utilizes FLIR (forward looking infrared radiometer) technology to locate the heat of an object or person, known as a heat signature. The technology can be very effective when a direct line of sight may not be possible. The specialized camera has the ability to lock onto a heat source and track it for extended periods of time.

“This camera was used by our operations crews to maintain the safe, secure, efficient and reliable movement of marine traffic and cargo within Port Metro Vancouver’s jurisdiction,” said Peter Xotta, Port Metro Vancouver’s Vice President of Planning and Operations. “As we have recently purchased new patrol boats already outfitted with similar technology, we are delighted to support North Shore Rescue by donating what remains a very useful tool.”

The steep, tree-dense terrain of the North Shore Mountains, where North Shore Rescue primarily operates, can make it very difficult to locate lost or injured people. In many cases a subject may be obscured from view by boulders or poor lighting conditions, or may be incapable of getting into a large open area in order to flag down a search helicopter. “The North Shore Rescue team assists the police, fire and ambulance service with mountain search and rescue, helicopter rescue and urban search and rescue. North Shore Rescue members are frequently called out to look for lost or missing subjects that are located in challenging mountainous terrain,” said Jim Loree, North Shore Rescue. “The heat locating abilities of the FLIR camera will give the search crews an added advantage of being able to locate a subject without relying exclusively on the human eye.”

North Shore Rescue expects to have the camera in operation by January 2016.