Succeeding on the fire line 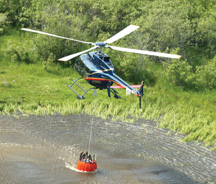 July 4, 2007: In the US, it’s Independence Day. But in northern Manitoba, all eyes are on the 13 forest fires currently burning. “Lightning that occurred on July 3 was responsible for igniting the fires,” says the Manitoba government’s Forest Fire Update. So far this summer, “Manitoba has reported 174 fires having burned 6,526 hectares.”

To reach these remote fires, firefighters rely on helicopters. They count on rotorcraft to get them into these areas, and to evacuate them fast when the fire gets out of control. Helicopters also haul supplies, take out casualties, and waterbomb the fire sites from the air. In the truest sense of the word, they are the workhorses of Manitoba’s forest firefighting service.

Prairie Helicopters of Gimli – based at the same airstrip where the infamous ‘Gimli Glider’ (Air Canada B767 C-GAUN) once landed – is one of the companies that provide the workhorses. During the summer months, Prairie Helicopters’ Bell 206B JetRanger, LongRanger III, and Bell 407 aircraft are constantly in the air up north, moving men, materials, and water to wherever they are needed. “Forest firefighting is our bread-and-butter,” says company president and co-founder Michael Persoage. “During the summer months, our five pilots and three mechanics are working ‘round the clock, keeping our fleet flying.”

Starting Small
Before 2001, both Perosage and his business partner Derek Longley worked for other people in the helicopter industry. “Derek was a maintenance engineer/pilot, and I was a pilot,” Persoage says. “So when we decided to open Prairie Helicopters, he became the mechanical engineer, and I became the chief pilot and flight instructor.”

Prairie Helicopters started small. “We began with a single JetRanger and a little hangar in Gimli,” he recalls. “We were the only people in the company, and money was very tight. But we had been bitten by the entrepreneurial bug, and wanted to be our own bosses. So by the skin of our teeth, and a lot of help from the bank, we went into business.”

To pay the bills while they looked for business, Prairie Helicopters opened its own flight school. “We had one student that first year,” Persoage says.

As for other work? Prairie Helicopters had hoped to make its money in crop spraying. However, a lack of work in this area motivated them to diversify into charter flights, film production and heli-
skiing; anything that would keep cash coming in.

“Money wasn’t the only challenge,” he says. “There was a lot of Transport Canada paperwork that we had to deal with; way more than we had planned for. As well, getting insurance was extremely expensive, because – as luck would have it – we opened up just after 9/11.”

Firefighting to the Rescue
Fortunately for Prairie Helicopters, Mother Nature came to the rescue in 2002. As always, the summer months brought lots of wildfires to northern Manitoba and northwestern Ontario – both within Prairie Helicopters’ territory. “It didn’t take long for us to get firefighting work,” says Perosage. “It helped that both Derek and I had a lot of experience flying these missions before we started the company. Since then firefighting flights have become our mainstay.” In the summer months, they are aided by veteran pilot Leo Vergano.

Flying in forest fire conditions is anything but easy. Besides the dangers of approaching acres of burning woodlands, there’s the problems of smoke, airborne debris, and changing air pressures due to heat, which can change the lift capacity of the air being flown through. Then there’s the challenge of dipping, lifting, and releasing long-lined ‘buckets’ filled with thousands of gallons of water. All told, this is work that requires experienced pilots with more than their share of steel nerves.

“I’ve flown in some pretty tough situations, as has any pilot who does this work,” Persoage says. “In one instance, we were called in to evacuate a fire crew trapped by an out-of-control wildfire that had turned toward their camp. They had about 20 people, who we could only take out in batches of three. So we got in there fast, flew the evacuees to a nearby hill of gravel out of harm’s reach, then came back for more. We couldn’t even see where the fire was, the smoke was so thick.”

The next morning, Persoage flew over the camp, or what remained of it. “The fire had gone right through it,” he recalls. “Tents, vehicles, equipment – all burnt and destroyed. I hate to think what would have happened had we not been able to get the men out. It would have been disastrous.”

Other Duties
As mentioned earlier, firefighting is just one of Prairie Helicopters’ many missions. Others include charter flights, sightseeing, aerial photography and surveying, and traffic reporting. That’s right: Prairie Helicopters has a Robinson R44 in its fleet that recently served as the traffic helicopter for CJOB-AM in Winnipeg.

That’s not all: Prairie Helicopters continues to run a small flight school. “We’ve got 2-3 students,” Perosage says. All training is done on a one-to-one basis, with bush flying being the school’s specialty. As for staff? “We have five pilots, three mechanics, and three flight instructors.”

Hanging Tough
Given its expansion over the past six years, Prairie Helicopters can clearly be called a success. Yet there are times when Persoage wonders if he might be better off working for someone else. “If it’s a rainy summer, we can find ourselves sitting around, paying financing and insurance costs on our helicopters as they sit on the tarmac. Sometimes it is difficult to find new work, and to keep the cash flowing. It can also be tough to find the right pilots: You need to have the right mix of skills and personality to do this job. So yes, there are times when I wonder what I have got myself into.”

On the other hand, Perosage enjoys being his own boss and running his own company. “Derek and I aren’t quitters,” he laughs. “When things get tough, we just work harder. This said, we wouldn’t be here today without the help of our bank; they’ve really been there for us. As well, there are three local semi-retired pilots – James Gray, K.O. Ostertag, and Tom Arbuckle – who have really helped us out over the years, and continue to help. I don’t know where we would be without them.”

As for the future? “We’ll just keep plugging away, looking for new work while trying to keep our current customers happy,” Persoage concludes. “Besides, this is a great place to fly, and a great place to live!”