For most Canadians, the beginning of the workweek is almost certain to be predictable and routine: an early morning meeting, sifting through e-mails, a quick trip to Tim Hortons. 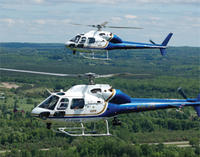 For most Canadians, the beginning of the workweek is almost certain to
be predictable and routine: an early morning meeting, sifting through
e-mails, a quick trip to Tim Hortons. It’s no different for the
helicopter pilots of the Ontario Provincial Police (OPP) airborne unit.
But any similarities – and predictability – quickly end there.

Consider the following scenario: by midday Monday, the OPP helicopter
pilots have set off to begin a search-and-rescue operation for a
missing child who has wandered off from a remote camping ground in
northern Ontario; later in the week they are involved in an airborne
surveillance and backup mission regarding a land dispute protest near
the shores of Lake Erie; the following week begins with a drug/grow-op
surveillance mission in northeastern Ontario.
No two days – or weeks – are the same for the crew of the OPP
helicopter unit, which makes their job both exciting and demanding.
However, one of the greatest challenges they face is dealing with the
vastness and diversity of Ontario, a factor that is often
underestimated.

Ontario is the second-largest province in
Canada. It comprises 1,076,395 sq km, of which 158,654 sq km are inland
water. Ontario’s population is concentrated in southern Ontario, home
to Toronto, one of the most vibrant and densely populated cities in
North America. In contrast, however, Ontario is also home to Polar Bear
Provincial Park, an isolated wilderness park in the far north of
Ontario on the western shore where James Bay meets Hudson Bay. There
are many northern communities that are isolated in the remote areas of
the province, and it is part of the OPP mandate to help the police
agencies serve these communities.

As Sergeant Scott Ross, a
veteran pilot with the OPP detachment in Orillia points out, the
distance from Windsor to Red Lake in Ontario is comparable to the
distance from Toronto to Orlando. That’s a lot of ground to cover, so
whatever challenges come their way, they must be ready to respond
quickly.

The Aviation Services Section of the OPP first acquired
helicopters in 1974 – two Bell Jet Rangers. In 1990, the fleet was
replaced with two Eurocopter AS355F2 Twin Star helicopters, which are
used today and are strategically located at bases in Orillia,
(alongside the OPP General Headquarters) and Sudbury. The OPP also
operates a Pilatus PC-12 out of Thunder Bay.

Between the Orillia
and Sudbury bases, there are five helicopter pilots (all of whom are
also police officers), and two aircraft maintenance engineers, who
together are responsible for the operation, maintenance and control of
the fleet. The pilots have numerous decades of experience between them,
the majority of them having logged more than 20 years of service. They
are quick to point out that although they find their work rewarding and
they are proud of what they do, the success of their missions is a team
effort between central command and the various units they work with,
and they simply play a role as part of a bigger team with the same
goals.

Used for Day/Night VFR operations, the efficacy of the
twinengine Twin Star has been proven time and time again over the last
17 years. Staff Sergeant John Crate, Unit Manager, says their decision
to purchase the Twin Stars was based on the fact that they fit
perfectly with their mission profile. Primarily used for SAR and visual
and electronic surveillance, the AS355F2s perform well in their varied
and numerous roles which include: drug eradication; support to
emergency response teams and tactical rescue units; prisoner escort;
and assistance to groundbased personnel. The extra redundancy and
safety that the twin engines provide is a vital component due to the
nature of the terrain they cover.

The main focus of the OPP
airborne unit is the search and rescue of lost citizens, which
represents approximately 50% of their work and involves about 150
searches annually. Quite often this includes searching for children who
are missing, elderly people with dementia who have become disoriented
and wandered off, boaters, campers, and hunters who have lost their
bearings, and snowmobilers and snowshoers who have gone astray in
rugged terrain and unforgiving conditions.

At 120 knots and
three hours flying time, the crew can cover approximately 360 nm before
refueling. When flying on large-scale manhunts or missing persons
cases, the appropriately registered C-FOPP and C-FOPS occasionally work
in tandem, and because of the vastness of the province, must plan out
their fuel stops carefully. They often rely on the fuel “caches”
consisting of drums provided by the Ministry of Natural Resources that
are strategically located in the north, sometimes in places such as
remote fields.

Because of the sensitive nature of the SAR
operations, particularly when dealing with children or the elderly
where dangers such as hypothermia can quickly set in, minimizing search
time is critical. Detecting body heat, the FLIR (Forward Looking
Infrared) camera that protrudes from the bottom of their aircraft
becomes an important aid in their search efforts. However, it works
better at night (where temperature differentials are greater), and it
doesn’t assist them when searching in a wellcanopied forest. This is
just one example of where their work in conjunction with the OPP canine
unit is invaluable. One thing is clear from talking with the officers
from both the helicopter and canine units – they share a mutual respect
for each other’s work and they depend on their teamwork to successfully
get the job done.

When HELICOPTERS spoke with Commissioner
Julian Fantino recently about the merits of helicopter use in police
work, he commented: “The helicopter is really a force multiplier.
Because of its viewing platform and its ability to communicate down to
the front-line officers (it) is really a much more efficient and more
effective deployment of people.”

Based at General Headquarters
(GHQ) of the OPP in Orillia alongside the Aviation Services Section,
Commissioner Fantino is the highest ranking officer in the Ontario
Provincial Police and a long-time proponent of helicopter use in police
work. Adds Fantino, “with a perspective from the air, you get a much
broader appreciation of the issues.”

The modern technology on
board the Twin Stars allows the crew to capitalize on this unique
vantage point. Tools of the trade include the previously mentioned FLIR
cameras that were purchased in 2004 thanks to financial assistance
(just under $1 million) received from the National Search and Rescue
Secretariat (NSS) under their SAR New Initiatives Fund (NIF).

Each
helicopter also has a Nightsun SX16 searchlight that will light up an
area the size of a football field, along with a digital video downlink
system (procured via NIF assistance) that allows the crew to transmit
images and data in real time to ground-based units, enabling them to
make tactical decisions about the deployment of people. In addition to
these tools, the OPP has also chosen the ITT Night Vision Goggles to
complement its arsenal, which it hopes to acquire and be operational by
this fall.

Drug eradication is another key mandate for the
helicopter unit. Each year in September and October, the OPP airborne
team leases an additional helicopter from a civilian company and heads
out to work with local drug enforcement units on the OPP drug/grow-op
detection campaign. As related by the officers, Ontario-grown marijuana
is considered to be very high quality, with a mature plant having a
street value of approximately $1,000. Therefore, the eradication of one
thousand plants can mean as much as $1 million out of the pockets of
the drug dealers. Not only that, because of its high quality, if the
marijuana plants make their way across the border, they are typically
traded for such things as cocaine, crack and guns, which takes the
seriousness and importance of their mission to another level. According
to the pilots, it is not hard to spot the marijuana plants when flying
about 800 feet above the ground. The fluorescent green plants – unlike
anything else that is grown naturally in Ontario – are a dead giveaway.

Ontario
is filled with a network of 400 highways (a shared jurisdiction between
the OPP and other regional forces) and other major routes. Although the
OPP does not perform random patrolling for erratic driving and speeding
on a regular basis, it does lend a hand when needed. As Commissioner
Fantino points out, “Unlike municipal policing, we don’t do random
patrols ….we are very much directed in the things that we do.” On
holiday long weekends, when traditionally an increased number of
driving and boating fatalities occur, the OPP helicopter unit lends
their valuable support to the marine overview and highway patrolling
from the air – looking for high-end driving offences and communicating
them down to the units on the ground and water.

This support
also extends to other police agencies engaged in various tactical and
emergency response missions, and to the military. Comments Fantino, “As
part of the OPP provincial mandate we spend a lot of our time helping
other police agencies, especially those that are more isolated in the
remote areas of the province.” When called upon, the OPP helicopter
units work in conjunction with the Canadian Armed Forces Rescue
Coordination Centre (RCC) out of Trenton. Referred to as “tasking,” the
search-and-rescue mission will be the primary responsibility of the
RCC, and a secondary role will be assigned to the OPP helicopter unit.

Public
awareness and education is a key component for any airborne law
enforcement agency in Canada. Since the pilots of the helicopter units
have seen first-hand the dangers associated with people getting lost in
unfamiliar settings, they are quite happy to do their part to educate
the public on safety awareness. As part of their public education
campaign, the pilots give hangar tours on a weekly basis, mainly to
schoolchildren who are taught safety awareness and survival skills. The
message is clear and simple, says Sergeant Dan Mulligan, another
veteran pilot at the unit: Stay put, “hug a tree” and wait…the OPP
canine and helicopter units are on their way.

Since April to
November is the “busy season” for the unit where they are on call 24/7,
much of the police training is done during the rest of the year. This
year the OPP in Orillia hosted the Airborne Law Enforcement Association
(ALEA) Tactical Flight Officer Course which marked the first time the
seminar was held outside of the US. The training course was designed to
provide both Canadian and US aircrew members the tactical skills
necessary to successfully support ground units engaged in a variety of
law-enforcement missions. They also participate annually in the ALEA
Canadian regional safety seminar, which will be hosted by the RCMP
Vancouver Air Section this fall.

The week has successfully ended
for the crew of the OPP helicopter units. Success for them has a broad
definition, but it most certainly includes doing their part for a great
team of people who help every day in achieving the OPP’s mandate to
keep Ontarians safer.

And it is the special combination of the
technology and the people that make it operationally possible for the
OPP helicopter unit to provide this level of service to the people of
Ontario, at the times when they need it the most.