The Royal Canadian Air Force crew of search and rescue helicopter “Rescue 901” won this year’s Cormorant Trophy for the rescue of five crewmen forced to abandon a fishing vessel 250 km offshore in fierce weather and rough seas. The Cormorant Trophy was commissioned by Leonardo (formerly AgustaWestland) in 2002 as an award to be presented annually to a Canadian civilian, government or military helicopter crew performing the most demanding helicopter rescue of the year. 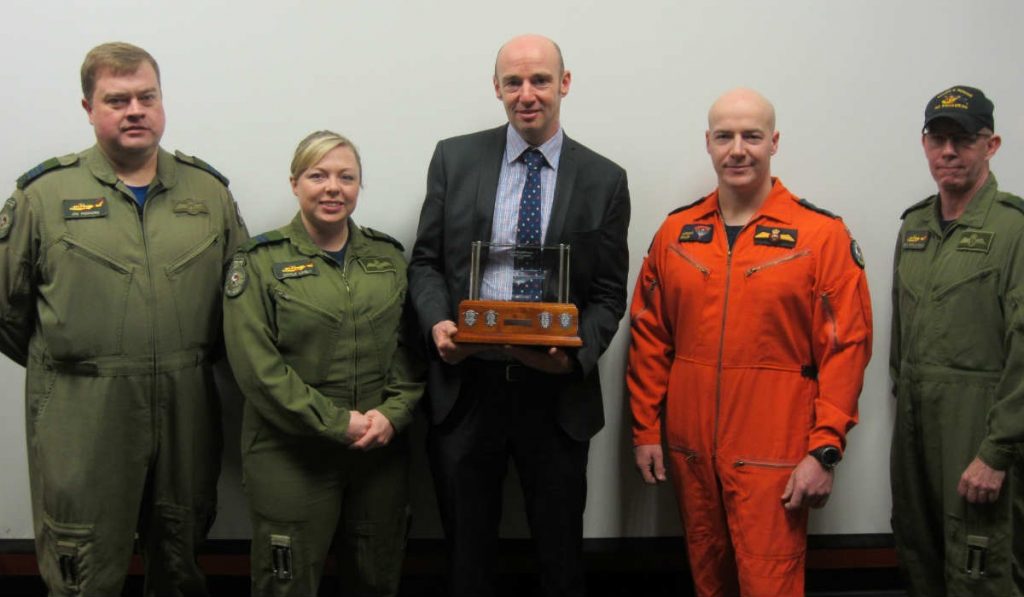 “The selfless heroism displayed by the team onboard Rescue 901 in this monumental rescue of the crew of the Fishing Vessel Northern Provider exemplifies the efforts of all RCAF search and rescue crews each and every time they head off into danger to put their lives on the line to save Canadians from coast-to-coast-to-coast,” said Mark Fair, Canadian Customer Support, Leonardo Helicopters. Fair presented the Cormorant Trophy to the recipients in a ceremony at CFB Gander.

“It is an honour to be recognized for the actions of our crew during this rescue mission,” said Major Pinhorn, who is also Commanding Officer of 103 Squadron. “The men and women of 103 [SAR] Squadron, as well as those from search and rescue organizations all across Canada, routinely exhibit professionalism and make tremendous sacrifices in order to ensure that they successfully fulfill their respective SAR mandates.

“To have been selected from such an accomplished group is truly special for the members of our crew, as well as the squadron at large,” said Pinhorn.

In describing the March 5, 2017, rescue that led to the Cormorant Trophy, Leonardo explains the Rescue 901 SAR team knew they had a challenging time ahead from the moment Halifax Joint Rescue Coordination Centre received the distress call from the FV Northern Provider. The compromised boat was 250 km offshore in 10-metre-high waves facing wind gusts of more than 110 km/h.

The Rescue 901 SAR crew stripped their AW101 Cormorant helicopter of non-essential equipment to maximize fuel and the amount of time they could stay on the rescue scene.   As the crew arrived on scene, explains Leonardo, they saw the fishing vessel being tossed in different directions at the mercy of the sea. Multiple obstacles on the ship, such as fishing equipment and sea ice, meant changing the original plan to lower a rescue hoist to pick up the fisherman. Instead, the fishermen would have to jump into the freezing water and be picked up one by one.

This was no easy task as Robison and Bullen alternated rescues, explains Leonardo, dangling from the end of a hoist, being slammed and dragged by the waves and ice chunks. Throughout the rescue Pinhorn and Lively worked to keep the helicopter over the rescue scene, reports Leonardo, rising and falling with the waves as O’Callaghan wrestled with the hoist line trying to guide the SARTechs to the fishermen. At one point, one of the SARTech’s immersion suits was ripped, but he continued to work the rescues despite the cold water entering his suit.

Eventually all five fishermen were hoisted into the Cormorant helicopter and all flew safely back to Gander, abandoning the fishing vessel.