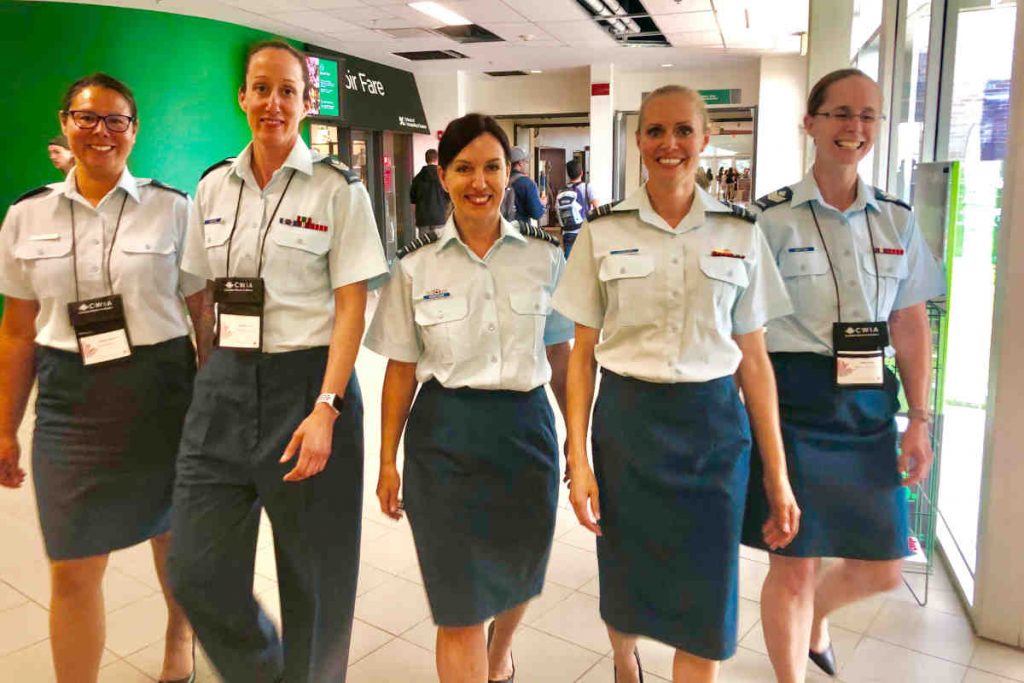 Recently appointed as an Honorary Colonel for the 417 helicopter squadron, Kendra Kincade (centre) spends time with fellow members of the RCAF during the mid-July Canadian Women in Aviation conference in Ottawa.

The first time I ever heard of the term Honorary Colonel was when I was introduced to a lovely lady named J’lyn Nye. We met at a networking event and she struck me as a tall, formidable women with fiery red hair and a strong voice. I wondered if she worked in radio or TV. Turns out she is a radio host by day, but more interestingly, she also serves as an Honorary Colonel (HCol) in the Royal Canadian Air Force (RCAF). I was intrigued. What is an Honorary Colonel? How do you become one and what is the job description? There were just a few of the questions that instantly popped into my head.

How do you get an honorary rank in the military? Each unit decides who they want as an Honorary Colonel. The appointment of an individual to an honorary rank starts with a nomination from a commanding officer. The person may be a former RCAF officer or a distinguished Canadian citizen from a diverse range of backgrounds, including many well-known public and community figures. Radio broadcaster/author J’lyn Nye is such an individual.

Honorary colonels are honorary and advisory. They are vital to fostering moral within the family. They mentor the unit and help build relationships through the Honorary Colonel network. By their very presence, they build and develop community support for their units by providing a public profile – a public face – for the unit.

I never in my wildest dreams ever considered one day I would be taking on this honoured leadership role. My path to becoming an Honorary Colonel began with a surprise phone call from a friend, Major Alexia Hannam, Commanding Officer of the 417 Combat Support Squadron in Cold Lake, Alberta. She had nominated me as the Honorary Colonel of her helicopter squadron. I was excite, and also pretty nervous to begin this new journey in my life. After all the paperwork was done, I could not wait to get started. I took on the role of Honorary Colonel at my March 1, 2019, investiture in Cold Lake in front of family, friends and my new unit. Now, that I have been in the role a few months, I am more honoured than ever.

I have been travelling the country and meeting new people quite a bit this last year and being in this new role has provided me with fascinating experiences. For example, I have just returned from the Canadian Women in Aviation conference in Ottawa, Ontario, where I had the privilege to sit, in my new uniform, with other military members and meet some of the many incredible women who are so proud to serve our country. A particularly fun moment was when I went to my first ironing party – yes, an ironing party – where I was taught how to iron my shirt to military standards. This bonding became a sharing session where other female members of the military described their experiences.

Recently, I traveled to Yellowknife for my first annual gathering of all of the Canadian Honorary Colonels in the RCAF. The conference location was a perfect setting by which to introduce the Honorary Colonels to expert speakers who introduced us to the life and ways in Canada’s North. I learned the importance of looking at Canada as a whole and to not forget the role that northern communities play in not only our history, but also today. One presenter, who particularly resonated with me politely, suggested that when decision-makers in the “south of Canada” make decisions they should remember how sometimes those decisions effect the northern regions, too. Looking at Canada from the North Pole down, rather than just a lateral approach, might be a more inclusive way of decision-making.

The first gathering with my fellow Honorary Colleagues included brainstorming discussions on how we could help the members of the military. They must relocate a lot and it affects the entire family. My learning curve is huge… and I still cannot believe I am counted among the RCAF family and I am fully committed to learning, listening and making a difference. Who knew that my curiosity at a networking event and my question, “What is an Honorary Colonel?” would lead to not only challenging my leadership skills in a whole new way, but to also serve my country.

Kendra Kincade is the founder and director of Elevate Aviation; Employer Brand Specialist and Air Traffic Controller for NAV Canada.