Command of the Royal Canadian Air Force (RCAF) officially changed hands on July 9, 2015, at the Canada Aviation and Space Museum in Ottawa, Ontario.

“The Royal Canadian Air Force has been busy under Lieutenant-General Blondin’s leadership,” General Lawson said, “with an increasingly high tempo of operations at home and abroad, including air contributions to NATO assurance measures in Central and Eastern Europe, and our military mission over Iraq and Syria. As Lieutenant-General Hood takes command, I know that the RCAF will continue to project the airpower needed to meet Canada’s defence challenges.”

As the senior air force officer in the Canadian Armed Forces, the commander of the RCAF is responsible for training, generating and maintaining combat-capable, multi-purpose air forces to meet Canada's defence objectives. He also acts as an advisor to the Chief of the Defence Staff on strategic air force issues. 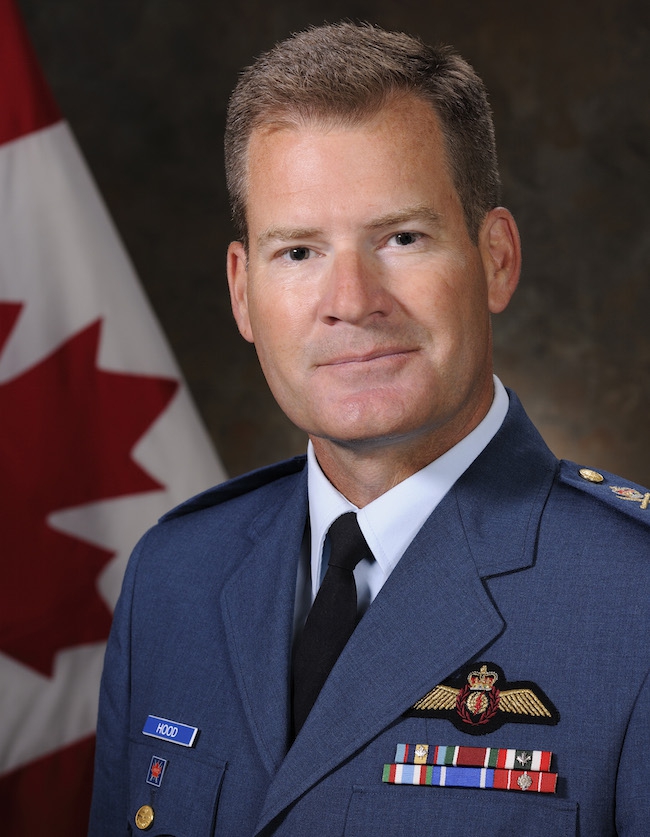 “As our continental operational successes have demonstrated, the Royal Canadian Air Force is an agile Air Force, integrated with our partners and Allies, and with the reach and power needed to carry out Canadian Armed Forces operations at home and abroad,” Lieutenant-General Hood said. “I intend to sustain and build upon the capabilities that have led to those achievements, and ensure Canada and Canadians have an Air Force ready for the challenges of the future.”

Lieutenant-General Hood began his military career as an army reservist with Montreal’s Canadian Grenadier Guards before transferring to the Regular Force and receiving his air combat systems officer wings in 1988.  He commanded both 429 and 436 Transport Squadrons and subsequently served as the commander of 8 Wing Trenton, Ontario, from 2007 to 2009. He leaves his post as Director of the Strategic Joint Staff to take command of the RCAF.

His predecessor, Lieutenant-General Blondin, is retiring after 35 years of distinguished service with the RCAF as a fighter pilot. He has held many commands throughout his career including commanding officer of 425 Tactical Fighter Squadron; commander of the Canadian CF-188 Operational Force in Aviano, Italy; commander of 3 Wing Bagotville, Quebec; and commander of 1 Canadian Air Division, headquartered in Winnipeg.

“I thank Lieutenant-General Blondin for his service to Canada and his leadership of the RCAF during a time when our country and the world have asked so much of the Royal Canadian Air Force,” said Minister of National Defence Jason Kenney.

“I also welcome and congratulate Lieutenant-General Hood on his appointment as Commander of the RCAF and Chief of the Air Force Staff. As more new aircraft arrive at our air bases and the international community continues to call on Canada for support, I’m confident the RCAF will continue to be a source of pride for all Canadians.”