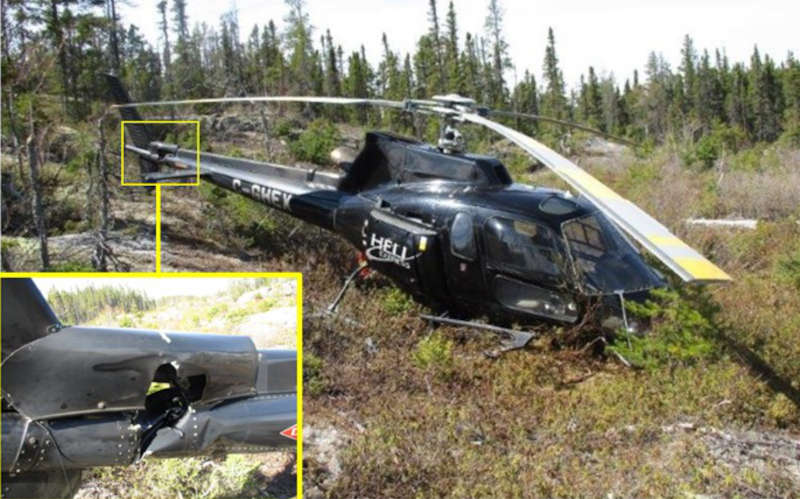 Photo of the wreckage, with inset image showing a magnified view of the damage to the tail (Photo: TSB, Sûreté du Québec)

The Transportation Safety Board of Canada on January 10 released its investigation report into a 2021 accident involving an Airbus AS350 B2 helicopter registered to Héli-Express Inc. near Les Escoumins, Quebec. The investigation (A21Q0024) determined that financial and time pressures interfered with proper operational planning, risk management, and risk mitigation efforts.

On May 11, 2021, two Héli-Express helicopters were scheduled to carry workers and equipment to a work area at a Hydro-Québec transmission line near Les Escoumins. The Transportation Safety Board (TSB) explains the occurrence pilot was notified that a work platform was ready to be transported from the staging area to the team waiting for it.

Shortly after taking off with the platform hanging directly from the cargo hook mounted on the belly of the helicopter, TSB explains the pilot was notified that it was swinging, as had happened on previous flights. The pilot heard a loud noise and released the platform, according to the TSB report, with the pilot subsequently experiencing great difficulty controlling the helicopter’s descent as it landed hard in an upright position on rugged terrain. The pilot was taken to a hospital with serious injuries.

The TSB investigation found that the pilot expected the platform to stabilize as the helicopter accelerated, but it continued to oscillate and struck the tail boom. Analyses by TSB showed that one of the tail rotor blades came into contact with the platform immediately after it was released, tearing out the tail rotor and gearbox in flight without the pilot’s knowledge, and resulting in a yaw (turn) to the left. 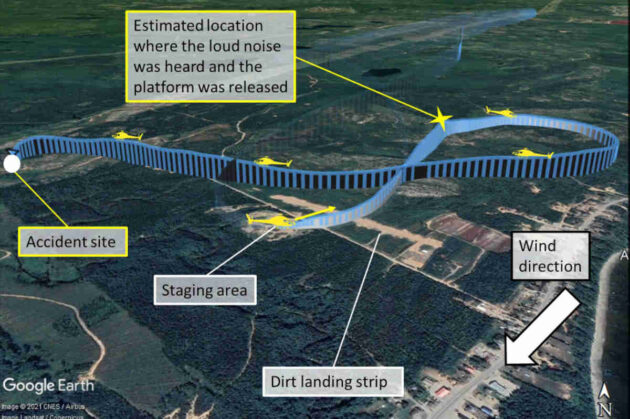 Map showing the occurrence helicopter’s track based on data from the GPS (Image: Google Earth, with TSB annotations)

The pilot attempted to reduce speed and descend as low as possible, explains TSB, before shutting off the engine to stop the turn. TSB explains when the power was cut, however, the helicopter was likely at a height that could not sufficiently dampen the unpowered descent, resulting in substantial damage to the helicopter and injuries to the pilot during the hard landing.

In its report, TSB states the fixed deadlines at the work site and the potential contractual consequences of not meeting them put time pressure on the site workers and indirectly on the pilots. To save time, TSB notes the pilots opted to transport some external loads without a sling. TSB concludes that given that the risks associated with transporting a light load without a sling were not fully understood by the pilots and the operations manager, and given that no concerns were raised, the pilot concluded that the platform could be safely carried horizontally without a sling.

Following the occurrence, TSB explains Hydro-Québec hired aviation safety advisors with valid helicopter licenses to review all charters before awarding them to air operators. To further ensure safety, Hydro-Québec added a training course for suppliers that covers essential elements for working with the utility provider, including sling operations. The company also introduced site visits and surprise audits, explains TSB, to ensure pilots have the necessary tools to perform their work and that employees are aware of safety standards when working near a helicopter.