The superb facilities at Transport Canada’s Motor Vehicle Test and Research Centre (MVTC) have much to offer the aviation industry, argues PMG Technologies, which manages the MVCT. To that end, PMG has joined the Consortium de recherche et d’innovation en aérospatiale au Quebec (CRIAQ) which facilitates collaboration between aerospace companies. 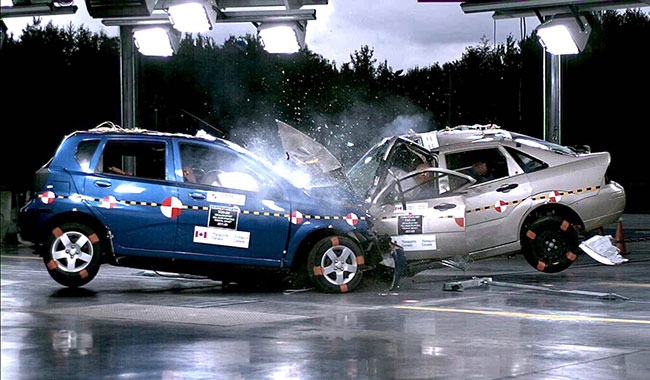 To introduce its capabilities to Quebec’s large aerospace industry, MVTC hosted a CRIAQ research committee meeting, at which members presented projects they are working on. Members also got the cook’s tour. They watched a car impact test on the 200-metre long indoor track. Technicians demonstrated the Hi-Ge sled, which can accelerate a 3,000-kilogram (6,600 pounds) payload to a G-force of 92 in less than one metre (3.3 feet). Members also saw the crash test dummy workshop, environmental chambers and other test equipment.

MVTC joined CRIAQ in March 2013. “We became a member to be closer to the industry and to be able to offer our solutions to CRIAQ members and to support their innovations,” explains Claude Sauvageau, vice-president of testing and capital projects at PMG Technologies.

CRIAQ lists 53 industry members, 21 universities and research centres and 11 associate members. A not-for-profit organization, it is funded primarily by industry, the National Sciences and Engineering Research Council of Canada and universities. The Quebec government funds committee meetings. “Our role is to bring together and help [members] build collaborative building projects. CRIAQ [also] helps fund the projects themselves,” says Clément Fortin, past president and director general, CRIAQ, and senior advisor to the president at Skolikovo Institute of Science and Technology (Skoltech).

Every two years CRIAQ holds a research forum, attended by as many as 1,000 people. This forum included 200 delegates from 15 countries. In essence, CRIAQ is a speed dating R&D service to aerospace companies looking for project partners and collaborators.

“It brings together context, objectives, and partners you are looking for. Each company presents three slides,” Clément says. “At the end of the day, it signs a non-disclosure agreement with interested partners. Now PMG can come to the research forum and say, ‘We’d like to collaborate.’ ”

Since PMG began managing the MVTC in 1996, Transport Canada (TC) has invested $50 million in infrastructure improvements. It asserts that it has the most accurate and reliable test facility in the world. Automotive Testing Technology International agrees. In 2012 it selected MVCT from competitors from around the world for its Crash Test Facility of the Year Award.

“We are capable of doing things that are far better than some other facilities,” Sauvageau says. PMG already has a history of doing research for aerospace companies: Rolls Royce, Pratt & Whitney Canada, Bombardier, Bell Helicopter and Sikorsky. In October-November 1996, for example, Sikorsky did cold start tests at -40º Celsius.

An impressive fact about the refrigeration units for the environmental chambers is that they can maintain a constant temperature with a jet engine running inside; e.g., -40º C, in a P&WC study.

There was also the snowfall study, Sauvageau recalls. “We did a test for Bell Helicopters. Normally, air conditioning is done by taking air from one of the engine’s compression stages. If the ambient humidity is very high, when the humid air is uncompressed to cool it down, the water in the air will freeze, and it will snow into the aircraft. We simulated the humid air, compressed and heated it, and uncompressed the air into Bell’s ducting.”

Bell Helicopter speaks highly of the equipment at the MVTC. “Clearly the facilities at PMG are world class,” Textron’s manager of corporate communications Brian Bianco said. “Bell Helicopter has been a client of PMG’s excellent cold chamber environmental test facilities, so their capabilities are well known to Bell Helicopter and are valued. Further, we did consider using the PMG facility to perform wheeled landing gear “drop tests”; i.e., tests with the aircraft raising up off the ground while we deploy the wheeled landing gear as part of the validation testing of this new landing gear system.”

MVTC’s family of sensor-packed crash test dummies, ready and willing to sign on to any ride, can collect occupant data. “I have seen photos of cockpits with dummies installed in the seats. Our competitors are getting business from the aviation industry, so we should be getting that Hi-Ge sled business. Maybe plane manufacturers would want to do it at PMG,” Sauvageau says.

“Crash testing of full-scale helicopters helps engineers design helicopters to increase survivability for impacts on a variety of impact surfaces, including hard-paved surfaces, soft soil and water,” Bianco says. “Most notably, the helicopter industry conducts crash testing on all energy attenuating seating systems installed in modern helicopters. The objective is to design the seating system to help protect the occupant’s lumbar spine from injury during a vertical crash as well as protecting the occupant from head injury during a forward crash.”

“One of our roles is to bridge that automotive testing with aviation testing,” Clément says. “It’s about learning to work together and find collaboration.” The trick, he adds, is for PMG to find its place among aircraft testing facilities. “It is a matter of PMG finding the sweet spot. I’m sure that with crash and environmental chambers testing, they can do things. It’s obvious.”

Noting that manufacturers could do their testing at home rather than in the United States or Europe, Sauvageau says, “We want to be able to offer a state-of-the-art solution to the aviation industry, while reducing the cost of their business.”