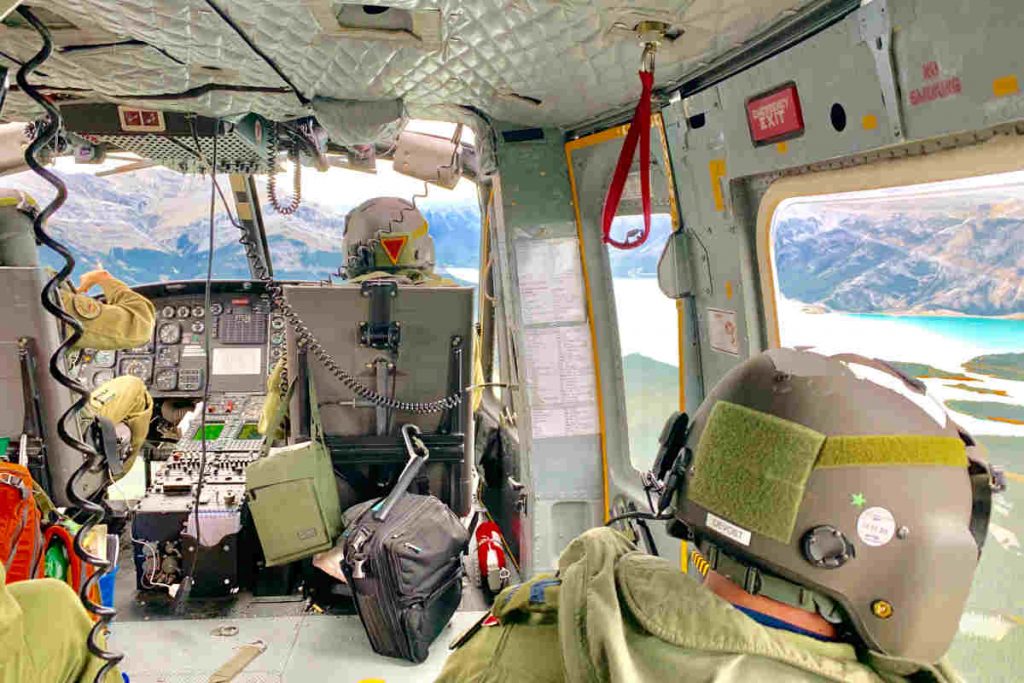 417 Squadron out of Cold Lake, Alberta, performing mountain training for pilots and crew.

How often do you really think about what goes on with people who preform search and rescue duties? I have a such strong admiration for the fearless men and women who put their lives on the line to rescue others. I had the opportunity to follow one such team, the 417 Squadron out of Cold Lake, Alberta, as they flew their helicopter to train the pilots in mountain flying. Working in the mountains is a very different kind of flying and landing because of the rough terrain and strong winds. Having the chance to watch these professional rescuers was an incredible opportunity.

This mission included a Commanding Officer by the name of Maj. Alexia Hannam who took two of her pilots out to train as part of their semi-annual currency requirements. The mission was to fly around the Rocky Mountains and find a place to set the helicopter down. This is not as easy as it sounds. I thought that you just look for a spot to land and well… land. It’s not quite that easy. You actually have to make a number of fly-by passes first to do some prep work.

On these passes you look at your landing spot from different angles. You fly above the spot to see if it’s a good location. Then you do a pass 50 feet below the intended landing spot to check the winds. More passes are done at eye level to make sure it is flat enough to land. A couple more passes, closer and closer, allow the pilots to really assess the situation and check the winds.

The first pilot in the hot seat was Capt. Matt Rowe. He found his first location and it looked great. The spot had a small area that jutted out and, from my uneducated landing a helicopter point of view, it looked like the perfect spot. The first pass from high above looked great. We passed from the east side and got into some really bad winds. Manoeuvring to the west side found calmer winds and the passes started. After about the third pass we were close enough to feel that the winds were too strong and the area was not as flat as it first appeared, we moved on to train in another location where we made a successful landing and jumped out of the helicopter to take some pictures and take in the sites.

The second pilot to try his hand at landing in the mountains was Capt. Andrew Johnson. It was his first time flying in larger mountains and he seemed to be very comfortable and had us flying very close to the rocks. He scouted his landing location, made his passes and landed successfully.

The final location of landing was one where Maj. Alexia Hannam took the controls herself. It took me a few minutes to realize that she was actually going to land us on a tip of a mountain that didn’t look possible to land on. We did the passes and all around the small landing location were the long, steep walls of the mountain.

As Maj. Hannam did her passes, Cpl. Devost was scoping out the area and giving feedback on what he could see from his vantage point out the side door. When both of them agreed it was going to be a good place to land, or as they call it, ‘An approach with the option to land’ so that they don’t get convinced to land at a spot when they should abort the mission, they started the passes.

We were getting closer and closer to the landing spot. Cpl. Devost slid open the door to the helicopter and I was blessed with the most amazing view, wide open right in front of me. Closer and closer we stepped toward our target. Maj. Hannam at the front controlling the helicopter with Cpl. Devost in the back, laying on the floor of the helicopter looking underneath and calling out how many feet remained before touch down. It was exhilarating as I watched out the side and could see straight down the mountain. I am pretty sure I held my breath for most of it.

We landed one skid on the ground because the area wasn’t large enough to put both skids down. Then the wind picked up and suddenly we were flying vertical, safe and sound, and with an experience I will never forget.

To round out our trip, we did a search and rescue training in an area where a civilian search had just ended. We didn’t spot anything, but we did have MCpl. Brendan Collins on board as a Medical Technician who can be hoisted down to a rescue. When a Med Tech is on board, they have a call sign of “Joker”and they use “Jester” without a Med Tech for Air Traffic Control to know if the team is fully equipped.