Leonardo has announced that the first of 16 AW101 all-weather search and rescue (SAR) helicopters has been delivered to the Norwegian Ministry of Justice & Public Security. 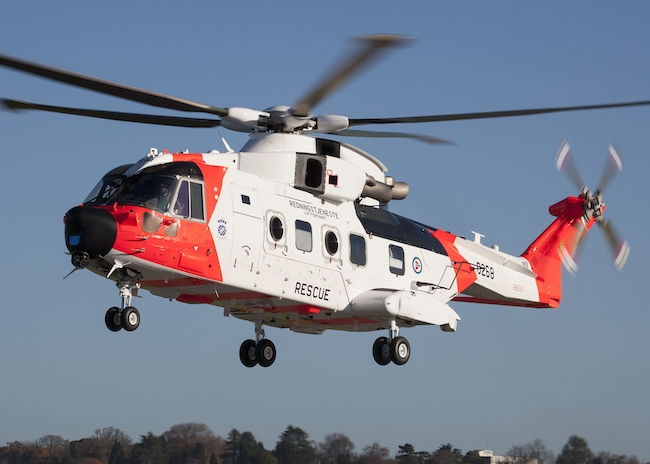 The aircraft departed Leonardo’s Yeovil facility on November 17 for Sola Air Base in southern Norway where the aircraft will enter a period of Operational Test & Evaluation (OT&E) before entering service with the Royal Norwegian Air Force in 2018. Aircraft deliveries will continue through to 2020 with SAR operations being established with the aircraft deployed across each of the six main operating bases.

Bjørn Ivar Aarseth NAWSARH Project Manager, Ministry of Justice & Public Security said: “The delivery of the first aircraft marks a major milestone for the Norwegian All-Weather Search and Rescue Helicopter programme and everyone is delighted to see the first AW101 in Norway. I would like to congratulate my team in the Ministry of Justice, key contributors within the Norwegian Defence sector, Leonardo and all other industry partners on achieving this milestone.”

Jon Clark, Leonardo’s program manager said: “The AW101 we have developed for Norway is undoubtedly the world’s most capable SAR helicopter and it is with great pride that we have delivered the first aircraft that will serve the people of Norway for decades to come. This contract is very much a long term partnership, consisting of industry, the Ministry of Justice & Public Security, the Royal Norwegian Air Force and the Norwegian Defence Materiel Agency, which has a common goal to deliver a SAR service second to none – we are all looking forward to the aircraft entering operational service in 2018.”

The AW101 benefits from three-engine safety, a full ice protection system for flight in known icing conditions, long range and endurance, a proven 30 minute “run dry” gearbox as well as multiple redundancy features in the avionic and mission systems. The large cabin doors and rear ramp provide easy access for personnel, survivors and equipment into the 27 m3 cabin which has standup head room throughout.

Leonardo is providing initial support and training services, including spares at each of the operating bases and has recently completed the aircrew training for the initial group of aircrew. It will then provide performance based logistic support to deliver approximately 90,000 flying hours across the fleet of 16 helicopters over the initial 15 year period.

An AW101 full flight simulator was commissioned in June 2017 at Sola Airport to provide in country training for aircrew in advance of aircraft deliveries and will be used by Norwegian aircrew and third parties to provide training that will both reduce training costs and improve safety by allowing crews to practice the full range of emergency procedures.