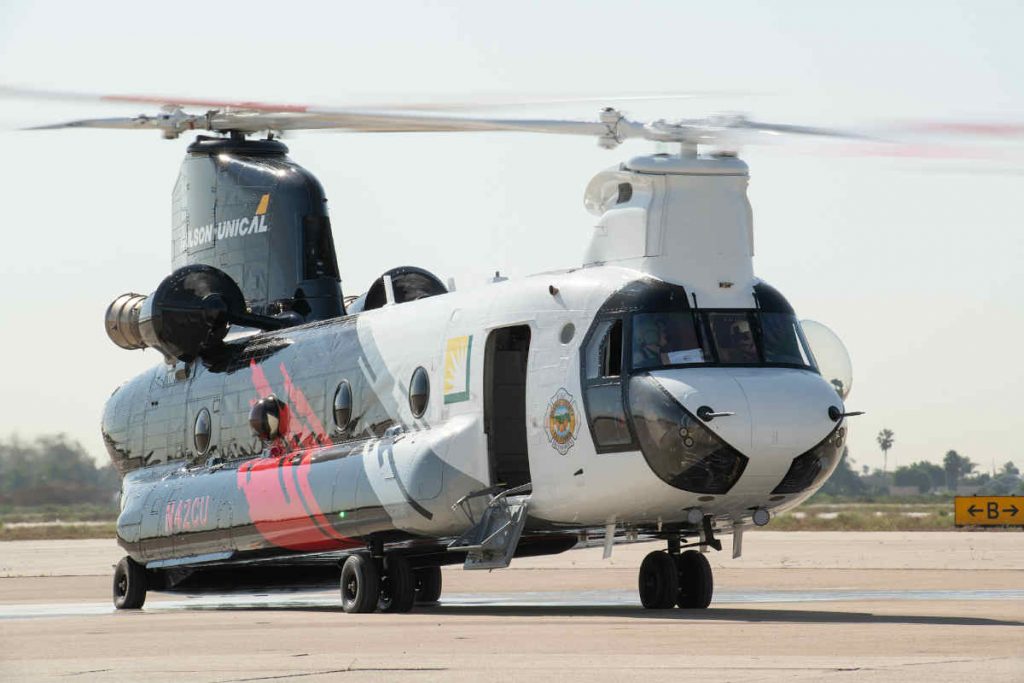 Captain Greg Barta of the Orange County Fire Authority has been on the front lines of firefighting for 13 years. He has one word to describe the 2020 fire season to date, “Explosive.”

“It’s definitely been demanding. There’s been quite a few fires simultaneously up and down the state… and we haven’t even had Santa Ana winds yet,” he said. “None of us are used to fighting fires during a pandemic, which is putting a strain on our resources, but we’re rising to the occasion. I speak for all firefighters when I say, this is the job we signed up to do.”

To help firefighters like Barta during an active fire season through year-end, Southern California Edison (SCE) is contributing about $2.2 million toward the Orange County Fire Authority’s (OCFA) lease of a Coulson-Unical CH-47 helitanker, beginning October 1 through late December.

The CH-47 Chinook helitanker is the world’s largest and most capable heavy-lift fire helicopter, able to drop 3,000 gallons of water or retardant in a single pass. The twin-engine, tandem rotor helicopter is being leased from and is operated by Coulson Aviation.

It will be based at the Joint Forces Training Base in Los Alamitos and be available around the clock. The helitanker will strengthen daytime and nighttime fire suppression within SCE’s 50,000-square-mile service area — and beyond, if needed.

“There is no higher priority for us than the safety of our customers, the communities we serve, our employees and contractors and the firefighters and first responders who protect them,” said Kevin Payne, president and CEO, SCE.

“The intensity of the 2020 wildfires so far, plus the impacts of the COVID-19 crisis, have put pressure on the state’s firefighting resources. With that in mind, it is a privilege for SCE to support the readiness of fire agencies such as the OCFA, which are on the front lines of protecting lives, property and critical infrastructure.”

SCE’s funding of the helitanker lease is part of its Wildfire Mitigation Plan, which also includes enhanced inspections of infrastructure, installing hundreds of miles of insulated power lines, vegetation management of thousands of trees and brush to maintain a minimum 12-foot clearance from power lines, as well as hundreds of fire-resistant poles, weather stations and high-definition cameras in high fire risk areas.

“The CH-47 Chinook helitanker is a force multiplier,” said Chief Brian Fennessy of OCFA. “We are extremely grateful to Southern California Edison for once again providing critical aerial support during the height of fire season.” Last year, SCE provided OCFA with funding for a 1,000-gallon capacity helitanker that assisted with about 20 wildfires.

For Capt. Barta describes the importance of support from the Coulson-Unical CH-47 helitanker as firefighters combat a record-breaking year for fires in California: “If we get in a situation where a fire’s behaviour changes and suddenly our teams are in harm’s way, having that helitanker up there to aid our firefighters is key. Being on the fire line and seeing that helitanker drop 3,000 gallons a minute, we know we are getting a difference-maker.”