Lockheed Martin’s intended acquisition of Sikorsky Helicopters will likely have little impact on Canadian aviation, civil or defence, in the long term. In the short run, it could mean further delays for the Royal Canadian Air Force’s aptly named Cyclone program’s twisted path just when deliveries of the CH-148 are beginning. 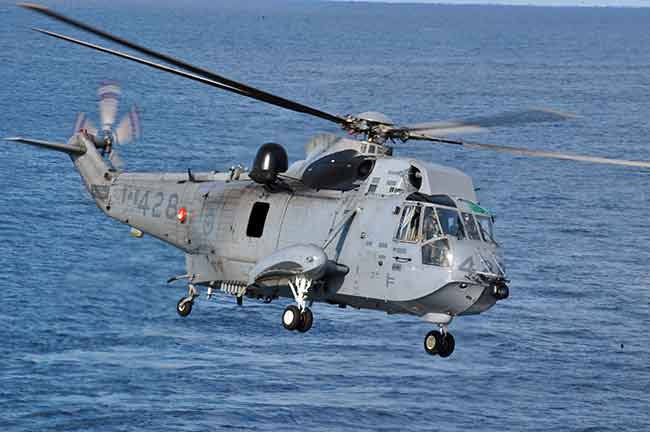 The RCAF’s 27 CH-124 Sikorsky Sea Kings have been in service since 1963. Lockheed Martin’s intended acquisition of Sikorsky Helicopters will likely have little impact on Canadian aviation

Sikorsky had already announced a workforce reduction scheme before United Technologies Corporation put the U.S. rotorcraft manufacturer up for auction. A Polish military contract, which failed to come through, triggered layoffs of nearly 10 per cent of its employees. And when the U.S.$9 billion ($11.6 billion Canadian) sale was announced in July, Lockheed Martin officials indicated they expected about $150 million in “synergies,” or code for further job cuts from duplication. So no surprise that Sikorsky’s 18,000 employees are going to be nervous for a while about takeover integration on top of restructure, and may not perform at peak production.

Few of those workers are in Canada. Sikorsky-owned Composite Technology has a small team in Winnipeg, Man., doing repair and modification of rotor blades, and Wisconsin-headquartered Derco Aerospace performs maintenance services for some Canadian military equipment in Abbotsford, B.C. Lockheed Martin Canada, which claims a business presence in the country since 1937, has more than 800 people supporting military combat systems and government information technology, including the Statistics Canada online census.

Marillyn Hewson, Lockheed Chairman, CEO and president, explained they’re buying at a time when Sikorsky’s financials have dropped due to lower revenue from commercial oil and gas customers. Chief financial officer Bruce Tanner added, “This is a long-term business. We’re not buying this business for the next three years. We’re buying for the next three decades.”

Bethesda, Md.-headquartered Lockheed (112,000 employees worldwide) hopes to wrap up the Sikorsky deal by the end of 2015 or early 2016 at the latest. First, it must pass muster with U.S. Department of Defense and Department of Justice antitrust regulators, which is not necessarily automatic. As recently as this spring, for example, the DOJ was reportedly prepared to block the merger of cable television giants Comcast and Time Warner (which the two companies subsequently called off). In 1998, Lockheed Martin abandoned its planned $8.3 billion acquisition of Northrop Grumman when the government opposed it. In effect, the DOD has unofficially ruled out mergers among the top five American defence contractors (Lockheed, Boeing, General Dynamics, Raytheon, Northrop Grumman).

Indeed, prior to his confirmation as U.S. Secretary of Defense, Ashton Carter told the Senate Armed Services Committee: “I believe the government must be alert for consolidations that eliminate competition.”

“I think this Pentagon is going to take a real and serious look at this,” said Jeff Bialos, a partner in the American law firm of Sutherland Asbill & Brennan who previously served as the U.S. Deputy Under Secretary of Defense for Industrial Affairs. “I don’t ascribe to the view that it’s ‘green-lighted.’ Antitrust is an area where the facts matter. You can’t get the answer to this deal until you delve into the facts at length.”

Sikorsky accounts for two-thirds of the Pentagon’s helicopter spending, and could lead the U.S. to examine its reliance on Lockheed, which is also responsible for the troubled, expensive F-35, aka the Joint Strike Fighter. The F-35 Lightning II is also Canada’s most significant fixed-wing procurement; for the moment, the intent to purchase 65 of the fifth-generation fighters at a cost of about $16 billion is on hold until after the October federal elections.

Dr. Loren Thompson, chief operating officer of the non-profit (but defense contractor-funded) Lexington Institute think tank, stated, “The Sikorsky transaction is probably the biggest domestic defense acquisition that Lockheed Martin could have accomplished without running afoul of regulators. Because Lockheed Martin does not currently assemble rotorcraft, adding Sikorsky to its holdings would not materially increase concentration in any particular segment of the domestic defense market.”

“If you read between the lines, it’s not that they make helicopters. It’s that they make military helicopters,” said Mike Blades, an analyst with Frost & Sullivan. “Sikorsky may have steady sales; it won’t show huge growth.” According to the Teal Group consulting firm, military rotorcraft saw a 7.9 per cent compound annual growth rate between 2004 and 2013, with an unheard of 66 per cent jump from 2008-2012. That unsustainable growth has slowed and is projected to continue to decline. The commercial helicopter market had been on an upswing, but has stalled recently with plummeting oil prices.

A significant factor in the appeal of Sikorsky to Lockheed Martin is its post-production support of fielded helicopters, especially thousands of H-60 Black Hawk variants. The aftermarket business generates a continuous stream of revenues for spare parts, mission equipment, overhauls, and maintenance.

Lockheed plans to align Sikorsky under its Mission Systems and Training business segment.

Cyclone – Not Sikorsky’s Flagship
Canadian defence officials certainly hope the Lockheed-Sikorsky integration won’t negatively impact the long-suffering Maritime Helicopter Project. After all, the RCAF just took delivery of the first six of 28 planned CH-148 aircraft. It only took 11 years to get those – the original contract was awarded to Sikorsky in 2004.

But wait. The delivered Cyclones are not fully ready for prime time. They already need an upgrade. Department of National Defence spokesman Dan Le Bouthillier said the General Electric CT7-8A7 engines are a tad underpowered for some missions, such as high-density altitudes in hot conditions. “Sikorsky is designing improvements to the engines to increase their power output for very few circumstances,” Le Bouthillier said. And while they’re at it, they’ll also install improved self-protection systems, mission systems, and communications, plus upgrade tactical displays.

The first fully capable CH-148 Cyclone? 2018. All 28? By 2021, according to current Minister of Defence Jason Kenney – 17 years after the S-92 variant was chosen to replace the RCAF’s Sea Kings for submarine warfare, surveillance, and search-and-rescue (SAR) missions from Royal Canadian Navy warships. The CH-148 will also provide some tactical transport.

Peter MacKay, former Defence Minister and current Minister of Justice, tagged the Maritime Helicopter Project as “the worst procurement in the history of Canada.” The program actually traces to 1986 under the name New Shipborne Aircraft Project. The Progressive Conservatives selected the EH-101 and signed a
contract with AgustaWestland; when the Liberal party came to power, the contract was cancelled (at an estimated cost of $500 million Canadian).

After the procurement re-started, the Sikorsky-led team (which also includes General Dynamics Canada and L-3) was awarded the contract in November 2004. The first flight took place in 2008. But in 2010, Sikorsky announced a replacement engine promising 10 per cent more horsepower (the engine that turned out to not be quite sufficient). The U.S. government added some export restrictions. And by 2013, deliveries of “interim” aircraft lacking certain “mission critical” systems were rejected by the Canadian government, and they announced they were re-evaluating the program. An independent third party was engaged to review and assess the project’s viability.

The following year, the 30-minute run-dry main gearbox – defined as mandatory in the original Request for Quote – was deleted from the specification. (Oil loss in the main gearbox, followed by several other factors, caused the 2009 crash of a Cougar Helicopters civil S-92 off the coast of Newfoundland in which 17 persons died.) Sikorsky is also having issues with the design of a gear box rod for U.S. Marine Corps CH-53K helicopters.

The original pair of Cyclone contracts totalled $5 billion Canadian – $1.8 billion for acquisition of the 28 aircraft and $3.2 billion for 20 years of in-service support, including a training facility. The total value of the CH-148 project is now $7.6 billion – $1.9 billion for development and production and $5.7 billion contractor support. Reportedly, Sikorsky has been fined hundreds of millions of dollars for delays.

The RCAF’s 27 CH-124 Sikorsky Sea Kings, the oldest aircraft in the inventory, have been in service since 1963.

Other Irons in the Fire
Prior to the acquisition announcement, Lockheed Martin and Sikorsky were already partnered on multiple large military helicopter contracts – a new SAR helicopter for the U.S. Air Force and a $2 billion contract to repair, overhaul, and modify more than 1,700 U.S. Navy Sea Hawk helicopters. Sikorsky is actually ahead of schedule on its $3.5 billion deal to build a Marine One replacement helicopter fleet of 23 VXX Marine Ones for the White House; Lockheed is a supplier for some of the aircraft systems.

Several years ago, Sikorsky and Lockheed successfully challenged a US$8 billion contract award to Boeing for 112 rescue helicopters.

By acquiring Sikorsky, Lockheed is virtually assured of being on the winning team for the U.S. Army’s 2018 Future Vertical Lift (FLV) competition to produce aircraft that can take off like a helicopter and cruise at far faster speeds than today’s utility helicopters. The Pentagon sees the winning FLV aircraft as the replacement for not just Sikorsky’s Black Hawk and Seahawk, but also for the Boeing AH-64 Apache attack helicopter and CH-47 Chinook cargo helicopter, as well as Bell Helicopter’s OH-58 Kiowa scout. Sikorsky is partnered with Boeing in the FLV fly-off, competing against Textron’s Bell, whose team is bidding cockpit, avionics, and other systems from Lockheed.

Hewson indicated Lockheed will remain on the Bell team, working together on the V-280 Valor tilt-rotor aircraft.

The Sikorsky-Boeing FLV bird, known as the SB1-Defiant, is derived from Sikorsky’s Collier Trophy-winning X2 experimental aircraft which set an unofficial speed record at about 300 miles an hour. Sikorsky president Robert LeDuc said at the Paris Air Show in June: “We’re actually demonstrating high speed, not just talking about it. It also will give us maneuverability up to two “Gs” which is about double what any helicopter today can do.”

The X2 and its offspring S-97 Raider, which had its first flight in May, feature two coaxial counter-rotating main rotors and a rear-mounted pusher propeller to provide cruise speeds up to 240 knots (276 mph). The Raider is capable of a multi-mission configuration to carry six troops and external weapons for armed reconnaissance, light assault, light attack, and special operations. The second prototype is expected to be assembled by year-end and ready for a demonstration tour in 2016. Sikorsky maintains the S-97 will offer “a game-changing combination of maneuverability, hover ability, range, speed, endurance, and survivability.”

The iconic inventor Igor Sikorsky, who began experimenting with vertical-lift aircraft in his native Russia more than a century ago, of course, started Sikorsky, in 1925 in New York. In 1939, his VS-300 – “the world’s first practical single main rotor helicopter,” according to the company – made its inaugural flight.

The first helicopters in the Royal Canadian Air Force were Sikorsky S-51s, designated the H-5. They were used after World War II for experimentation and training at RCAF Trenton, Ont. until their transfer in 1948 to Edmonton, Alberta for K Flight SAR work. All seven H-5s were retired by the mid-1960s.