Sikorsky delivered the first CH-53 King Stallion helicopter to the U.S. Marine Corps (USMC) on Wednesday. The aircraft is the first of an expected 200 helicopters for the Marine Corps' fleet. 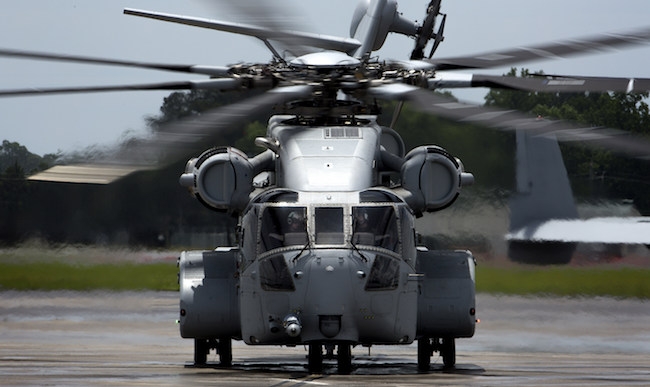 “Our first delivery of a CH-53K to the Marine Corps marks the start of a new generation of true heavy lift helicopter deliveries by Sikorsky that bring unsurpassed and expanded capability across the modern battlefield to provide tremendous mission flexibility and efficiency in delivering combat power, humanitarian assistance or disaster relief for those in need,” said Dan Schultz, Sikorsky President and former CH-53 pilot. “With 18 additional aircraft in various stages of production already, the entire Sikorsky team, in partnership with our suppliers, is looking forward to additional deliveries to delight our customer.”

There the helicopter enters into the Supportability Test Plan. U.S. Marines will conduct a logistics assessment on the maintenance, sustainment and overall aviation logistics support of the King Stallion. This assessment also will validate maintenance procedures with Marine Corps maintainers conducting hands-on care/upkeep of the aircraft. The Supportability Test Plan will ensure readiness and support on the flightline when CH-53K helicopters enter into service with the USMC.

Sikorsky expects to deliver its second CH-53K helicopter to the USMC in early 2019.

“I am very proud of the work accomplished to deliver the most powerful helicopter ever designed into the hands of our Marines,” Lt. Gen. Steven Rudder, Deputy Commandant for Aviation, said. “And confident in the teamwork and dedication in this program which will carry us to IOC (Initial Operational Capability) next year.”

Sikorsky is preparing its manufacturing facility in Stratford, Connecticut, to house CH-53K production beginning this summer.

The heavy lift helicopter made its international debut and showcased its maneuverability and advanced fly-by-wire technology during demonstration flights at the recent ILA Berlin Air Show in Berlin, Germany.