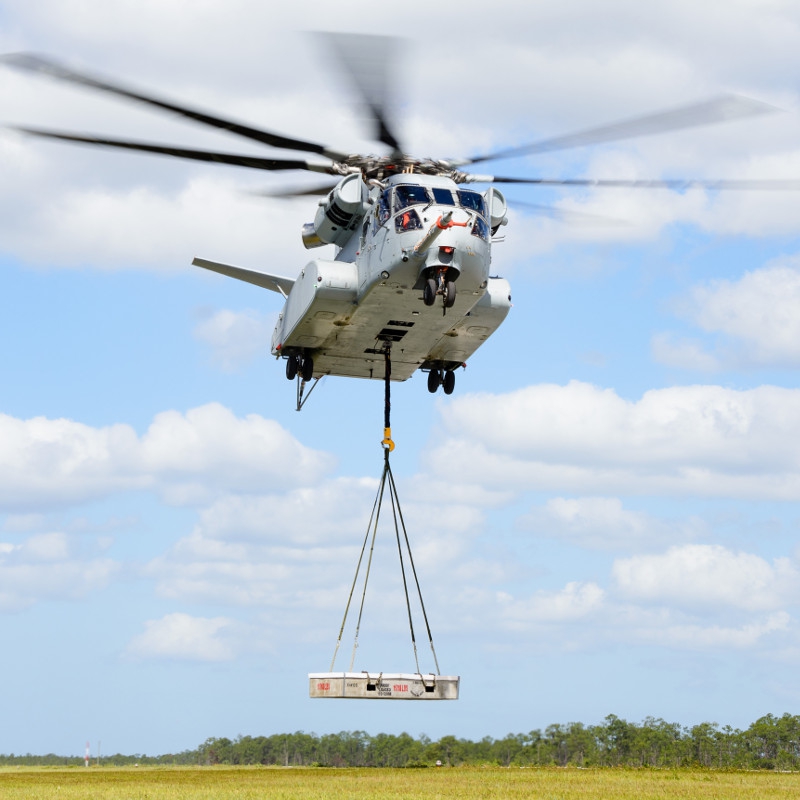 The first two CH-53K heavy lift helicopters achieved their first flights on October 27, 2015, and January 22, 2016, respectively. To date these helicopters have achieved over 50 flight hours combined including one flight at speeds over 140 knots.   The third and fourth King Stallion aircraft will join the flight test program this summer.

As the King Stallion flight test program proceeds, both of the current flying aircraft will be exercised to expand the external load envelope. Initial external payloads weighing 12,000 pounds will be flown first in hover and then incrementally to speeds up to 120 knots.  The aircraft will then carry 20,000 and 27,000 pound external payloads.

The CH-53K King Stallion is equipped with single, dual and triple external cargo hook capability that will allow for the transfer of three independent external loads to three separate landing zones in support of distributed operations in one single sortie without having to return to a ship or other logistical hub.  The three external cargo hooks include a single centre point hook with a 36,000 lb. capability and dual-point hooks each capable of carrying up to 25,200 lbs. The system features an electrical load release capability from the cockpit and cabin, and a mechanical load release capability at each of the pendant locations.  An auto-jettison system is incorporated to protect the aircraft in the event of a load attachment point failure.

“It is exciting to have achieved our first external lift, another important step towards fielding the most powerful U.S. military helicopter,” said Col. Hank Vanderborght, U.S. Marine Corps Program Manager for Heavy Lift Helicopters. “Our program continues on pace to deploy this incredible heavy lift capability to our warfighters.

Sikorsky Aircraft, a Lockheed Martin company, is developing the CH-53K King Stallion heavy lift helicopter for the U.S. Marine Corps. The King Stallion maintains similar physical dimensions and “footprint” as its predecessor, the three-engine CH-53E SUPER STALLION helicopter, but will more than triple the payload to 27,000 pounds over 110 nautical miles under “high hot” ambient conditions.

The U.S. Department of Defense’s Program of Record remains at 200 CH-53K aircraft. The Marine Corps intends to stand up eight active duty squadrons, one training squadron, and one reserve squadron to support operational requirements.