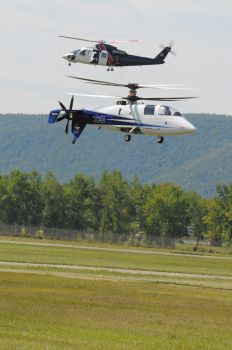 “Today’s achievement is the result of dedicated effort by the entire X2 TECHNOLOGY Demonstrator Program Team,” said James Kagdis, Program Manager, Advanced Programs. ”It is proof of the complete commitment by Sikorsky Aircraft to this program and to the exploration of innovation in aviation.  We look forward to expanding the flight envelope for this Demonstrator and will continue to conduct market analysis to determine the next steps for this important program.”

The X2 TECHNOLOGY Demonstrator is designed to establish that a helicopter can cruise comfortably at 250 knots, while retaining such desirable helicopter attributes as excellent low speed handling, efficient hovering, and safe autorotation, combined with a seamless and simple transition to high speed.

”X2 TECHNOLOGY has crossed a major threshold,” Pino said. “The team’s achievement sets the stage for the next series of tests eventually leading to maximum speed. It also sparks the imagination for what ultimately the technology can mean to the future of the rotorcraft industry. We are far from having a product, but closer than ever to realizing the potential.”

Among the innovative technologies the X2 TECHNOLOGY Demonstrator employs are:

Sikorsky Aircraft first announced the initiative to develop an integrated suite of technologies called X2 TECHNOLOGY in June 2005. The project is funded solely by Sikorsky. The X2 TECHNOLOGY Demonstrator Program Manager is Steve Chisarik, and Director of Engineering Sciences for Sikorsky is Steve Weiner.

Key suppliers for the X2 TECHNOLOGY Demonstrator are:

Sikorsky Aircraft Corp., based in Stratford, Conn., is a world leader in helicopter design, manufacture, and service. The company’s long commitment to safety and innovation is reflected in its mission statement: “We pioneer flight solutions that bring people home everywhere … every time™.“ United Technologies Corp., based in Hartford, Conn., provides a broad range of high-technology products and support services to the aerospace and building systems industries.