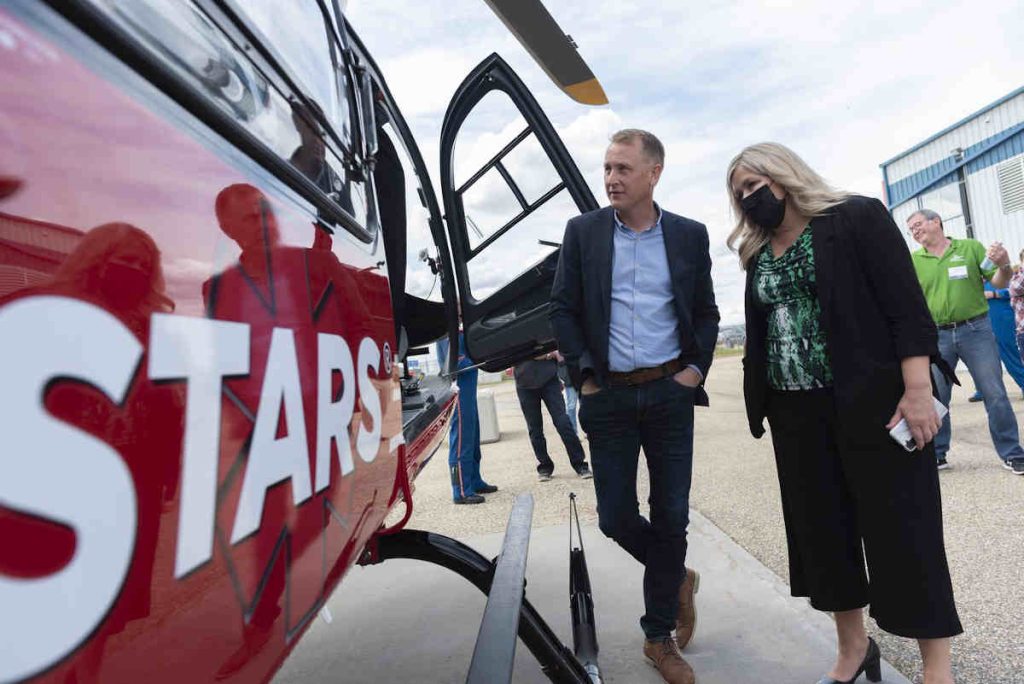 STARS welcomed its new H145 helicopter to the STARS base in Grande Prairie last Wednesday, May 25.

The $13 million aircraft is part of the STARS fleet renewal replacing the previous BK117 and AW139 aircraft.

The event was attended by over 100 people and included many local leaders, EMS personnel, and STARS’ previous patients and crew.

“If you try to compare that we were driving a vehicle that’s almost 40 years old compared to what we would have available to us today, then you know the significant technology and the safety features are leaps and bounds from what we previously had,” said Glenda Farnden, STARS senior municipal relations liaison.

“This machine is going to really take us forward for many generations to come,” she said.

Some residents may have seen the new red helicopter in the sky above for the past month, as it has been actively helping patients in the area since last week and has been training with a crew in Grande Prairie over the last few months.

“These new aircraft are an investment in our ability to serve the people of Grande Prairie and region for decades to come, and we’re incredibly grateful to the community for helping us reach our goal,” said STARS president and CEO Andrea Robertson.

She noted that parts have become costly and harder to find with the aging helicopters.

“The bulk of our aging fleet is no longer being built and is becoming costlier to maintain,” she said.

“I am thankful for STARS, and I know that every family that has been impacted by a life-changing tragedy is thankful when STARS shows up,” said Chris Warkentin, Grande Prairie—Mackenzie MP.

He said it was essential to continue to raise money and awareness of STARS “because we care about the person who takes for granted today, the person who doesn’t know that they will need it tomorrow.”

Farnden says the new helicopter has been a long time coming, with the fleet campaign taking off in Grande Prairie in September 2019.

“The September 2019 kickoff really did help to engage all of our local municipalities as well as our local oil and gas sector industry and lots of individuals,” she said.

She noted that Birchcliff Energy donated $2 million to STARS, with $1.5 million going toward the new helicopter.

Local municipalities have also made contributions to STAR and the new ambulance.

The Town of Sexsmith donates $2 per capita in the town equaling about $5420 per year, and in Sept. 2021 the town donated an additional $5,000 towards the new helicopter.