Canadian helicopter maintenance repair and overhaul has always enjoyed a built in advantage of being based in a country that is one of the heaviest users of helicopters in the world in some of the world’s harshest environments. 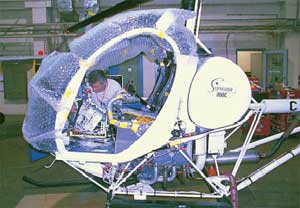 Canadian helicopter maintenance repair and overhaul has always enjoyed
a built in advantage of being based in a country that is one of the
heaviest users of helicopters in the world in some of the world’s
harshest environments. Despite a rash of consolidations the industry
appears to be as competitive as ever, and has managed to side step the
cyclical peaks and valleys that have proven to be problematic for many
fixed wing shops. At the same time, the industry is carving out new
growth opportunities in composites overhaul while solidifying gains in
markets such as gas turbine MRO.

“Two
areas that have developed into strong niche markets for Canada are gas
turbine overhaul and composites,” said Steve Dick, CEO of the
Ottawa-based Canadian Aircraft Maintenance Council (CAMC). “We have
become a world leader in gas turbine MRO, while composites overhaul
seems to be growing quite steady. It is certainly a sector to keep an
eye on.”

The recent ‘corporatization’ and consolidation of the
aftermarket industry has certainly helped to place Canadian MRO on the
map. “We are cementing our position in gas turbines,” explained Mark
Dobbin, chairman/CEO of Vector Aerospace. “We have always had the
capability and a broad range of products and services. Market trends
and globalization of the industry are allowing Canada to capitalize on
that outside our borders.” Vector provides extensive rotary-wing MRO
through facilities in Canada, the UK and UK.

The advantages of
Canadian MRO – especially for US and international operators – are
readily apparent: a skilled and reliable workforce, dependable
turn-around times and a low dollar, although some would argue that a
favourable currency exchange is highly overrated in the success of the
industry given that parts are priced in US dollars and domestic labour
accounts for no more than 20% of an invoice. “What I find about
Canadian helicopter services is that we are so good at it, it is almost
important to compete with Canadian pricing,” one service centre
operator said.

Steve Dick, CEO of the Ottawabased Canadian
Aircraft Maintenance Council (CAMC) believes that while a low dollar
has helped in the past, operators are looking beyond currency. “Quality
seems to be what is driving a lot of business into Canada. Companies
are investing in new techniques to perform high quality repairs, and
clients have been impressed.”

It is a point that shared by
Emeric d'Arcimoles, president/CEO of Turbomeca worldwide. Prior to the
opening of Turbomeca Canada, d'Arcimoles told HELICOPTERS that, “we
never gamble on local currency when setting up a subsidiary.”

Still,
Approved Maintenance Organizations (AMOs) cannot afford to become
complacent in a global market. The flip side of a stronger dollar is
new pressure to increase labour productivity in order to maintain a
competitive position. There are signs that such pressure is already
taking place as respected MROs such as ST Aerospace in Singapore are
slashing labour rates. The next competitive frontier may be Mexico…