Features
Superheroes of the sky 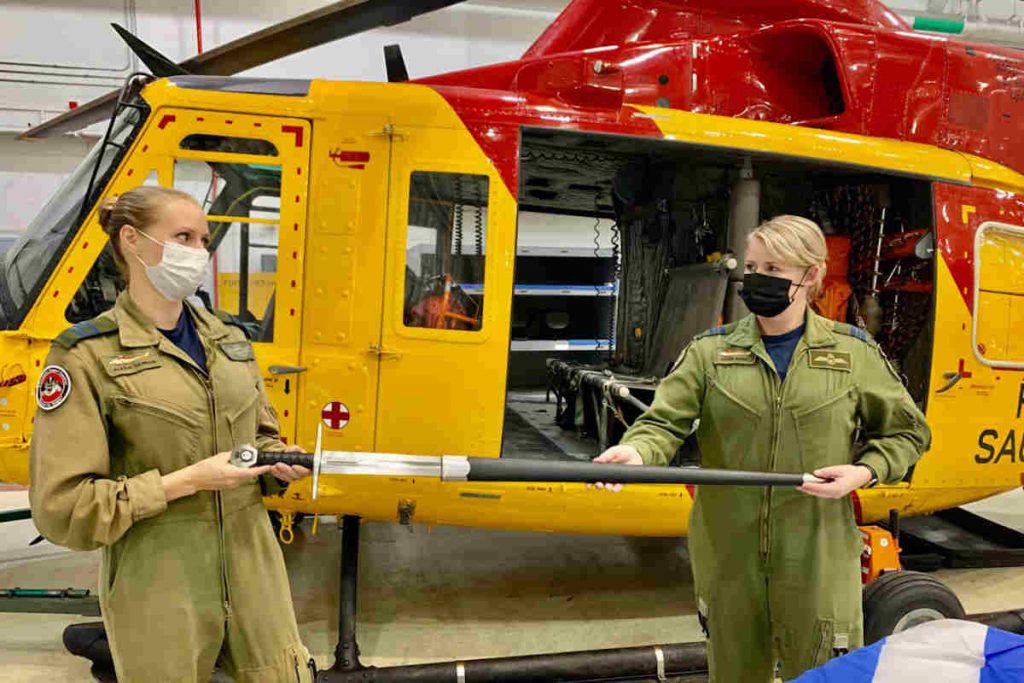 When I think of superheroes, I think of men and women in capes darting across the sky, using their powers for good – dedicated to protecting the public and saving people from impending doom. Replace the capes with uniforms and you can find real-life superheroes flying around Canadian skies, ready at a moment’s notice to come to our rescue.

I recently participated a in training exercise and Change of Command with 417 Combat Support Squadron in 4 Wing Cold Lake in Alberta. Exercises are performed at full speed by this search and rescue squadron, because the team must be ready at a moment’s notice. It can make all of the difference between life and death.

Immediately upon arriving at the Cold Lake hangar, I was whisked away on a quad by Med Tech S1 Andrew Cleveland. Along with two students (future flight engineers, Cpl KC Frigon and Cpl Brandon Barlow), we set up an accident scene as soon as we arrived at ground zero. The scenario involved a quadding accident in which Frigon feigned a broken leg. Then we waited.

It wasn’t long before we heard the sound of rotary blades thumping air in the distance. After a quick lesson on how to set off a flare, I shot one into the sky to signal our whereabouts to CH-146 Griffon. Suddenly over the treetops, the distinct yellow and red helicopter appeared for our rescue. It was easy to imagine how the sight of the Griffon would bring relief to victims at an accident scene.

Maj Alexia Hannam and Capt Matt Comeau were, at the controls of the helicopter. Flight engineer Cpl Aaron Devost was at his regular spot, confidently riding in the open side door to guide the helicopter to the scene below for hoisting a Med Tech or any injured people. Med Tech PO2 Dan Lavoie was ready to spring into action, to be hoisted down if necessary, and secure safety of the victims.

As I watched the helicopter moved above us, I admittedly felt a wave of warmth for this mission to be taking place on such a beautiful fall day. It felt as if I was in a magical world with colourful leaves dancing around us and above an amazing machine settling into a hover. But I soon took notice of the superheros again and wondered how difficult their mission would be in temperatures well below zero with poor visibility. PO2 Lavoie was being lowered from the helicopter with a stretcher right behind. He quickly assessed the situation to determine who needed medical attention first, swiftly wrapping the wound and moving our patient onto the stretcher.

Once the patient care was complete, the ground portion of the exercise ended and the Med Tech was lifted up to the helicopter. At that point, as a guest patient, I was also secured in a harness, attached to the hoist and swiftly pulled off the ground toward the sky. I looked up at and marveled at the body of the beast hovering right above me… Up, up, up I went. The wind whipping around me, feeling more alive than I have in a long time.

When I reached the helicopter I was happy to see Cpl Devost ready to pull me into safety. This is not the first time I had the privilege to fly with him and it was comforting to see his familiar face… or should I say helmet. The success of this mission depended on the entire team, including the pilots whose flying skills are rivaled by none, the flight engineer serving as mission quarterback, the Med or SAR Techs ready to jump into the most severe conditions, the maintainers who ensure that aircraft is safe for flight, and the logistical and command team who oversee the entire operation.

After a mystical ride over a winding river, with the sun shining down on us and an autumn forest dressed to match our ride, we arrived back at the hangar for the Change of Command presentation.

The ceremony was unique because of the pandemic, but it was a special day for outgoing Maj Hannam and incoming Maj Eileen Sudul. Although the official Change of Command occurred in March, the two pilots were finally able to get together with some members of 417 Squadron.

The 417 is a relatively small squadron, but their efforts should not go unnoticed. These skilled military members do not shy away from their duty. They have rescued kayakers and snowmobilers, searched for survivors amid forest fires, among a range of missions that are always risky, in addition to their primary duty to provide rapid SAR response for all military aircraft in Cold Lake. What these people do on an daily basis is remarkable, dangerous and always with the intent to serve others. They truly deserve superhero status.