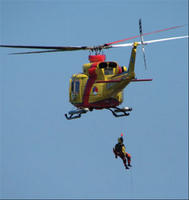 Search and Rescue (SAR) includes two quite separate types of
operations. The first is strictly a military mission which demands
potential flights into hostile areas – generally in times of war or
during peacekeeping operations – where enemy fire might be encountered.
The second type involves supporting the general public in non-combat
situations. This might include rescuing the crews of overturned boats,
highway catastrophes, flood relief, earthquake victim assistance or
aircraft crashes – to name only a few. During civilian emergencies,
military SAR agencies can be hopelessly overwhelmed – Hurricane Katrina
and the devastation in New Orleans is a poignant example. In that
instance, ineffective coordination and the overwhelmed leadership
failed in epic magnitude. When military personnel were eventually
allowed in the area they couldn’t hope to meet the demand for
humanitarian aid.

Meanwhile,
civilian helicopter agencies were forced to sit on the periphery while
humanity suffered. With all due respect to our military, the Civil Air
Search and Rescue Association (CASARA) and various emergency measures
agencies, a future major disaster in Canada could result in horrendous
loss of life – partially because our total SAR resources will be
woefully inadequate. (Similar to the US which contains more than ten
time the assets we have – and they were woefully inadequate in
Louisiana.)

We have exotic new SAR helicopters, but they are
having mechanical teething problems such that the Trenton Rescue
Coordination Centre (RCC) commanding officer has given away his new
Cormorants and saddled up with Bell 412 Griffons – similar to the
machines many civilians operate. In time, perhaps years, our term as
Cormorant Guinea Pigs will end and they will provide a dependable
offshore capability – but when?

Meanwhile,
our 3.9-million-square-mile country continues to harbour large areas
with inadequate SAR coverage. Captain Stu Robertson of the Victoria RCC
advises there are combat helicopters at Cold Lake, Goose Bay and
Bagotville that can be assigned for SAR missions – but this isn’t their
primary duty and they may not be available at critical times. Also,
there’s a smattering of fixed-wing assets that include Buffaloes from
Comox and Hercules from Winnipeg, Greenwood and Trenton. Additionally,
RCC personnel mention the Aurora patrol aircraft on the coasts that can
serve as superb communications aircraft with their radar and forward
looking infrared (FLIR) providing augmented search capabilities and
their fuselage full of operators able to control local traffic and
assets.

However, there are many functions these fixed-wing
aircraft are incapable of providing and it can take a military SAR
helicopter days to reach a rescue location. Major Chuck Grenkow of RCC
points out that occasional hire of civilian commercial operators is
possible, but not very common. He mentions that in the case of
Whitehorse, a local fixed-wing operator occassionally straps on
Direction Finding (DF) equipment and a CASARA crew boards the aircraft
to provide SAR guidance. While these civilian pilots are not
SAR-trained the qualified CASARA observers provide operational
direction to accomplish the goal.

Our dozens of commercial
helicopter operators scattered throughout Canada could potentially
provide help on SAR missions and help fill in the large geographical
SAR gaps. Having served in the military on SAR missions, I can relate
that RCCs aren’t always keen to employ civilian operators for search
missions as most civilian pilots and crews are not trained in the
applicable procedures. Moreover, untrained civilian aircrews can get in
the way or inadequately search an area. These issues could be resolved
in two ways. First, chopper operators could employ local CASARA
personnel with DF equipment, and/or they could take SAR training at the
Comox OTF where military crews train.

Major
Grenkow asks: who will pay for the training, what readiness state would
the commercial operators provide and what would their standards and
requirements be for maintaining SAR equipment? Other questions might
include the need or desire to be equipped with radar or FLIR equipment;
however, this likely isn’t necessary for most missions as high-flying,
fast, fixed-wing assets can work jointly with commercial helicopters
once the infrastructure is put in place.

These questions will
seem unimportant to someone critically injured in a remote bush camp or
in a charter plane that goes down in the muskeg 100 miles from a
settlement. In these cases time is of the essence and a ten-hour ferry
flight, even by a 150-knot military SAR helicopter, often won’t arrive
in time to save critically injured accident victims. The US has
launched a successful cooperative effort in northern Alaska. A civilian
operator, North Slope Borough SAR, operates fixed- and rotary-wing
aircraft and has been active in SAR missions and lauded for their
efforts.

WHAT CAN CIVILIAN COMMERCIAL OPERATORS OFFER?

Having
worked both sides of the fence in civilian and military roles, there
are pros and cons with each institution. Charter companies do not have
the horrendous overhead associated with a military SAR helicopter
squadron such as 442 in Comox with a very large staff supporting
extremely expensive helicopters that require many hours of maintenance
for each hour they fly. Captains of the medium and large civilian
helicopters that would typically see SAR missions tend to be more
experienced in handling their equipment and much more capable in
marginal VFR weather than military drivers. The military may be able to
fly IFR to a search area but with marginal weather below, they often
wouldn’t be able to effect a rescue since their VFR limits are 300 feet
and one mile visibility. However, most civilian helicopters manned by
pilots typically familiar with the local area would likely have no
problem with marginal VFR weather – local area knowledge is an
invaluable asset.

Moreover, close proximity to a local rescue
requirement allows the commercial pilot to launch quickly before
inclement weather might shut down the search area or launch as soon as
it lifts adequately, while a military SAR helicopter may be pinned down
by weather many hours distant. Also, the difference in direct operating
costs of a Cormorant vs. a Bell 212 are vast. A local area helicopter
would not only be cheaper by the hour but also require far fewer hours
to reach the rescue site. And an operator may well have a fleet of
helicopters of varying sizes suitable to fit the need. Why launch a
Bell 214ST to rescue one overdue, freezing trapper with a broken Skidoo
when a Jetranger will serve? (From a true story of a recent Alaskan
SAR.)

Typically, the CF is discarding helicopters such as the
Sea Kings and Labradors for new but unproven equipment and continues to
accept the yoke of high unserviceability. They also sold our Chinooks
for a pittance and have now decided they need similar helicopters back
in the inventory. On the flip side, the Americans put a couple of
million dollars into their heavy-lift CH- 46s (Labrador equivalent) and
continue to reap the cost savings. Mind you, civilian operators are
lusting after the military rejects and will steal them from the
taxpayers for a song and operate them virtually trouble-free for
decades. My point? Commercial operators have proven they can operate
more cost-effectively, with higher reliability for flight dispatch and
in this class of helicopter with crews that are more capable of
handling the challenges of flight in remote locations.

The
bottom line generally refers to who will pay and how much. It is
suggested here that we think in terms of human lives and minimizing
human agony – while reducing costs. While many others should be
involved in future discussions and decisions, I suggest the politicians
open the CF training program at Comox to commercial operators. The
former federal government entities should financially support the
BC-based indoctrination for pilots and observers and companies
operating in the sparsely settled areas, and other centres that wish to
take the training would pay their own way to the school. Perhaps,
facilities permitting, the Comox base could provide food and lodging at
a modest fee to help promote the program – although many operators
might prefer to use local commercial amenities. After pilot training, a
close link-up with CASARA personnel and local commercial operators
would provide the teamwork necessary for successful searches.

We’ll
gain an emergency asset that benefits the speedy salvation of victims,
reduced operating costs for the military and taxpayers and provide
improved SAR coverage in remote areas. A side benefit evolves from
greater peace of mind for those of us who venture into the hinterlands.
Additionally, commercial operators can benefit from another revenue
source and taxpayers could expect to see reduced costs for SAR.