Any day now – perhaps already by the time you read this – Boeing Aerospace expects to finally get a formal Request for Proposal (RFP) which should lead to the Canadian Forces finally getting new medium-to-heavy lift helicopters. 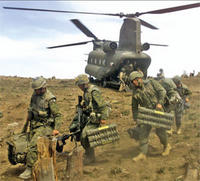 Any day now – perhaps already by the time you read this – Boeing
Aerospace expects to finally get a formal Request for Proposal (RFP)
which should lead to the Canadian Forces finally getting new
medium-toheavy lift helicopters.

The
aircraft of choice is Boeing’s tried-and-true Chinook. It’s by far the
only platform capable of meeting a demanding array of operational
requirements in support of land, amphibious and special operations
forces. In addition to giving the Canadian Forces the capability of
rapidly, efficiently and securely moving large numbers of personnel and
heavy equipment from forward-deployed bases abroad, they will be a
valuable tool for dealing with civil disasters at home.

As
outlined by Defence Minister Gordon O'Connor and the Chief of the
Defence Staff, Gen Rick Hillier, the estimated cost of 16 of the big
tandem-rotor aircraft is about $2 billion while a 20- year support
program is expected to cost $2.7 billion.

“This government’s new
Canada First Defence Strategy promises to rebuild the Canadian Forces,
which had been underfunded, undermanned and underequipped for more than
a decade,” O’Connor said. Hillier said the “new capability will allow
our troops to deploy into isolated areas in effective numbers, without
relying on our allies.”

The latter point is more about
practicability than pride. The CF mandate to contribute to global peace
and security has increased operational demands and mission frequency.
Canada’s dependence on its allies’ helicopters abroad limits
operational independence and when those aircraft are unavailable,
Canadian troops must rely on ground transportation which is relatively
vulnerable even when armoured.

However, what Hillier
characterized as a “new capability” is essentially a reinstatement of a
strategic capability that aircrews and troops had taken away from them
in 1991. That was when the government of the day, on advice from the
Department of National Defence, retired its original Chinook fleet as
an “economy measure.” They eventually were upgraded by Boeing and sold
to the Netherlands, where they remain a backbone of that country’s
military air transport capability, including troop movement and support
in Afghanistan as part of Operation Enduring Freedom.

Those were
Boeing Vertol CH-147 Chinooks, the largest helicopter ever used by the
CF. To borrow from an old recruiting slogan, there’s no lift like it!
Dubbed the ‘heavy hooker,’ they could lift 25,000 pounds of cargo or
carry 44 troops at up to 127 knots, the rotors driven by a pair of
Lycoming TSS-11C turbines. Its cargo hook for external loads was
stressed for 28,000 pounds. Chinooks were introduced in 1962 as the
CH-47 and A, B and C models saw service in Vietnam. D models were
introduced in 1982 and remained in production until 1994, playing a
pivotal role in the Gulf War, and they continue to be the US Army
standard in the global campaign against terrorism.

Looking to
extend the Chinook’s service life beyond 2030, Boeing began producing
an F model in 2003 and managed to drive down costs through improved
manufacturing processes. Platform operating and support costs also were
improved as were reliability, thanks to, among other things, reduced
airframe vibration, structural enhancements, improved corrosion
protection and a host of electrical, avionics and communication systems
upgrades. Modernization includes more powerful engines, Textron
Lycoming T55-L714s with 4,900 shp each and digital fuel controls.

The
US Army expects to replace its Ds with Fs by 2018 and by the time that
fleet is put out to pasture, the Chinook will have been in US Army
service for at least a century overall. It already is Boeing's
longest-running aircraft program in continuous production, outlasting
every commercial jetliner model as well as the B- 17 and B-52 bombers,
among others. Are there G and even H models out there on the design
horizon?

The F model, however, is “a pretty basic helicopter”
designed to meet the relatively “austere” needs of the US Army,
according to Boeing’s top gun in Canada, retired CF LGen Al
DeQuetteville.

“It does all of the things that Canada wants in
terms of high, hot, heavy – those kind of mandatory requirements,” he
said in an interview in Ottawa on the same day that the Canadian
government’s project team was visiting the sprawling Boeing helicopter
facility just outside Philadelphia. “We find that most of our
international customers tend to need more capability than the F model
Chinook to meet their operational needs.”

DeQuetteville, who
retired as CF Chief of the Air Staff in 1998, said that unlike the
recently-approved purchase of four Boeing C- 17 Globemaster transports,
which are coming off the standard production line for the US Air Force
and yielded a unit cost saving for Canada, the helicopters will require
special options to fulfill their envisaged domestic and overseas
missions.

“Everything from weather radars to long-range tanks,
defensive avionics needs,” he explained. “We have a process under way
now to try and validate the options that Canada would want to pursue to
meet their Statement of Operational Requirements.” There’s also the
follow-on support element of the package. “We will have an obligation
to set up a process to put in place that 20 years of in-service support
with Canadian industry,” DeQuetteville pointed out. “That will be an
element of the Request for Proposal that the government will ultimately
issue.” Typically, Boeing would have 60-90 days to respond to the RFP,
which points to a contract probably being awarded next winter.
DeQuetteville demurred on potential dates, saying only that there could
be discussions about options, a process which would determine how
quickly the company can structure a contract. “Then there’ll be a
government approval process that we'll have to go through that we don't
exactly control,” he said, agreeing that the process could stretch at
least “into the fall time frame.”

The project began as a true
competition set out in an Advance Contract Award Notice (ACAN) whereby
the government explained its intent to contract with a specific
supplier while giving others an opportunity to demonstrate that their
aircraft could do the mission.

The reality was that the Chinook
is the only helicopter capable of carrying the kinds of loads the CF is
talking about, including a full platoon of 30 troops with all their
gear, and the new M-777 howitzer. Although the new 155mm weapon is
titanium and 7,000 pounds lighter than the M-198 it will replace, it
still tips the scales at 9,200 pounds without its tow vehicle and other
components. Even a Lockheed Martin C-130 can only handle two M-777s at
a time, and while a C-17 can carry six, in-theatre deployment with that
aircraft is not practicable.

Whether other helicopter companies
responded to the ACAN is moot. “The government even doubled the amount
of time competitors had to do that,” DeQuetteville said. “But nobody
was able to come forward and meet the mandatory requirements, so then
they entered into the sole-source process with us. There was a
significant difference between the ability of Chinook … and others
that simply couldn't get to the bar.”