Imagine being able to go fishing, mountain heli-hiking, or beachcombing in a vast wilderness; all while enjoying the amenities of a top-end BC resort. 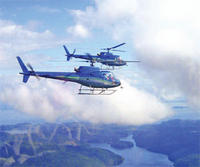 Imagine being able to go fishing, mountain helihiking, or beachcombing
in a vast wilderness; all while enjoying the amenities of a top-end BC
resort. Then add the fact that you could do all of this without
damaging the environment; that you could benignly experience paradise
without destroying it. Since 1984, this is precisely what helicopters
have made possible for the guests of Craig Murray. The Murray family
operates Nimmo Bay Resort. It is an elegant yet rustic collection of
chalets and floating facilities on BC’s central coast, just across the
Queen Charlotte Strait from Port Hardy on Vancouver Island’s northern
tip. Thanks to the access offered by Nimmo Bay’s fleet of Eurocopter
AStar B2 helicopters (owned and operated by West Coast Helicopters,
with four bases across BC) – Murray’s guests are nimbly flown in and
out of remote rivers, glaciers, mountain valleys and isolated white
sand beaches.

“We
do day trips,” Murray says. “Although the guests may be with us for
three or four days, they always stay overnight in their chalets. The
beauty of using helicopters is that we can land virtually anywhere;
allowing our guests to experience BC’s spectacular wilderness without
the need for damaging roads and wheeled vehicles.”

Whether the
guests’ tastes are for fishing or rafting in pure, cold mountain
streams, seeing the world from glacier-tipped mountains 13,000 feet
high, or digging for shells at the Pacific Ocean’s edge, Nimmo Bay’s
helicopters can take them there to see first hand what truly stunning
country this is.

Better yet, these aircraft don’t have to drop
them off and leave. Each pilot can act as the guests’ guide, while the
helicopter is parked close by for the length of their visit. Granted,
an allinclusive stay at Nimmo Bay Resort is not cheap. “Helicopters are
expensive to operate; there’s just no way around that,” says Murray.
“As a result, a three-day stay for one guest costs $6,000, while a
four-day stay costs $8,000.

“When it comes to spending money,
what people really want is good value, and for their expectations to be
exceeded,” he adds. So does Nimmo Bay pass this test? On its website at
www.nimmobay.com, the company offers lots of testimonials from CEOs and
celebrities to prove that it does. The most succinct words come from
William Shatner of Boston Legal and Star Trek fame. “There is a fishing
lodge in British Columbia; it’s called Nimmo Bay,” Shatner writes.
“Best fishing lodge in the world.”

Harper’s Hideaway Report
named Nimmo Bay Resort “Fishing Lodge of the Year” in 1997 and 2000,
while the February 2007 edition of Condé Nast Traveler magazine has a
ten-page spread on the resort.

Craig
Murray has always loved the fantastic fishing offered by BC’s wild
rivers. This is why he opened Nimmo Bay Resort in 1980; both to stay
close to the wilderness and to let his three children grow up
surrounded by beauty.

Four years after opening the resort,
Murray was fishing with Peter Barratt (then of Okanagan Helicopters and
now part-owner of West Coast Helicopters). “We were in a remote area
where we caught two large steelhead in just 20 minutes,” Murray
recalls. “This got us to talking: What if we could use helicopters to
fly guests into isolated, wild fishing spots? We could also fly them in
for river-rafting, take them to glaciers, and on many other adventures
that are possible here.”

This idea led to Nimmo Bay offering
helicopter services from its resort site. The service started with Bell
JetRangers; now they use Eurocopter AStar B2s. As well, changes in the
aviation industry have resulted in Nimmo Bay switching helicopter
operators over the years. Today they are with West Coast Helicopters,
headquartered in Port McNeill on Vancouver Island, which supports them
with 12 aircraft.

Nimmo Bay Resort’s
slogan, “To Fly is Human … To Hover, Divine,” speaks volumes about
the helicopter’s role in its services. Take ‘Heli-Fishing,’ for
instance. Thanks to helicopters, anyone can now fish in the wildest of
locales; even seniors with mobility problems. “We just fly them to a
great fishing location, mountains notwithstanding,” says Murray. “And
if the fish aren’t biting, no problem. We’ll just fly somewhere else!”

Not
surprisingly given its Pacific Ocean location, salmon are the stars of
Nimmo Bay’s fishery; be they Coho, Chinook, Chum or Pink. Steelhead,
cutthroat and rainbow trout, and Dolly Varden char can also be found in
these waters. “To preserve the fishery for generations to come, we
practice ‘catch-and-release’ fly or spin fishing,” says Murray. “The
only thing we take with us is the photo of you with your catch, before
we release it back into the wild.”

Nimmo Bay’s helicopters also
take guests on a range of riverborne adventures. They can ride the
rapids in a large inflatable raft (with professional leadership at the
helm); or kayak and canoe as they see fit. Want to visit a pristine
white sand beach, with not a soul in sight? A helicopter can take you
there! Want to look down from the top of the Coast Range mountains, or
throw snowballs on a glacier field? Nimmo Bay’s fleet can take you
there too. You can also explore huge limestone caves, or marvel at
killer whales in the waters of Johnstone Strait, after the helicopter
has flown you to The Naiad Explorer, a whale-watching boat. Anything in
Nimmo Bay’s 50,000-square-mile flying range can be visited.

At day’s end, it’s back to the resort for a gourmet meal, music, or a relaxing soak in an outdoor hot tub.

Wilderness
isn’t just Murray’s bread-and-butter; it is also something that he
cares for very deeply. This is why the resort’s electricity comes from
a water-driven turbine that was mounted in 1982 at the base of a nearby
waterfall. The resort has been recycling since 1981, and since 2000 has
used a hydroxyl waste water treatment system. In recognition of its
efforts, the resort won BC’s Environmental Award for Industry,
Business, and Labour. “Since 2005, we have served as voluntary
environmental watchdogs for the Ministry of the Environment,” says
Murray. “We keep a close eye on what’s happening in our territory, and
alert them if something is wrong.”

Helicopters fit neatly into
Nimmo Bay Resort’s environmental philosophy. “We leave nothing behind,
except perhaps helicopter skid marks, when we fly from the mountaintops
and the river shores,” Murray observes. “Thanks to our
catch-and-release policy, our guests get to enjoy this region’s great
fishing without affecting its health. As closely as we can, we live in
harmony with nature.”

HERE FOR YEARS TO COME

After 27
years, Craig Murray is still going strong. However, he is grooming his
eldest son, 29-year-old Fraser, to take over the resort one day.
Fraser, his brother Clifton and sister Georgia all worked at Nimmo Bay
as they grew up.

“Today Clifton is pursuing a career as an
actor, and Georgia as a singer,” Craig Murray says. “Given how much
music we play at Nimmo Bay – at the resort, and even in the helicopter
headphones using iPods – I’m not surprised that they’ve been attracted
to the arts.”

As for the future of this helicopter-reliant
resort, which only takes 18 guests at a time? With rave reviews from
celebrity visitors such as Shatner and Virgin’s Sir Richard Branson,
Nimmo Bay Resort has the reputation, the facilities, and the uniqueness
to prosper for decades to come. “We take care of the land, and it takes
care of us and our guests,” says Craig Murray. Add in the access and
minimal environmental impact offered by helicopters, Nimmo Bay Resort’s
future is promising.