Features Procedures Safety & Training
To Pursue or Not to Pursue

READER’S QUESTION: I have just finished reading Mr. Armstrong’s article on training and am keenly interested in his advice to pursue this as a career. 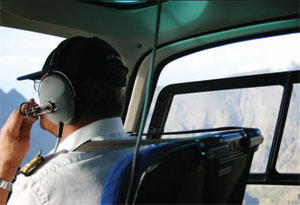 READER’S QUESTION: I have just finished reading Mr. Armstrong’s article
on training and am keenly interested in his advice to pursue this as a
career. I am 52 years of age with a FW private pilot’s licence and want
to pursue my dream of obtaining a Commercial Helicopter Licence with
the hopes of making a living at this profession. My family has grown
and my wife is successfully settled in her career. Given the current
expanding helicopter market, would it be wise to pursue this goal?

RESPONSE: My first mental response was: Don’t give up your day job!
However, discussion with my wife and deep subsequent thought leads me
to respond: We only live once, follow your dream! What would your state
of happiness and fulfillment be in latter years if you don’t take on
challenges and reach goals? But first, the deliberations. I should
advise readers that further communications with Bill provided the
following: He is a very successful businessman with considerable
management background. Moreover, he is physically very fit and prepared
to invest considerable time, effort and money during his training and
job search.

It may seem a daunting task to take on a new
aviation career at age 52 with diverse topics such as meteorology,
aerodynamics and regulations – to name a few that trip up novices.
Although considerable review will be required, Bill has already
conquered most of this challenge with his fixed-wing licence. That
training taught not only the ground school topics, but also judgement
and decision-making skills. He also has an asset the young sprogs don’t
have – people and life skills. None of these assets are minor and these
skills will propel you forward in the industry very quickly once you
land your first flying job.

The next major challenge when one
enters a love life with helicopters might be one’s marriage. It takes a
strong and independent woman to tolerate the pilot/spousal absences of
three to six weeks, and a high percentage of rotary-wing marriages
fail. It was my wife’s understanding and support that are largely
responsible for my rewarding commercial career. Many others had to make
a choice between wife and helicopter and left the industry. “Away time”
is the major obstacle that must be broached by any couple contemplating
a career in the most exciting aviation available to mankind. As always,
there is a price to be paid on every endeavour.

Anyone leaving a
very successful occupation to enjoy the thrills of helicopter flight
must anticipate a drop in cash flow and many months as a student in a
subservient relationship, commonly with a young instructor. Make no
mistake, there will be challenges and plateaus in learning that would
make you question your decision. Initially, you will find the
helicopter impossible to fly and will likely question your decision to
follow that dream. However, after a few hours of gaining a modicum of
mastery, your smile will reach your ears and you will realize you are
entering Nirvana.

After graduating and acquiring your first job,
you will find you must dedicate yourself to serve the customers and
your employer. Your own personal wishes will often take a distant third
place. This juggling of interests won’t surprise you having been
successful in sales-related work; however, it can sometimes take the
pleasure out of flying. Some might suggest you obtain a private
helicopter rating and buy a helicopter to follow the passion on your
own terms – and that is a good argument as well.

Of course,
obtaining that first fling-wing job might be a challenge as a few
operators will think you are too old. However, I believe, given your
background and physiologically younger age than 52, you will have more
luck than some young folks. You see, most companies are run by people
our age. This level of maturity respects all types of experience. The
young hire-ons are often hit-andmiss with their attitudes and lack of
people skills. Even with my military training and instructional
background, quite frankly, I was an accident looking for a place to
happen as an early commercial helicopter pilot. The emotional maturity
that comes with age is a valuable commodity not lost on middle-aged
employers. Many of us sexagenarians don’t see ourselves as
over-the-hill and the number of jobs we are offered confirms the
industry feels the same way. Don’t misinterpret my observations; the
young-uns have a great deal to offer too – but that’s the topic of a
separate article.

Another question might be: “How long do you
plan to work in the commercial helicopter world?” Is this to satisfy a
craving or are you in for the long term? You also need to find suitable
responses for the following queries: Will it be worth the approximately
$30,000 training investment if you might want an early retirement? How
does your wife feel about the length of your working career plans? Have
you accepted the somewhat increased risks of accidental death and
potential for accidental disabilities compared to executive work? Are
you prepared to “apprentice” in the industry by spending some time in
dusty, smoky bush camps fighting forest fires or other applications
that make a smoggy, polluted city job seem appealing? Are you prepared
to take a drop in pay for a number of years?

If some of these
obstacles prove insurmountable, another route for you to consider is
the private helicopter licence as a final goal. This would allow you to
achieve the objective of becoming a helicopter pilot while maintaining
your current lucrative professional position. It would also allow you
to more readily assess the desirability of flying helicopters for a
living. It may turn out you love flying choppers but don’t like the
commercial concept. Then you can buy or rent as you wish. I have
numerous friends who have pursued this course and are completely happy
with the outcome.

Due to the shortage
of experienced helicopter pilots, it seems my peers are working to ripe
old ages in the industry. Coupled with the expansion of rotary-wing
aviation worldwide, the industry looks set for continued growth. Your
rosy dream is worth pursuing as long as you accept not only the
benefits but also the limitations imposed by your age and industry
demands. The final response to your ponderings is that you should work
with your family to achieve an unemotional accounting of the pros and
cons in your desire for a career as a commercial helicopter pilot. Then
decide.

I invite other readers to respond with their own
opinions – especially helicopter company managers who may well be
looking for a man with the above-noted talents and can potentially help
Bill along the way.