Although I haven’t lived in Toronto for years, I am still a Torontonian born and bred. Even today, I bear the attitudes and ego that so mark me to other Canadians. But none of my Toronto traits can explain to me why any resident would oppose the use of police helicopters to find missing persons, conduct car chases safely and improve officer safety. Yet this is precisely what a group called ‘Stop The Choppers’ is trying to do. 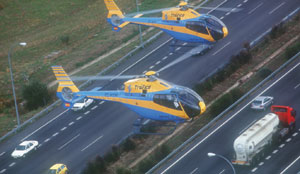 Although I haven’t lived in Toronto for years, I am still a Torontonian
born and bred. Even today, I bear the attitudes and ego that so mark me
to other Canadians.

But
none of my Toronto traits can explain to me why any resident would
oppose the use of police helicopters to find missing persons, conduct
car chases safely and improve officer safety. Yet this is precisely
what a group called ‘Stop The Choppers’ is trying to do.

Specifically,
it opposes the efforts of the non-profit group RASAR (Regional Air
Support and Rescue) who would like to fundraise and then donate three
Eurocopter EC-120 helicopters to first responders in the Golden
Horseshoe, with one of these units being donated directly to the
Toronto Police Service for its exclusive use. Stop the Choppers’
apparent spokesperson is Helen Armstrong, given that she’s the contact
on the group's website. I e-mailed Armstrong asking for an interview.
“I am sorry but I don’t have time at the moment,” she replied,
directing me to www.stopthechoppers.ca to provide her group’s case.

Fair
enough: The site does make the group’s position crystal clear. “Stop
the Choppers is very opposed to any use of helicopters for policing in
Toronto,” said Armstrong in a deputation to the City of Toronto’s joint
Budget Committee/Policy and Finance Committee meeting on February 23,
2001. “Police statistics show that crime in this city is at a 25-year
low. We therefore can’t justify spending money on helicopters. Toronto
does not need night-time military style surveillance. We are not
Bosnia, or even Los Angeles. Our research shows that in an emergency,
helicopters can be borrowed from the OPP or RCMP, usually for free.”

To
bolster her case against police choppers, Armstrong cites a 2001 City
of Toronto report on the Toronto Police Service’s six-month helicopter
trial that ended on January 31 of that year. In a NOW Magazine article
published in October 2002 she wrote, “it bears repeating that city
auditor Jeff Griffiths concluded in his March 2001 report that the
copter neither reduced crime nor helped with high-speed police chases –
the whole raison d’être behind the copter project in the first place.”
So I downloaded the “The Evaluation of the Air Support Unit Pilot
Project,” submitted by city auditor Jeffrey Griffiths, from the
website. I soon discovered that it did not support Armstrong’s
representations of the report's conclusions.

What Griffiths
actually wrote was: “We can conclude from our evaluation that the
helicopter did make a positive contribution at many of the calls it
attended. However, it was not possible to determine if the benefits
provided by the helicopter outweighed its cost.” By cost, Griffiths
means the “approximately $2 million to $3 million” needed to buy the
helicopter, plus the funds to maintain it.

This said, he has no
doubt that the helicopter helped Toronto police do their jobs. For
instance, “A faster response time results in the helicopter being first
on the scene more often,” Griffiths wrote. “Due to the speed of the
helicopter in getting to the scene there is more likelihood that the
crime may still be in progress and the suspects still at the scene or
in the immediate vicinity. This, together with the aerial perspective
of the helicopter, increases the probability of locating and
maintaining surveillance of the suspects and increases the likelihood
of apprehension by police ground units.”

Beyond helping police respond to calls quicker,
Griffiths’ report said the helicopter helped save time and money. “Of
the 40 officers interviewed, half reported that time was saved as a
result of the support provided by the helicopter,” he wrote. “The
estimates ranged from 2 to 600 hours for search-and-rescue activities
and from 1 to 150 hours at other types of events.”

He added: “To
determine the magnitude of potential officer time saved during the
pilot project, we extended these estimates to all 789 events that the
helicopter attended. This extrapolation resulted in a best-case
estimate of 3,200 police officer hours being saved. In dollar terms,
the value added by the helicopter based on the estimated 3,200 hours
saved during the pilot project is approximately $160, 000.”

Most
strikingly, Griffiths included testimonials to demonstrate how the
helicopter had made a difference during its six-month trial. “Last week
an elderly man went missing near the Guild,” said one respondent. “He
used to live around the Scarborough Bluffs. It was the middle of the
night. The helicopter covered an area within five minutes (the coast
area) that it would have taken 20 men working a whole shift to do.”

“I
was helping my 13-year-old son doing his Community flyers on Vaughan,”
said another respondent. “On and about Vaughan/Cherrywood, on the
cement sidewalk there was a man running after a female, caught up with
her, knocked her down and started beating her. As onlookers rushed to
the scene, the young man was showing off his knife. My neighbour called
the police on his cell. In about two minutes the air patrol was there
with their spotlight. The main point is that the helicopter does work.
The cop came later and [was] heading for the wrong direction.”

In
summary, the 2001 City Auditor’s Report cited by Stop the Choppers does
not support the group’s opposition to a police helicopter. Instead, the
only real doubt Griffiths raised was whether the city could justify the
expense at a time when money was scarce.

“It can be argued that
the cost of the helicopter, at approximately $2 million to $3 million,
is marginal relative to the Toronto Police Service 2000 operating
budget of over $557 million,” he wrote. “However, in absolute dollars,
the cost of the helicopter is a significant expenditure that must be
considered in the context of competing priorities within both the city
and the Toronto Police Service, and at a time when continued funding
for some programs is being carefully scrutinized.”

Fair enough;
cash was tight and remains tight in Toronto. This is why RASAR wants to
donate the aircraft and servicing to the city. “There’s no room in the
city budget to spend $2 million on an EC-120 and $1 million annually to
operate it,” says RASAR president and CEO Trevor Harness, a former
police officer and pilot who works as a flight controller for the
province of Ontario’s air ambulance program. “That’s why RASAR wants to
use private donations to help out; as has already been done by citizens
in Edmonton and Calgary.”

Stop the Choppers objects to
privately-funded helicopters as being potential pawns of the
corporations who help fund them. So does Globe and Mail columnist
Heather Mallick. In a November 12, 2005 article, “Why I Hate Police
Helicopters,” Mallick attacks the notion of privately-funded cop
choppers. In cities where such schemes have been allowed, she wrote,
“the list of corporations that have donated money to this dreadful
scheme include banks, drugstores, giant American chains and law firms
that already keep records on your money, your prescriptions, your will
and your marriage.”

The results from 1,001
Torontonians surveyed by Environics Research in January 2001 are cited
by Griffiths in his report. When asked, “Do you strongly support,
somewhat support, somewhat oppose or strongly oppose the use of
helicopters by the Toronto Police Service?" the majority of residents
(87%) were supportive and more than half (53%) of those who were
supportive expressed strong support,” Griffiths wrote.

“Residents
were subsequently asked whether or not they would support the use of
helicopters by the Toronto Police Service “at a cost of approximately
$3 million per year?” Even with the cost of $3 million attached to the
helicopter project, the level of support continued to be a majority in
support of the initiative (68%).”