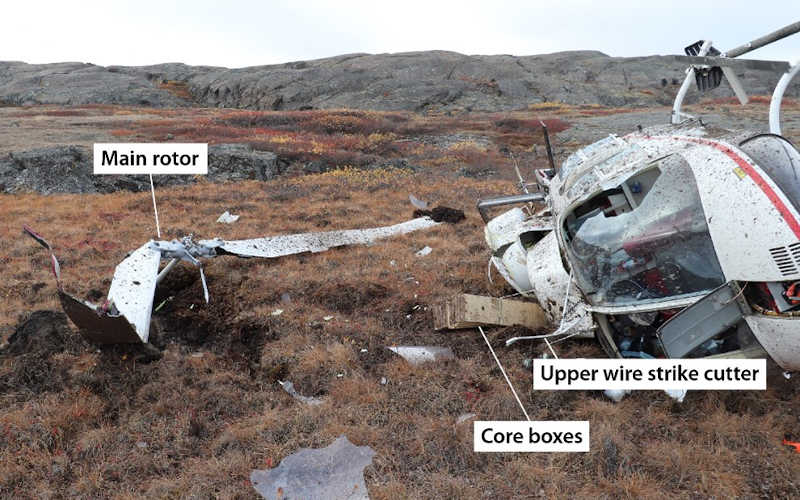 The helicopter tail boom was damaged, with the vertical fin and tail boom rotated 180 degrees. The tail rotor remained attached with damage to one blade indicating a low-energy impact with the ground. (Photo: Royal Canadian Mounted Police)

The Transportation Safety Board of Canada in late March released its investigation report (A21C0088) into a dynamic rollover involving a Bell 206L-1 helicopter near the Hope Bay Aerodrome, Nunavut, back in September 2021. The TSB conducted a limited-scope, fact-gathering investigation into this occurrence.

The accident involving Canadian Helicopters Limited, which was doing business as Acasta HeliFlight Inc., during a number of visual flight rules runs from the Hope Bay Aerodrome (CHB3) to move people and equipment to a mining area. The pilot conducts 13 takeoffs and landings beginning early in the morning of September 14.

During an approach later in the day to the drill site, the pilot noticed a driller waiting for the helicopter who was in a crouched position and looking at the helicopter tail area. TSB explains this caught the attention of the pilot, who was concerned that the tail may be in conflict with the upsloping terrain. After landing on its skid gear and maintaining a 52 per cent torque power setting, TSB explains the pilot removed his left hand from the collective, opened the right seat pilot’s door, and leaned out to look back at the helicopter tail.

The helicopter then began to roll over on its right side, explains TSB in its report, and the pilot attempted to regain a hold of the collective. During this dynamic rollover, TSB explains the main-rotor blades contacted the ground and broke apart. The driller was fatally injured when he was hit by rotor blade debris.

See the TSB investigation page for the full report.